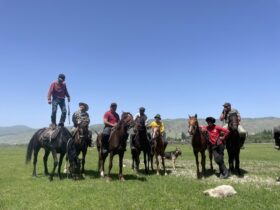 Studying Abroad in Kyrgyzstan: The Wonders and Drawbacks of a Cultural Experience Far From Home

Between September 1793 and July 1794, the National Convention of France operated a “Reign of Terror” defined by the mass execution of potential counterrevolutionaries in the name of national peace. One of the proponents of governing through terror, Maximilien Robespierre, argued: “terror is nothing else than justice, prompt, severe, inflexible [and that]the government in a revolution is the despotism of liberty against tyranny.” In other words, the government may suspend the inalienable rights of its citizens in times of crisis. The ends (peace) justify the means (terror).

On September 14, 2001, the United States Congress expanded the constitutional powers of the executive branch to include the legal authority “to retaliate against any person, organization, or State suspected of involvement in terrorist attacks on the United States, but also against foreign States suspected of harboring or supporting such organizations. Finally, the President may deploy military force preemptively against terrorist organizations or the States that harbor or support them, whether or not they can be linked to the specific terrorist incidents of September 11.” Post-9/11 national security laws have allowed for a permanent retaliatory war with unclear operational and legal boundaries.

The “Global War on Terror” certainly requires an extraordinary military response; the list of “legal” military responses has grown to include drone strikes and Joint Special Operations Command (JSOC) missions on potential terrorists in foreign states, states which Congress has not declared war on. The president may suspend the constitutional rights of citizens (by Amendments V and VI of the US Constitution ) and non-citizens (by Articles 3 and 10 of the Universal Declaration of Human Rights), in the name of peace. Once again, the ends justify the means.

Criticism of this “paramilitary arm of the administration” is well publicized. However, a new report released last week by Amnesty International in conjunction with Human Rights Watch has brought the Obama administration’s policy on global terrorism into the spotlight. The organizations claim that several drone strikes have been a “clear violation of international humanitarian law,” citing the failure to apply due process before applying the “capital punishment” administered by a Hellfire missile. Further, “Amnesty International has serious concerns that this attack violated the prohibition of the arbitrary deprivation of life and may constitute war crimes or extrajudicial executions,” and that those responsible for ordering the aforementioned attacks (presumably President Obama and his military-intelligence team) should stand trial. (Note: The White House has challenged Amnesty International’s latest report, reiterating that all counterterrorism operations are “precise, lawful, and effective.”)

Drone strikes and JSOC missions are both morally and legally questionable as evidenced by the intentional killing of American citizen Abdulrahman al-Awlaki, a 16-year old civilian living in Yemen, who was killed as punishment for his father’s (Anwar al-Awlaki) crimes and for who he might become—a terrorist made in his father’s image. Furthermore, these missions have a negative impact on America’s ability to effectively engage in diplomacy because of the anti-American distrust and resentment that grows in targeted regions.

I anticipate three defenses of President Obama’s drone policy and subsequent internal law and human right’s violations: (1) drone and JSOC strikes are effective in eliminating terrorist threats; (2) “terror” implies a murderous policy; and (3) war is ugly and why should the US government be indicted for trying to suppress terrorism? I would respond as follows:

(1) Yes, US drones possess deadly accuracy on selected targets and spare the endangerment of US troops in volatile regions such as the Afghani-Pakistani border. However, despite their precision, drone strikes, night raids, constant aerial surveillance—and most dramatically, the killing of innocent civilians—only fuel greater anti-American sentiment. Terrorism is as rampant and threatening as ever. Al-Qaeda and its global affiliates are expanding in spite of successful US operations to kill top commanders. America needs to “win hearts and minds”—drone strikes do not accomplish this goal.

(2) True, President Obama has never advocated the killing of civilians. In fact, he has publicly expressed regret about civilian causalities in war zones. But as in every conflict, civilians have died and the constant threat of a bellicose America is terrorizing people around the world. Exploded missile fragments can be found near kill sites in Somalia, Yemen, and Pakistan; to those finding these ordinances, the “Made in America” message is clear. Children in Pakistan have grown accustom to drone flyovers and are left wondering “am I next?” The CIA’s East African kill list has been contracted to Somali warlords. Perhaps the mother of all surprises has stemmed from Obama’s willingness to detain foreign journalists who speak out about errant American strikes. This is not a covert “Global War on Terror.” Citizens of Mali, Thailand, Panama, Yemen, and more than 70 other countries know all too well that they may become the next in a long line of unsuspecting victims, and from their perspective, America is to blame.

(3) Yes, war is ugly. Soldiers and civilians die at the hands of Allied and insurgent forces. Millions have been displaced. However, murdering—via drone strikes—over 400 innocent civilians in Pakistan is unacceptable, as is the murdering of American citizens abroad. And committing murder in the name of ending murder is nonsensical. But killing without oversight is undermining the very moral and legal fiber of the United States (not to mention bilateral relations with countries in which drone strikes have occurred) and international institutions such as the United Nations—the very institution established to end unchecked killing.

Civilians in the Afghanistan-Pakistan border refer to American JSOC forces as the “American Taliban.” In their eyes, America has become the very monster they promised to destroy. America has scarred and radicalized an entire generation, and as a result the number of “terrorists” will only grow. America’s “despotism of liberty against tyranny” must end, but how does a war like this end? Perhaps Yemeni political activist Abdul-Ghani Al Iryani’s advice is best: “In the fight against al-Qaeda and the extremism it represents, we can do it the easy way, by killing, and thus have to do it again and again, or the hard way and really solve the problem. To truly fight al-Qaeda and similar groups, we must deal with the root causes of its growth—poverty, injustice, lack of rule of law…and drone strikes.”

Update 11/4/13: correction made to the caption for accompanying photograph.