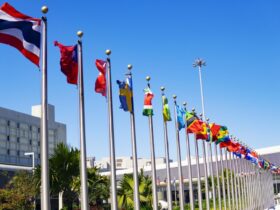 Top 10 International Issues to Look Out For This Election

On July 15, Russia quietly tested their newest space weapon, launching a mysterious projectile from the Cosmos 2543 satellite, which was, for all official purposes, meant solely to act as an inspection system. Despite the Russian Foreign Ministry declaring that it was simply collecting information, both the United States Space Command and the United Kingdom Space Directorate have confirmed that the object possesses the characteristics of a weapon, likely one meant to target other satellites.

This test comes on the heels of a Russian trial of direct-ascent anti-satellite missiles in April, and their experimentation with a nuclear-powered cruise missile that exploded in late 2019. Besides the obvious security concerns these new weapons pose, the increasingly frequent arms tests in space raise two important questions: Are there internationally agreed upon guidelines for space war? Or, is space an unclaimed frontier under no one country’s jurisdiction?

The answer to these questions is both yes and no. ‘Yes’ in that there technically is a United Nations treaty governing the activities of countries in space; ‘no’ in that it is often not heeded, does not include many provisions regarding space conflict and, considering current technological advancements, is extremely out of date as it was written in 1967. The treaty, known colloquially as the Outer Space Treaty, states broadly that all countries are free to explore space (assuming all risk involved, as well as liability for any damages that may occur), though none may claim sovereignty. It also asserts that weapons of mass destruction are forbidden in the Earth’s orbit and beyond, but makes no reference to less lethal weapons in space or anything that may target another country’s property and technology rather than human lives.

The Outer Space Treaty became the backbone of international space law, and from it came four supplementary agreements, though these deal not with space conflict but with the logistics of resolving damage caused by space objects, the safety of astronauts, maintaining strict records of objects in space, and the protected status of the Moon and its resources. These too are relatively outdated, with the most recent of them being written in 1984.

With a surge in the creation and testing of space weaponry since the turn of the century and the only international space laws being obsolete, independent organizations have taken this issue into their own hands. Two projects, in particular, decided it was time for a refresh and have been writing legal manuals detailing the laws of space conflict, similar to those created by independent organizations for other domains of war, such as the San Remo Manual for naval conflict. The Manual on International Law Applicable to Military Uses of Outer Space (MILAMOS) Project was started in 2016 by Mcgill University to clarify the position of international law on the use of force in space, and has received widespread international attention and support. The Woomera Manual is the other major project seeking to fill the gap in outer space regulation. A joint effort between the University of Exeter, the University of Adelaide, the University of Nebraska, and the University of New South Wales Canberra, the Woomera Manual is intended to be the conclusive document on military and security law as it applies to space. Both projects plan on publishing their completed works next year.

Besides the actual protocols and rules for space conflict, the consequences of potential confrontations also need to be considered and planned for. Any weapon that destroys another man-made creation in space‒ whether the result of an intentional attack or a test‒ creates thousands of pieces of debris that continue floating in space without any established method to get rid of them. This debris, which would still continue traveling at orbital speeds, can in turn crash into other space objects, creating a positive feedback loop that could end in Earth’s lower orbit becoming extremely polluted and inaccessible.

In 2007, China tested an anti-satellite missile by destroying an out of use satellite. The missile accomplished its goal, but this single test created the largest debris field in human history. The U.S. military keeps tabs on large objects in space to predict possible collisions, and China’s ASAT test created 30% of the debris being tracked. Apart from space objects owned by the government or used for military purposes, satellites crucial for daily life that provide services like internet access, GPS signals, and weather information could be collateral damage.

If not kept in check, even the testing of weapons in space, without any actual conflict, could significantly damage the technology we rely on.

More and more countries around the world‒  including India, Iran, France, Japan, and others‒ are developing military space programs, thereby increasing the risk of reckless actions and tests without any consideration for the consequences. It is imperative that international regulations be promptly developed and agreed upon to ensure that the testing and deployment of space weapons does not jeopardize the safety of Earth’s people and resources.