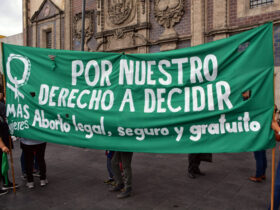 The Abortion Debate: What Colombia’s New Law Means for the Rest of South America

By Anya Moturi and Lauren Schulsohn

LOS ANGELES — Though there is no universally accepted definition of a political prisoner, the most widely accepted one is that of the Parliamentary Assembly of the Council of Europe (PACE). PACE states that if certain freedoms are violated, and someone’s imprisonment or its length and conditions are politically motivated, that person would be considered a political prisoner.

Amnesty International, one of the world’s largest and most powerful human rights-focused non-governmental organizations, takes this one step further with its “prisoner of conscience” designation. The label is for a subset of political prisoners who have “not used or advocated violence or hatred but [are]imprisoned because of who they are (sexual orientation, ethnic, national or social origin, language, birth, colour, sex or economic status) or what they believe (religious, political or other conscientiously held beliefs).”

In 2020, 148 people from 28 countries were considered prisoners of conscience, including Iranian human rights lawyer Nasrin Sotoudeh, Venezuelan trade unionist Rúben González and Crimean rights activist Emir-Usein Kuku. There are also numerous others who were at one point recognized as prisoners of conscience but were later stripped of the title — a list that includes human rights icons Nelson Mandela, Aung San Suu Kyi and most recently, Alexei Navalny (though he was soon reinstated as one).

As a major player in international human rights, Amnesty International’s statements can have monumental impact — especially when the organization revokes prisoner of conscience status. With this in mind, the question arises whether this label is more helpful to human rights efforts than it is harmful.

Anya: A Harmful Label and the Case of Alexei Navalny

Apart from being a flashy buzzword, the term “prisoner of conscience” adds nothing the designation “political prisoner” cannot convey, all while having the demonstrated downside of making the conversation around these people more about their classification rather than the human rights violations they experience.

Alexei Navalny was deemed a prisoner of conscience by Amnesty International in January 2021, after he was arrested in Moscow and later sentenced to over two years in prison on unwarranted and politically motivated charges. He was delisted one month later after an investigation by Amnesty verified claims that he had previously made derogatory comments about refugees, migrants and various ethnic minority groups in Russia.

After Navalny was stripped of the title while he was still imprisoned in Russia, all news surrounding his case immediately switched from talking about the bogus charges to discussing the delistment, pulling people’s focus away from the most important part of the issue: freeing him. Days after Amnesty International’s decision was made public, Julie Verhaar, acting Secretary General for the organization, herself noted that “the speculation around Amnesty International’s use of the term ‘prisoner of conscience’ is detracting attention from our core demand that [Navalny] be freed immediately.”

In Amnesty’s official statement revoking the label, it said that this would not affect its advocacy on Navalny’s behalf, and that it would “continue calling for his immediate release” and “do everything [it]can to reach that goal.”

Since Amnesty does not do anything differently for those it considers prisoners of conscience versus your run-of-the-mill political prisoner, and, as seen from Navalny’s case, the label can cause harm to those who desperately need help, there is no reason for its continued usage.

Lauren: A Helpful Label and the Case of Aung San Suu Kyi

While Moturi argues that the term “prisoner of conscience” is just a flashy term, she couldn’t be further from the truth. This term provides a distinction between prisoners that have committed wrongdoings and those who have taken great risks for either bettering their country or simply just being themselves. I think we can all agree that the latter should receive greater support.

Aung San Suu Kyi, former State Counselor of Myanmar and Minister of Foreign Affairs and de facto leader, was a political prisoner of conscience, having spent nearly 15 years in detention from 1989 to 2010. Suu Kyi led non-violent campaigns that demanded democratic reforms and free elections. The demonstrations she helped organize were suppressed by the army of Myanmar, and when a coup gained power in 1988, Suu Kyi was placed under house arrest. Suu Kyi came to be known as a powerful representation of peaceful resistance against oppression and adversity. In 1991, she was awarded a Nobel Peace Prize and in 2009, Amnesty International gave her the Ambassador of Conscience Award, their top prize.

However, Suu Kyi’s image has suffered greatly due to her government’s poor response to the Muslim Rohingya crisis in Myanmar. The international community has claimed that there was a genocide brought about by the Myanmar government against the Rohingya minority group. In December of 2019, Suu Kyi denied these claims, stating that there had been no orchestrated campaigns against the Rohingya. She would not even refer to the minority group by their name as her government continues to deny the existence of the Rohingya ethnic group.

As a result of these dangerous political views, despite Suu Kyi not being a prisoner anymore, she was stripped of her designation as an Ambassador Conscience, which was a title given to her due to her previous status as a prisoner that promoted human rights.

Dangerous rhetoric and an inability to act in the face of extreme inhumanity should not be accepted and most certainly not rewarded. If we help and praise prisoners that bring harm upon others, we will be complicit in inflicting pain for various groups in the future. Moreover, if Amnesty International actively campaigns for prisoners that are spreading hate and causing violence, it will lose its credibility as an institution, which will affect their ability to help other prisoners who genuinely are heroes.

Nevertheless, in practice, grouping all prisoners together would be difficult for Amnesty International as they have a limited amount of resources, and must find a way to differentiate which prisoners they are willing to help. These distinctions help Amnesty International retain credibility as they will only fight for prisoners that are not promoting violence in their country. We must keep these distinctions to protect people that could be affected by more dangerous political prisoners, such as Suu Kyi, by not giving them sympathy and legitimacy.

I understand where Lauren is coming from regarding her statement that Amnesty International cannot be seen campaigning for those inciting violence or supporting discrimination and hate, but Amnesty supports the freeing of prisoners wrongfully jailed on political charges regardless of whether they are deemed prisoners of conscience or not.

Recognizing this, it seems unnecessary to continue using the term. Nevertheless, a potential compromise could be stricter criteria and increased stringency on the background verification done before someone is elevated to a prisoner of conscience — doing so could prevent a situation like Navalny’s from happening once more.