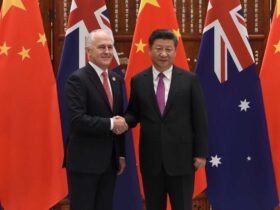 A Balance Between Trade and Security: The Delicate Reality of Australia’s Relationship with China

The police, adorned with riot gear, broke through the apartment door and detained the two women. On Nov. 20, the journalists were both charged under Part 1 of Article 342 of the Criminal Code, accused of disrupting public transport. Days later, police searched Andreyeva’s apartment and detained Andreyeva’s husband, Igor Ilyash. He was sentenced to 15 days in prison for allegedly participating in another protest, despite his claims that he was not there.

Leading up to the arrests, protests erupted in August 2020 in Minsk after the sixth presidential election in Belarus. President Alexander Lukashenko, who has been president since 1994, won the vote. His presidential style, which many call a brutal dictatorship, is infamous for its restriction of civil liberties and frequent human rights violations, including rampant police brutality.

Prior to their arrest, Chultsova and Andreyeva reported the news regarding his presidency. Both journalists worked at the television channel Belsat TV, a Polish satellite television channel aimed at revealing the true nature of Belarus. Because Belarusian journalism is so highly restricted by Lukashenko’s regime, much of the reporting is done by outside human rights organizations and media. Those that are within the borders of Belarus are either not officially recognized by the administration or are highly regulated and often misrepresent the issues plaguing the country.

The trial opened on Feb. 9, with both Andreyeva and Chultsova pleading not guilty. On behalf of the Belarusian government, the prosecution argued that their reporting caused a spread of misinformation leading to the congregation of protestors and an increase in the magnitude of the rally.

They concluded that this made it easier for protesters to resist arrest. Linguistic experts on behalf of the defense noted that the reporting of the journalists “only described what was happening and was neutral in nature.” Nevertheless, the judge found Andreyeva and Chultsova guilty and sentenced the journalists to two years in a general-security penitentiary.

An appeal was prepared by Andreyeva’s former lawyer, Siarhei Zikratski, but was denied in April 2021. Zikratski was disbarred in March 2020 for lacking the proper qualifications but many have argued that it is because of his defense of Andreyeva.

In a text exchange with Glimpse from the Globe Zikratski wrote: “All these actions [appeals]are possible protection mechanisms within the national legal system.”

“But we understand that there is no law in Belarus right now,” he wrote. “Therefore, these mechanisms are important: first, in order to prove to everyone and to ourselves that we [have]use[d]all possible legal mechanisms for protection; secondly, to start using international legal mechanisms.”

When asked about potential international avenues for justice that could be pursued, he said that it remains difficult.

“Unfortunately, Belarus doesn’t sign many international conventions, which could be used for the protection of Katerina Bakhvalova,” he wrote. “The most likely protection mechanism is the International Covenant on Civil and Political Rights.”

On the day of sentencing, Andreyeva stated: “I want to devote my energy to the creation, building the new Belarus without political repressions. I demand an acquittal for myself, for my colleagues, and for hundreds of political prisoners.”

Andreyeva’s statement reflects the prominent role of journalists in the continued fight for a fair, free and democratic Belarus.

Seven months following the rejection of their appeal, several organizations, including the Viasna Human Rights Centre, the Belarusian Association of Journalists and the Belarusian Helsinki Committee, released statements categorizing them as political prisoners. Moreover, many governments, non-governmental organizations, and news outlets have released statements and called for their release, including both the U.S. Helsinki Commission and the U.S. State Department. The European Union also condemned the illegal imprisonment.

On Feb. 18, the U.S. State Department released a statement declaring: “We stand with the brave people of Belarus and support their right to free and fair elections.”

The statement also called for the release of all journalists being held. By releasing this statement, the United States solidified their support for further independent research into election irregularities, reaffirmed that every Belarusian citizen is entitled to freedom of speech and assembly, and acknowledged the Lukashenko administration’s failure to uphold these rights.

Moreover, the State Department took action against the Lukashenko regime by enacting the Presidential Proclamation 8015 to impose visa restrictions on individuals responsible for undermining Belarusian democracy. However, these sanctions have not effectively discouraged further human rights violations by the government.

In the months following this statement, the U.S. Helsinki Commission, a government agency promoting human rights and military security in the OSCE region, also expressed its support for the journalists, calling for the “U.S. administration to revoke access to the U.S. financial system for the nine largest state-owned companies in Belarus.”

This request has not been met by the Biden administration.

Additionally, Polish President Andrzej Duda called on the Belarusian authorities to grant increased press freedoms and civil rights while also calling for amnesty for both convicts. Despite the good intention of this statement, amnesty would require those in prison to admit guilt. Chultsova and Andreyeva have previously stated they do not want to admit guilt.

Chultsova and Andreyeva are still in prison awaiting release some time in 2022 or 2023, depending on when the court determines the start of their sentence. Zikratsk has encouraged readers to write letters to voice support and post on social media to raise awareness on the topic.

When asked about the current condition of the journalists, Zikratsk said, “At the moment Katerina is in the colony.”

He went on to describe the conditions of the colony.

“On the one hand, the conditions in the colony are better than in the detention center, as she has more opportunities for fresh air and better living conditions,” he wrote. “On the other hand, she is working now, so she doesn’t have time to answer the letters of her relatives, friends and all those who support her with letters.”

He said that it is important that her story, and others, are not forgotten.

Because the government can still censor what letters the prisoners receive, the notification of the letter being sent can be reported through a lawyer in which case both Chultsova and Andreyeva will know of their support and solidarity.

Andreyeva’s legal team is making strides for her release through legal avenues.

“We always used all legal ways to release Katerina Bakhvalova,” Zikratski said. “While I was still a lawyer, I managed to prepare and file an appeal against the court verdict. Then, another lawyer filed a supervisory complaint. At the moment, we are considering the option of filing another supervisory complaint.”

In November 2021, President Lukashenko categorized Belsat TV as an extremist organization, meaning employees, and even viewers, could face up to seven years in prison. This is a continuation of the Lukashenko regime’s crackdown on journalism, with no end in sight.

The EU, the United States and several other international actors refuse to recognize Lukashenko as the legitimate leader of Belarus and have imposed sanctions as a response to voter tampering and the crackdown on civil liberties. Despite these blatant objections to the election results and the imposed sanctions, Belarus has shown no progress towards reforming its prejudiced judicial system and undemocratic institutions.

In order to promote lasting change, many believe that neighboring democratic countries in Eastern Europe and the greater international community must speak out against the authoritarian dictatorship that has oppressed Belarusians for over two decades. Activists believe that placing pressure on the Belarusian government by imposing harsher sanctions and “naming and shaming” in order to force Lukashenko’s resignation or removal and ensure the integrity of future elections are important first steps.

Zikratski said that citizens must pressure international organizations and their leaders to pay attention to these issues and fight for democratic freedoms.

“We are sure that the way out of the current situation in Belarus lies in Belarus itself,” he said. “Only the citizens of Belarus can and must make their choice. However, foreign states, citizens, [and]international states can push the existing regime to negotiate with their own citizens.”

Katsyaryna Andreyeva and Darya Chultsova believe that if major democracies claim to fight for human rights, they must do so unequivocally — not just in their cases, but for all Belerusian citizens.

Readers interested in writing letters to the journalists can do so at the address below.

Top Photo: Belsat TV journalists Katsiaryna Andreyeva (right) and Darya Chultsova (left) embrace each other in a defendant’s cage during their trial in Minsk on February 18. (CNN)

Darya Chultsova was born on February 20, 1997 in the Mogilev Region of Belarus. Armed with a degree in Journalism, she started her career in camera reporting before making a shift to camera operator. At the time of her imprisonment, she worked at the television channel Belsat TV.

Katsyaryna Bakhvalava, who goes by the pseudonym Katsyaryna Andreyeva, was born in Minsk, Belarus in 1993 and graduated from gymnasium №23. She spent two years in Spain as an English teacher before returning to Belarus to work as a journalist for Belsat TV.

Faith Hotchkiss is a senior at the University of Southern California pursuing a double major in International Relations (Global Business) and French. She is enthusiastic about the partnerships between public, private, and nonprofit sectors and their work towards global change. Specifically areas with regard to racial and gender equality, human rights, and climate change through the means of marketing and global communication.