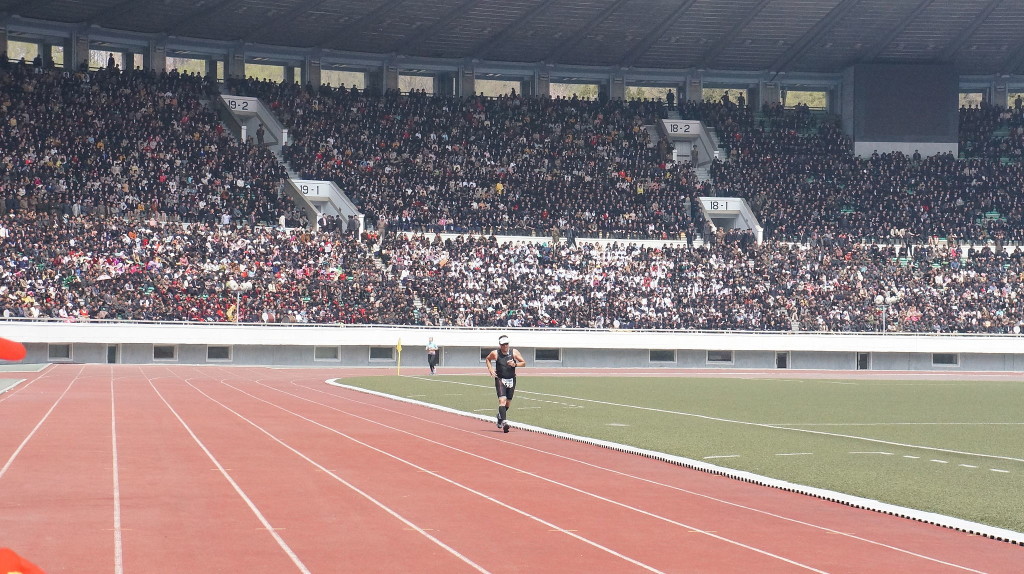 A runner enters a full stadium to finish the final lap of the 2014 Pyongyang Marathon. April 13, 2014 (Uri Tours/Wikimedia Commons)

In January 2014, North Korea announced that the annual Pyongyang Marathon would be open to amateur foreign runners. (In previous years, the event was only open to elite foreign runners.) Pyongyang seemed to be finally opening up to the rest of the world by hosting a public sporting event—a potentially fun and sportsmanlike way for foreigners to see North Korea. Even Americans, North Koreans’ greatest enemies, were allowed to register in a seemingly apolitical gesture. There were, of course, restrictions for all foreign runners, including a three-hour time limit for the full marathon and mandatory lodging at state-sanctioned hotels. To get into the marathon, runners had to register via a North Korean tour agency like the China-based Koryo Tours, a standard procedure for all tourists traveling to North Korea. The 2014 event was quite successful by North Korean standards: over 300 participants ran the 42-kilometer course through the nation’s capital.

The anticipation for the 2015 marathon on April 12 was even higher. The North Korean government opened up several hundred spots in the race for foreigners and even disseminated a bizarre promotional video to a remixed version of A-Ha!’s Take On Me. Over 400 tourists registered for the race through Koryo Tours alone. That is, until the North Korean authorities banned foreigners from entering the country due to the Ebola scare. Beginning in October 2014, North Korea restricted its borders and quarantined all foreigners for 21 days. The race was not exempt from these constraints and all foreigners were banned from joining.

According to North Korean propaganda, Ebola is a deadly virus created by the US military to promote its interests abroad and undermine North Korea. With this mindset, it comes as no surprise that North Korea set up harsh restrictions against all foreigners, including those from countries with no exposure to the virus. In early March, the government finally lifted the travel ban and allowed foreigners to continue with their marathon tourism plans. However, the damage was already done. Although some runners had expected stumbling blocks during the registration process and adopted a “go with the flow” attitude, other runners canceled their reservations and race registrations. One tour group, Uri Tours, extended their registration deadline to March 20, but flights out of both Shanghai and Beijing were almost completely full. The only available flights were through Air Koryo, a poorly rated North Korean airline. Tour companies, marathon runners and spectators all got the short end of the stick because of North Korea’s politicized reaction to the Ebola virus. Ultimately, Pyongyang was able to recover from the drama; by April 12, the race had enough registered foreign runners (650) to set a record for its short history.

However, the North Korean government has bigger problems to worry about than the success of its marque marathon. The Pyongyang Marathon fell during a sensitive time; the DPRK’s relationship with the rest of the world has been particularly rocky since February 2013 when the country launched its third nuclear test. Since then, Kim Jong Un and his government have continually threatened their opponents with military force. The 2014 UN report on human rights abuses in the country added even more pressure; in October and November, the UN repeatedly recommended that the North Korean leadership be referred to the International Criminal Court. As expected, the government reacted negatively to these accusations against its supreme leader, calling the report “political fraud.” Furthermore, in March, the US and South Korean participated in joint military exercises, a practice that always elicits an angered response from the North Korean leadership. The military exercises are a display of the heavy military presence at the southern end of the DMZ and a reminder of exactly what North Korea is up against. Unfortunately, the military exercises sparked violent retribution. In March, a South Korean man attacked the US Ambassador to South Korea, Mark Lipper, claiming to be fighting for North-South reunification. The North Korean government called it “just punishment for US warmongers.” North Korea used similar language during the Sony hacks that involved the film “The Interview.”

The Pyongyang Marathon might have been a success for the country’s tourism industry, and even a sign of a thawing relationship; however, the race did not reveal any fundamental changes in the North Korean regime. It remains authoritarian and dependent on the propagation of a perceived conflict with the US and its allies to preserve domestic stability.