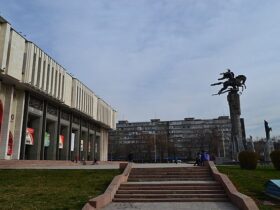 Constitutional Chaos: The Turbulent History of Kyrgyzstan’s Constitution and Its Impact

In the 1990s, scholars argued that “the EU would rule the 21st century by virtue of its proven capacity to manage and regulate a continental sized economy.” Such assertions of confidence in the European project are now forgotten. Instead, the Union is currently dealing with the uncertainties of Brexit, an internal solidarity crisis in response to refugee flows, rising right-wing populism, lasting repercussions of a sovereign debt crisis and the first negative consequences of what has remained a halfway-house currency union. In times of Brexit Europeans are hearing Armageddon-like prophecies, predicting that “the EU might only have 10-15 years left to remain relevant in the 21st century”. But while the Union’s internal problems enjoy lively discussion, the Union’s foreign policy remains on the sidelines.

Why deal with the external dimension, if the internal union is in disarray? Rather than restating the internal benefits of being a member of the Union, we should not forget the perks of membership with regard to foreign affairs. One can argue that it is the external dimension in which the EU is strongest and in which it now has the chance to reinvigorate its raison d’être. If this is too delicate a time for further internal integration, maybe it is the time for strategic external readjustment.  This is not a new idea and indeed, through its fledgling foreign policy, the Union has already become more than just the sum of its parts. This is most obvious in the trade dimension: united, the EU is the biggest trading block world-wide, with a larger GDP than that of the US. Split into 27 individual member states, most of these countries will relapse into insignificance. Take President Obama’s word for it, when he dampens Brexiteer’s rejoice by placing them ‘at the end of the queue’ in trade relations with the US.

Reducing the EU to its identity as a trade giant however would be a severe oversimplification: in its stated aims at least, it looks to contribute to international peace and security, respect for human rights and fundamental freedoms, the promotion of democracy and the rule of law.

With consequent institutional reforms and increasingly prominent foreign policy operations, the EU has indeed proven that its foreign policy dimension has potential, but it has yet to convince with a coherent external vision. As a post-Westphalian construct in a world of sovereign states, it needs to clarify EU identity on the world stage, rid itself of double standards and identify strategic interests.

Struggling with Identity:
The Union is often characterized as an actor between federalist state and intergovernmental organization. Yet certain scholars argue that it should in fact be treated as a sui generis entity. This nature is often described as ‘post-Westphalian’ in contrast to the Westphalian, sovereign concept of the state, where realism and balance of power dominate. The Union can be viewed as a manifestation of internal, rule-based multilateralism, a principle that is central to its external relations as well. At times it is referred to as a Normative Power, where moral values are thought central to an actors’ aims; a Civilian Power; and a Trading State – and in all cases, as a “compulsive multilateralist”. Pursuing a rule-based global order is common to all of these identities, but their aims differ: should this be a normative global order, a civilian one or one that prioritizes stability for trade relations?

Normative aspects are strong in the EU’s rhetoric and aims: its treaties specify the foreign policy aims of promoting democracy and human rights. In reality, however, its priorities mostly lie in ensuring stability and establishing relationships for trade. For example, the EU’s Neighborhood policy is widely criticized for superficial engagement towards authoritarian regimes: its push for ‘good governance’ reforms remains painfully ineffective and is not followed up by genuine incentives. While it is questionable how much the EU could achieve in terms of structural, normative change without attracting accusations of neo-colonialism, it is apparent that it has chosen the complacent approach by working with regimes rather than genuinely engaging civil societies.

Ever since the EU’s wake-up call to its military unpreparedness (the NATO operation in Yugoslavia and Kosovo), the Union has been increasingly aware of a changing security environment (read: Crimea, Syria) and its dependence on US-led NATO protection. An EU army remains a distant daydream and the security debate now centers around how the Union can profile itself as an indispensible element within NATO, rather than as incapable junior partners to the US. With increasing calls for rearmament and multiple ongoing peacebuilding missions, it appears that the EU is also rethinking its civilian power outlook.

The only identity that appears to hold up is that of the Trading State. The Union has established a wide-ranging network of bi- and multilateral frameworks across the globe, ensuring trade relations with former colonies, developing countries and emerging economies. While its trade relations can be labeled economically successful, they do not necessarily contribute to a positive perception of its “actorness” on the world stage. This can be largely attributed to two phenomena: the upholding of double standards especially with regards to its trade regime, and a lack of shared strategic interests.

Double Standards:
The once dominant normative power narrative has been severely eroded by fingers pointing at the Union’s double standards in both trade and values. The European Union remains the single largest donor of development aid globally and supposedly supports development through preferential trade agreements. However, the EU’s internal market situation skews the playing field significantly: while market access is still preferential to a certain extent, developing economies’ main exports such as sugar, rice and milk cannot compete with the highly subsidized local production of these goods. What is given in the form of aid is thus practically discounted through the EU’s trade policies, where the protection of local agriculture reigns supreme.

Furthermore, emerging economies hold the EU liable for being a multilateralist only when it suits its own interests. Seeing its dominant role within the WTO, the EU has chosen to play conservative and continues to pose a counter-force to reform in Doha round negotiations. Powers on the rise such as China and India are disappointed by the EU’s unwillingness to push for more democratization at the international level; speaking values while promoting pragmatism has not furthered the Union’s reputation on the world stage. To enhance its image, the EU needs to address the double standards inherent to its current foreign policy, and turn its narrative down a notch. The EU should promote an outlook of ‘global responsibility’ in place of ‘ethical power’.

Strategic Interests:
While it has begun to stretch its arms beyond the neighborhood and towards traditional allies, the ‘domaine reservee’ of ex-colonies and emerging strategic partners, these relationships remain little more than trade pacts. While the EU holds extensive association agreements and strategic partnerships with all major powers, it seems to build these partnerships on the lowest common denominator, rendering the term ‘strategic partnership’ practically meaningless: instead of restricting its outreach to regions where it holds strategic interests, its policy of constructive engagement resembles a friendly overstretch. A failure to define these partnerships significantly weakens its external image, encouraging emerging countries, especially Russia and China, to return to bilateral diplomacy with member states of special interest to them.

Possible Remedies?
We have seen that EU foreign policy has become more than a natural outgrowth of the Union’s day-to-day business – it has become a decisive tool in determining the Union’s relevance on the global stage for the next 5-10 years. While internal unity is a natural prerequisite for a strengthened EU foreign policy, I would suggest that initiative for reform must now come from the institutions (especially the European External Action Service and the current High Representative) formulating a Foreign Policy vision that can convince its member states of the benefits of further integration when it comes to foreign policy, as well as a united voice abroad.

Creating a new vision for itself, one that escapes the usual criticisms leveled at its normative power narratives will require a serious rethinking of its identity and role in global affairs. Coming to terms with a changing global system is a first step towards placing itself between civilian and hard power, normative and trading power extremes. Acknowledging overstretch and contradiction in its ambitions and identities lies at the center of a reorientation. A second step, and one that it can avoid no longer, is addressing the tension between development and trade and promoting a higher degree of value coherence in its actions. Lastly, the problem of superficial partnerships can only be addressed once the EU has found a durable identity for itself, one that allows for the concrete, strategic aims of an actor that is larger than the sum of its member states.

Gesine Höltmann is a student of Liberal Arts and Sciences with a focus on International Relations and a Minor in International Law at the University College Maastricht, the Netherlands. Gesine is fluent in German and English, conversationally fluent in French, and hoping to improve her Dutch before leaving the Netherlands in June. During her semester abroad at the Chinese University of Hong Kong she studied Mandarin and Chinese and South-East Asian regional politics. Her regional interests also include the European Union and the Middle East, which she studied at the London School of Economics. At Maastricht University, Gesine was involved in the founding of the Global Order Project. She also conducted undergraduate research on the challenges that Pegida, a populist right-wing movement, poses for German democracy. Gesine’s political interests range from Germany’s international prospects to the foreign policy of the European Union, domestic and foreign policy of China and the regional dynamics of East Asia. Gesine plans to pursue a career in International Public Policy.