Latin America Will Feel the Worst of Climate Change

The success of the Paris deal must be looked at  relative to the shortcomings of previous attempts at agreements. While it is an improvement from Copenhagen, it is sorely lacking in certain respects, making it challenging to forecast its long term impact on reducing carbon emissions. Of most immediate consideration is the inconsistency of the legal requirements and legally binding nature of the agreements. While the national reporting of emissions is legally binding, the actual target countries set are not. This does make headway in transparency and  accountability, but non-legally binding targets leaves the agreement without enforcement mechanisms.

Compounding this shortcoming is the fundamental question of how to reach the newly suggested limit of 1.5 degrees Celsius.  While the agreement makes ample use of suggesting mitigation, adaptation and the use of incentives to reduce greenhouse gas emissions, there is no mention of actual policies put in place to accomplish this. Economically, Pigovian taxes in the form of carbon taxation are considered to be amongst the more effective policy tools, but they are subject to deep political opposition as well as uncertainty in how to price carbon. This gulf between the rhetoric of the agreement and the actual tools used to implement it in individual nations may prove to be a key impediment.

At its core, climate change is a global tragedy of commons. While it is in the best interest of all to reduce emissions, there is a tendency to free ride. This dynamic seriously deteriorates the prospect of a substantive agreement. While the Paris agreement provides measures for reporting and monitoring emissions, it fails to establish legally binding requirements and mechanisms for enforcement. In light of this, it is too early to determine if the Paris agreements are an actual success, or merely a continuation of empty rhetoric.

The historic climate deal that was struck in Paris last week is a true cause for celebration. The world managed to create at least a partially legally binding agreement to address what most respected scientists have called the gravest issue of our time. Time will tell the extent to which the agreement was effective, but, for a few days, the world can rightly pat itself on the back. Yes, the plan does not quite cover the total carbon reduction necessary to reach only two degrees Celsius warming by 2100 that scientists have set as the benchmark for maintaining today’s biological and geographic features, but it sets a precedent.

It is imperative, however, that we take a moment during this celebration to pause and examine what must happen next. Here I would like to bring attention to  five steps made by John Sutter at CNN that the world should take in order for COP21 to reach its full potential.

First, every country must ratify the agreement—sounds simple until you consider that the legislative bodies in the United States are filled with “representatives” that have taken upwards of $97 million from energy lobbyists in the past year alone. Support for ratification should be demanded of every political candidate up for election in the coming year. Second, Sutter argues that the world should stop subsidizing fossil fuels—a noble, very realistic goal that would cut carbon emissions by 11% by 2020 if only 20 major countries stopped their subsidy programs. Third, a global carbon tax should be imposed in order to correct and pay for the negative externality produced by the carbon-creating fossil fuel industry, an idea supported by Exxon Mobil and already being rolled out in cap-and-trade form in China. Fourth, the world needs to move towards a political consensus nationally, not by pointing fingers, but through adult discourse and clear and ever-present education campaigns that help teach fact. Fifth, finally and most importantly, the world needs to invest in greener energy forms, and that does not mean natural gas. That means competitive solar, wind and geothermal technologies, along with other developing forms of non-carbon emitting energy. Even Bill Gates says people should start betting on renewables.

Just as a humorous aside, the response from the energy community merits some consideration aside from the plaudits that the delegates so rightly deserve. In a response to the Paris Agreement, Brian Ricketts, the head of Europe’s coal lobby, said “The world is being sold a lie, yet most people seem to accept the lie, even if they do not believe it…The UN has successfully brainwashed most of the world’s population such that scientific evidence, rational analysis, enlightened thinking and common sense no longer matter.” The outburst has been blamed on stress and desperation. To that, I say good. It should be the coal lobbies that are scared, not the world’s population dealing with the complications from their pollution.

As many commentators have pointed out since the conclusion of COP21, this is a fantastic deal—if it was 1995. The tragedy of creating an international agreement is that everyone has to sign on to it. This means that measures that could be useful, such as global carbon tax or mandatory carbon caps, are thrown by the wayside. This isn’t to discount what what was done at COP21; as Jeffrey Sachs remarked, “it was a great diplomatic triumph.” Unfortunately, the time for diplomatic triumphs was twenty years ago.

Global environmental norms are twenty years behind the pace of development—and it shows. It shows in the projected cost of climate change to economies across the globe, especially developing ones. It shows in the millions of climate refugees that are going to be misplaced in the next fifty years. And it shows that solving climate change, though not impossible to mitigate in theory, might be beyond the reach of what we are able to accomplish as a species. Voluntary emission caps and five year accountability mechanisms are great progress, yes, but if that’s all we can muster, then it is too little too late for planet earth.

Another year, another “historic” climate summit. The Obama Administration and its admirers will no doubt paint the COP21 accords as a major indication of President Obama’s enlightened leadership in international affairs, not unlike the negotiation of the Trans-Pacific Partnership or the Iran Nuclear Deal. And if I were in the Administration, I, too, would desperately hope that a string of on-paper accomplishments could save my boss’s legacy from the ISIS/Putin/South China Sea/expansionist Iran mess his foreign policy has failed to stop.

Unfortunately, I doubt the COP21 accords will have anywhere near this resuscitory effect. Shrill environmental activists will continue to preach doom, gloom and apocalypse in the years to come, precisely because COP21, in itself, won’t do much to reduce carbon emissions. For one thing, carbon reduction targets are voluntary with no enforcement mechanism, so even if some newfangled climate bureaucrats in Geneva or New York wanted to halt India’s or China’s growth to save the Earth, they couldn’t. That’s the nature and fate of nonbinding international agreements.

And the agreement focuses primarily on energy efficiency and green “renewable” resource use, which are all well and good, but are fundamentally not the movements that have been leading to decreased carbon emissions in environmentally conscious countries.

What force has been cutting carbon emissions? Why, expansion of the use of clean-ish fossil fuels like natural gas, in part made possible by the environmental left’s least favorite technology, fracking (which, yes, is not as clean as renewables but IS immensely cheaper and more practical, and has thus had more of an impact). The natural gas revolution of the last decade has offered evidence that you can fight climate change and promote fossil fuel-driven economic growth at the same time. This apparent verity, however, is not well-embraced in the foundation and advocacy world, so it won’t make its way up to the world of international climate diplomacy anytime soon—to the detriment of both the climate and the developing world’s working poor.

It’s easy to be cynical about the weakness of the COP21 agreement. No emissions reductions are required before 2020, and the $100bn per year in international financing doesn’t come close to what is really required for the appropriate emissions cuts—upwards of $800bn per year some are saying. Cap-and-trade is still considered a useful mechanism for emission reduction, despite its failings in the past decade. It remains unlikely that heavily polluting developed countries will take responsibility for the damage global warming has and will cause in the developing world as we move towards a 2C rise.

But I still think there are things to applaud. India is committed to an expansive solar and wind energy project to reach their goal of 40% non-fossil power sources. China wants 20% of its energy to be non-fossil by 2030. That means developing renewable energy capacity equal to the US’s entire capacity. These aren’t fake neoliberal gestures. These are rational acts by countries with something to lose. India suffered a devastating heat wave earlier this year that killed over 2300 people, and the city of Chennai experienced record-breaking flooding as the summit was taking place. In China, it’s well known that smog is killing urban centers.

COP21 isn’t enough, but it works OK as a tattered flag for domestic mobilization. The Keystone XL pipeline was defeated by organized citizens, not the government. And it will be up to people to push states beyond the Paris Summit. Global fossil fuel subsidies cost the world $5 trillion per year.  Here in the US we should talk about that. And to respond to some of my colleagues, no, natural gas is not the solution. Sure it’s better than oil, but when you account for the damage done by gas leakage – methane is 72 times more effective at capturing heat than CO2 – I wouldn’t even call it an acceptable transitional fuel. 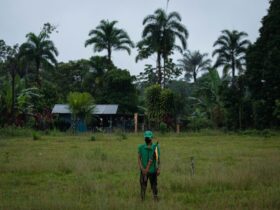