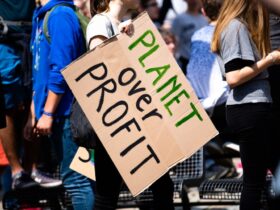 Individual or Institutional Change in Tackling the Climate Crisis: Which Is More Effective?

Years of legal and regulatory battles, protests pitting environmentalists against “Big Oil” and over $7 billion spent – and just a month and a half after receiving final drilling permits – Shell announced its intention to pack up its Arctic oil exploration project and go home. Shell’s controversial Arctic project exemplified the American debate between environmental protection and economic development in the Arctic for years. This ending, a dry well and a hasty withdrawal, is an anticlimax. But the conclusion of Shell’s Arctic adventure is also indicative of the ways in which the economic and geopolitical significance of the Arctic has been overhyped and misunderstood.

Shell’s departure from the northern coast of Alaska leaves just two operational Arctic oil projects: BP’s longstanding Prudhoe Bay field and Gazprom’s Prirazlomnoye rig. Prudhoe Bay produces around 84 million barrels of oil per year (about 240,000 barrels each day), while Gazprom’s rig is projected to reach peak production levels of 126,000 barrels per day. Compare these figures to the world’s gargantuan demand for oil, which clocks in at 93 million barrels per day, and it becomes evident that Arctic oil is less than pivotal in the global energy market.

However, the Arctic has been heralded as a critical new region in geopolitics—combining large resource endowments with security and intelligence buildup and a dash of Cold War-esque rivalry between the United States and Russia. There is data indicating the Arctic’s huge economic potential: the United States Geological Survey estimates that the Arctic holds about 22% of the world’s undiscovered oil and natural gas resources, or about 412 billion barrels of oil equivalent. These resources could be worth up to $17 trillion, a figure about equal to the entire US economy. The hypothesis has been that Arctic countries (Norway, the US and Russia especially) will embark on large oil and natural gas extraction projects—especially as climate change has melted once-impenetrable layers of ice, making vast new oil and natural gas reserves more accessible.

The theory continues that competition for valuable Arctic offshore resources and demand for more infrastructure within the region will induce a military and security buildup. Political rivalries will cause international military presence to explode into an Arctic arms race as countries try to match and then outmatch each other’s forces. There has been increased Arctic military and intelligence investment, pushed most aggressively by Russian buildup. The most striking example of Arctic militarism so far was Russia’s massive 40,000-man, 5-day military exercise in their Arctic territories in March 2015. Security upgrades should occur predominately because of the economic potential of the Arctic; however, the economic consequence of the Arctic has so far been slight. Any activity in the region, where it is not simply correcting a previous lack of attention and investment, may be mostly a matter of competition between countries. For example, Russia’s recent Arctic military exercises were partly in response to Norway-led Arctic Challenge exercises that included several NATO countries alongside nonaligned Finland and Sweden. Russia’s fear of an expansionist NATO thus probably led to its show of strength in the Arctic more than any practical, economic rationale. Projects like Gazprom’s Arctic rig underscore the politicking that influences Arctic projects—the rig has been hyper-nationalized and advertised as a national achievement in a way that vastly over exaggerates its actual economic and technologic value.

The Arctic’s final identity is its vulnerability as one of the most ecologically sensitive regions in the world. It has been significantly affected by substantial glacial melt caused by climate change, and could face serious environmental damage from oil exploration and increased military presence. Drilling in the Arctic Ocean is a point of particular concern for environmentalists because of the bleak prospects for containing and cleaning up any oil spills. Countries like the US lack the physical capabilities and technological know-how needed to effectively patrol the Arctic and respond to accidents. Furthermore, the oil and natural gas reserves that the Arctic contains will of course release carbon emissions as they are used for energy. The Arctic thus contains the seeds of its own further ecological destruction.

The debate around future prospects for the American Arctic has been environmental protection versus economic interest.  President Obama was harshly criticized by environmental groups as hypocritical for approving Shell’s drilling licenses while preaching climate protectionism. Whether fossil fuel resources in Alaska should be developed at all has been hotly disputed, pitting US, and especially Alaskan, economic interests against environmental concerns.

The Shell case may be a turning point for more realistically defining the future role of the Arctic because it demonstrates that its economic potential is not as simple as promising geological surveys have made it seem. The recent steep decline of oil prices makes investing in large exploratory missions more difficult and less attractive for oil companies. Arctic projects are long-range, requiring at least ten years from exploration to oil production for the market, and tend to be very expensive, demanding large up-front investments in technology and equipment. Profitability hinges on the unpredictable future price of oil and the size of any finds. A strict regulatory environment, extreme technological and safety challenges, and widespread environmentalist opposition further dissuades projects that might be undertaken, especially those from the US. (Sanctions against Russia, imposed because of the conflict in Ukraine, have similarly stalled Russian projects.) In a very real way, all eyes have been on Shell; their success or failure would help determine the economic future of the Arctic. Their project has ended as a failure with a significant financial and public-relations price tag.

The emerging role of the Arctic in geopolitics should be evaluated more carefully in light of Shell’s departure from Arctic oil exploration. The Arctic’s purportedly vast natural resources have proven less profitable and more politically risky to retrieve than international relations analysts have predicted—to the extent that oil companies are staying out of the Arctic oil game. Without real economic incentives, the political importance of the Arctic becomes more uncertain. Predictions that Arctic shipping routes would become more widely used and economically critical also fell short, with shipping traffic declining in 2014. The same problems with lack of capability and technology affect these shipping routes as well. Although a security buildup will likely continue, without a pressing need to protect valuable economic interests, these investments are more related to rivalries between nations, especially those fueled by Russian nationalism. It may in fact be that the key identity of the Arctic is its environmental insecurity in the face of climate change—a proven issue that needs attention and practicable solutions from the entire world’s carbon emitters.