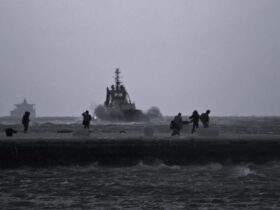 Arguably this summer’s biggest movie, “Top Gun: Maverick” evokes an undeniable sense of patriotism. The imagery of fighter jets and vast, echoing hangers leave many American viewers walking out of the theater thinking: Wow, it feels good to be American. Featuring an unnamed enemy and an emphasis on American exceptionalism, it’s hard not to root for the strong, classically attractive cast of young fighter pilots.

The danger of shiny planes that go fast, however, is the desensitization to war.

Without a clear enemy, the movie makes the fight scenes and preparation seem fun and harmless. Tom Cruise has aged 35 years since the original “Top Gun” and his character is just as indestructible. Protected by actual Navy pilots, none of the characters are at risk of dying, which directly mirrors the United States’ projection of immortality on the world stage.

Despite the increasing power of China and the decline of global U.S. political power, many Americans are quick to argue America’s position as the best country in the world, a sentiment “Top Gun: Maverick” plays into. By allowing audiences to have the childlike glee of watching American fighter jets fly at incredible speeds, “Top Gun: Maverick” has the purpose of propaganda. In 1986, after the original “Top Gun” movie premiered, the Navy saw a 500% increase in enrollment.

After spending  $1.8 million to use Pentagon equipment in this latest  American propaganda film, enrollment is expected to skyrocket once again. While the movie is incredibly exciting and fun, it also serves a very political purpose. In exchange for their equipment, director Joseph Kosinski ultimately created one big ad for the military.

With a recorded $1.4 billion in the box office so far and a 70% increase in requests from filmmakers to work with the military, Hollywood is also reaping the benefits. As of September 5, “Top Gun: Maverick” is the 12th highest grossing movie ever, and the highest of 2022. Movies like “Top Gun: Maverick” make money for everyone involved, while also supporting  U.S. military pursuits abroad.

Additionally, in movies that require military equipment, one of the only ways to afford production is to cooperate with the military. Renting from the Pentagon can save millions, therefore increasing the overall profit. However, working with the government also means they get the final say on the script and final product.

Thus, anything that could possibly shed a negative light on the United States or its heroes gets cut immediately. Even if Kosinski wanted to create a military movie more reflective of the  political landscape in 2022, he likely wouldn’t be allowed to, further emphasizing the fact that “Top Gun: Maverick” is a U.S.-funded and Pentagon-cleared propaganda film.

This isn’t the first time movies have been used as tools of propaganda. Cold War era American films often unapologetically cast Russian characters as the enemy, while Russian films portrayed Americans the same way. There was a clear political purpose to these movies, which made them less relatable to non-Americans. With the unnamed enemy in “Top Gun: Maverick,” however, the world is suddenly able to relate to the American propaganda.

The top four international markets for the film are the United Kingdom, Japan, South Korea and Australia. Not surprisingly, these countries correlate with four of the United States’ closest allies. The clear American exceptionalism may leave a foul taste in a lot of people’s mouths in China or Russia, but U.S. allies have been eating it up.

It makes sense, too. Watching a country that is supposed to be the leader of the free world show off its handsome men and fast planes and weapons should be reassuring for allies.

On another note, the successful relationship between Hollywood and the U.S. government is also exemplified by the $126 million in opening weekend sales. Movies that have had more successful opening weekend sales include mostly pre-COVID Marvel movies, a franchise that is known to have a cult-like fanbase who will go out to the theaters to see the new movies.

With COVID in 2020 and the rise in popularity of streaming services, box office sales have seen  a sharp decline. The only post-COVID, non-Marvel movies that top “Top Gun: Maverick” in sales are “The Batman” and “Jurassic World Dominion.”

The average age of a Top Gun movie-goer was above 35, showing a resurgence of older audiences going to theaters. The box office success can be directly attributed to an audience who fell in love with Tom Cruise in the original “Top Gun” and were willing to leave their homes to experience another exhilarating ride, this time with better surround sound and bigger screens.

Is this movie theater success due to the film’s patriotic nature, or will it continue as a trend? Does Hollywood benefit more from these military movies due to their nature of drawing bigger crowds to theaters, or was that only the case with the “Top Gun” sequel?

“Top Gun: Maverick” explores a new wave of American propaganda, inspiring a new generation of U.S. patriots and allowing the older generations to relish in the days of Cold War films and anti-Russian sentiment.

I’m currently an Intelligence and Cyber Operations major with a Russian minor. I’m also really into photography and art, so I’m really looking forward to being a multimedia editor. I’ve lived in Italy, America, and Indonesia, and am specifically interested in issues in Southeast Asia. In my free time, I enjoy skateboarding and going to the beach!