Trending:
You are at:Home»Features»Op-Ed»The REAL War to End All Wars
By Luke Phillips on August 14, 2015 Op-Ed, Politics and Governance 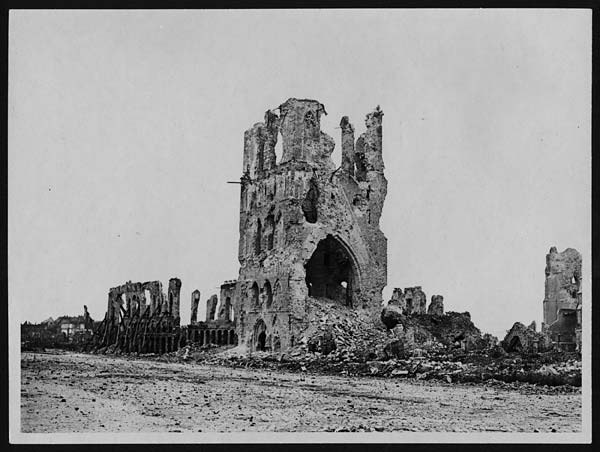 The ravages of war: The Ypres Cloth Hall in Belgium after a battle between British and German forces in World War One. 1918. (Flickr/National Library of Scotland).

However, this gleeful modern laughter at the expense of our forebears obscures a salient point, a rarer interpretation of world history. I would contend that World War One was, in fact, in some ways, “The War to End All Wars.” Or rather, more accurately, “The Prelude to the War to End All Direct Great Power Hot Wars, For Some Time At Least.” That’s a mouthful, but I think it adequately describes what the First World War was for world history: the beginning of the end of a multipolar state system periodically wracked by great power war, and the dawn of the imposition of a new system.

So let’s dissect this newly coined term of mine, this “Prelude to the War to End All Direct Great Power Hot Wars, For Some Time At Least” or “PWEADGPHW/FSTAL” (pronounced, “pwee-dig-foo-eff-stall”) for short.

First off, this is the Prelude—it’s not the War to End All Wars, but its Prelude. World War One directly set the stage for World War Two, and the two are best seen as a play in three acts: the First World War, the interlude of tension and posturing, and the climactic Second World War. Prelude, Interlude, Finale. Let’s call it “The World Wars.”

Direct great power hot wars are distinguishable by a few criteria that must be defined. First, a direct great power hot war is waged directly by the combatants against each other; though they might use proxies as auxiliaries, their regular forces are the primary forces involved. So the US conflicts with the USSR in Central America, where US-armed paramilitaries fought Soviet-armed guerillas, do not fall under this category, because they were indirect.

Second, a direct great power hot war is waged by great powers. These are the major powers in any international system, the quasi-imperial states that can affect power conditions in areas far from their domains and make other great states quiver. Few of these states remained after 1945—only the US and the USSR for a time, to be slowly joined by China. And the United States, Soviet Union and China did not wage direct hot wars upon each other after the Second World War. The direct hot wars that were waged were waged either by a great power on a weaker power, such as the United States on North Korea, or between middling-level powers, such as Iran and Iraq.

Fourth, scale must be taken into account for anything to be considered a war. Someone may bring up the skirmishes between the Soviets and the Chinese over the Ussuri River, or between American GIs and Chinese conscripts in North Korea. In these situations, great powers waged hot war upon each other directly. However, both situations were unofficial, brief and uncoordinated, and thus cannot be called “wars” in the stricter sense of the term.

By definition, then, there were no direct great power hot wars waged from the armistice of 1945 up to the present day. There may have been plenty of close calls when the great powers bumped shoulders, but none of them exploded, and war as was known in the Second World War, the First World War, the Franco-Prussian War, the Russo-Japanese War, the Revolutions of 1848 or the French Revolutionary Wars, did not imperil the world after 1945.

That said, plenty of wars were fought. There were direct great power cold wars (like the Cold War, the present tension between the US and China, etc.), there were indirect great power hot wars (like Soviet and Chinese supply of weapons and supplies to the Viet Cong against the USA, US supplying of weapons to the Afghan mujahedeen against the Soviets, etc.) and there were direct minor power hot wars (like the Iran-Iraq War and the Israeli-Arab Wars).

In the contemporary world, there are many great powers—the United States, Russia, China, India, perhaps Iran and Japan and Germany and Turkey, potentially many others. Between many of these great powers there are direct cold wars and indirect hot wars—for example, the tensions between China and Japan in the East China Sea, or the proxy wars waged across the Middle East by Saudi Arabia and Iran. And the friction is increasing. It appears that there may soon be another direct great power hot war between some set of players.

So, how did the era of the World Wars bring about this reality?

Second, the World Wars absolutely smashed the old multipolar balance of power and replaced it with a balance that was somewhat bipolar, and somewhat unipolar. It was bipolar in the sense that there were two main power blocs: the United States and the West, and the Soviet Union and the East. Bipolar systems have been theorized to be more stable than multipolar systems, and this would explain the relative stability of the Cold War era.

But in other ways, the world became unipolar—the US organized the world outside of the Soviet Union under the United Nations system, drawing it also into the global maritime system it protected with its navy. With a stable balance between the two great powers remaining and a relatively orderly international system for all the rest, the world became apparently more stable in terms of direct great power hot war. The crisis of the World Wars bequeathed to the world these two political realities.

Now, however, advances in technology may soon negate the former tyranny of nuclear weapons, and political and economic shifts have already altered the strategic realities of the Cold War world.

In 2015, cyber technology and space warfare may soon be able to jam the electronics and computers aboard nuclear weapons, rendering them impotent, while advances in precision rocketry and lasers are making possible things the Reagan-era Star Wars program could only have dreamed of. This doesn’t guarantee that we’ll be able to stop all nuclear weapons. But it does add a series of new potential trump cards to the game of international politics. Warfare will take place on a more complicated interface, featuring not only conventional land, air and sea forces, and strategic missile systems, but also space-based systems and cyber fronts. The battlefield will be deadlier and more chaotic – and more uncertain – than ever before.

Meanwhile, the Soviet Union has collapsed, while a host of other great powers have risen. The world is now multipolar, populated by regional near-hegemons whose interests conflict with each other’s. The bipolar world is gone, replaced with a Pre-World Wars system of shifting power centers and alliances and rivalries. In the field of international governance, multilateral institutions like those the United Nations system legitimized have only grown weaker as transnational threats have multiplied. The balanced, relatively ordered world that the World Wars created is gone.

The Prelude to the War to End All Great Power Wars, For Some Time At Least, indeed ushered in a new era in world history. But all eras eventually come to their ends, and the post-World Wars era ended, arguably, with the Cold War. Since 1991, we have faced a world more decentralized, with power centers further apart and technologies more greatly dispersed, than at any point since before the World Wars. It is important to understand the effects upon world order that such titanic events can exert.

But in the final wane of that political order, and its complete replacement with something Secretary Kerry likens to the “19th Century”, it would be well to remember the effect upon world disorder that the dissolution of such balances can have. The rumblings of such conflicts are already sounding, in Eastern Europe, on the Pacific Rim and across the Middle East. These are interesting times.