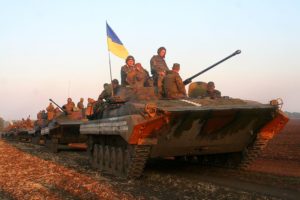 Caption: Some Ukrainian national armed forces were deployed in eastern Ukraine in August 2014. (Ministry of Defense of Ukraine/Wikimedia Commons)

Since the beginning of the Ukraine conflict in 2014, an estimated 13,000 people have been killed, and millions more have been displaced. Five years ago, the Ukrainian government decided not to sign an association agreement with the EU in favor of closer economic ties with Russia. As a result of the popular protests that followed, the Ukrainian President Viktor Yanukovych was ousted, the 2004 constitution was restored, and the Russian annexation of Crimea soon followed. Although the Russia-Ukraine conflict has faded from many headlines, the war in Donbass between Pro-Russian forces and the Ukrainian nationalist opposition has continued, resulting in thousands of casualties. Even more worrying, the weak international response has allowed the Russian President Vladimir Putin to continue its aggressive tactics against Ukraine and the war to carry on with no end in sight.

The Russia-Ukraine conflict stems from a complex shared history with roots tracing back to the 9th century with the first organized Eastern Slavic state of Kievan Rus. However, both sides have conflicting perspectives regarding the history of the Russian and Ukrainian peoples. In the Russian nationalist narrative, although the center of the Kievan Rus state ultimately transitioned to Moscow, there is an overarching unity among the “Rus people”, or the citizens of Russia and Ukraine. Putin himself has proclaimed numerous times that Russians and Ukrainians are “one people” who are essentially part of “a single nation in many ways.”

On the other hand, Ukrainian historian Mikhail Hrushevsky argues that there are three branches which descend from Kievan Rus: the Russians, the Ukrainians, and the Belorussians. This perspective leaves greater room for political interpretation and has been widely accepted by Ukrainian historians.

Because both nations originated from the Kievan Rus state, centered in present-day Ukraine, the assertion of Ukrainian independence in 1991 was a great misfortune in the eyes of many Russians as they lost many historical sites to Ukraine including the Kyiv Perchersk Lavra, a monastery in Kyiv associated with the birth of Russian Orthodox Christianity.

From Stalin to Putin: Fear of Ukrainian National Movement

Because many Russians believe that Ukraine’s sovereignty should be limited, Russia has long seen the Ukrainian national movement as a threat. When the last Russian Tsar was removed in 1917 and the Bolsheviks took power, Ukrainian combatants fought back for several years in the Ukrainian War of Independence. Although Ukraine was ultimately forced to become a part of the Soviet Union, the Bolsheviks were deeply stunned by this resolve to claim total independence and noted it as a cruel lesson to be learned from.

The Ukrainian people resisted Russian rule once again in 1932 when Stalin decided to collectivize agriculture. When Ukrainian farmers fought back against the policy, Stalin responded by sending armed troops to confiscate land and livestock. Although the food harvest was successful in 1932, the Soviet government withheld the harvest from the Ukrainians, and those who attempted to steal food were executed. As a result, an estimated three million to eight million Ukrainians died from starvation between 1932 and 1933 in the Holodomor genocide.

Although Putin’s rule differs greatly from Stalin’s, there are many notable parallels. Once again, the Russian government today is taking action to dismantle Ukrainian national movement. Similarly, Putin has also pursued a greater Russian “sphere of influence” and policies of Russification, or the promotion of Russian language and culture, to increase state control. Additional similarities include a disdain for Ukrainian independence, enforcement of attacks against “enemies of the government,” and a willingness to kill Ukrainians to serve his goal of legitimizing Russia as a major power.

The Future of Ukraine

Since 2014, war has continued on between Russian-backed separatists and Ukrainian forces, particularly in the Donbass region. While many Western nations responded to Russia’s initial military intervention in Ukraine in 2014 with economic sanctions, there has been little international response to recent aggression in the Black and Azov Seas. The currently imposed economic sanctions have fallen short of changing Russia’s behavior, and greater intervention is needed.

A UN deployed peacekeeping mission in the Donbass region could provide a favorable situation for both parties. If peacekeeping forces maintained a ceasefire, this would save thousands of Ukrainian lives at stake and put to rest fears of further Russian aggression, which would be favorable to the international community as a whole. A peacekeeping operation would also create the foundation for the beginning of positive political and economic reform in Ukraine. Additionally, such an agreement would also help Russia save face domestically as the economic sanctions that have created financial struggles for many Russians would be lifted and its’ international reputation would be improved. Although both Ukraine and Russia have expressed interest in a peacekeeping mission in Eastern Ukraine, both have different visions for what such a mission should look like, with Russia preferring a smaller scale operation. As Russia has veto power in the UN Security Council, some concessions to Russia may need to occur in order for any form of a peacekeeping mission to be implemented. However, Ukraine and the West should stay open to discussing the positive aspects of Russia’s proposals as the alternative is the continuation of a devastating war. The priority for both nations should be negotiating an agreement in regards to the deployment of peacekeeping forces, as a neutral third party helping to facilitate negotiations could bring the deadlock in Donbass to an end.

The political future of Ukraine remains largely uncertain. Although no candidate holds an overwhelming advantage, elections will take place at the end of this month and the pace of domestic reform has slowed greatly in anticipation. While it is unclear who will next assume office and what approach they will take to address the current climate in Donbass, it is evident that de-escalation in the conflict with Russia needs to be prioritized above all else; only then can the region stabilize and begin to make positive progress.

Yevgeniya (Zhenya) Gilmore is a Junior majoring in International Relations Global Business and East Asian Languages and Cultures. She has spent two summers abroad studying Mandarin Chinese through the U.S. Department of State National Security Language Initiative for Youth program and the Critical Language Scholarship program. She also speaks Russian and is currently interning for the Virtual Student Federal Service program through the U.S. Department of State. This semester she is also partaking in the TIRP (Teaching International Relations Program) at USC. Her research interests include foreign policy of former Soviet states, and environmental and human rights issues in China.