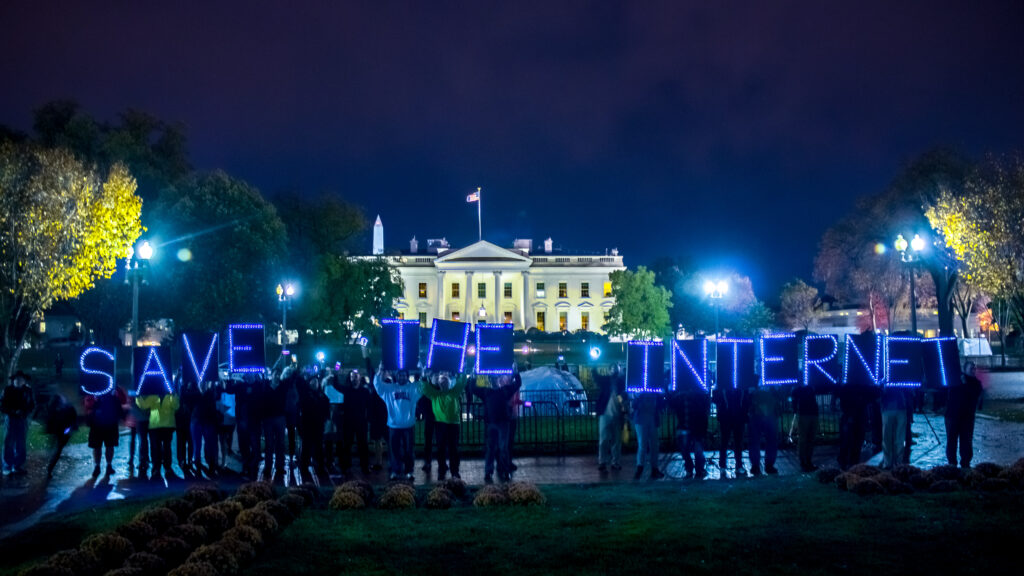 One Internet, Indivisible, with Net Neutrality for All

Darren Wilson, a white police officer, shot and killed Michael Brown on August 9. Brown was 18, unarmed and black. His body lay in the street for four hours. According to Brown’s autopsy results, the teenager was shot from the front, with the shot to the top of his head likely the cause of his death. While much can be disputed about autopsy results – including the distance between the shooter and the victim and whether or not they were moving forwards or backwards – the medical examiner for Montgomery County, Pennsylvania and the director of autopsy services at the Yale School of Medicine both agree with the conclusion that Brown was facing Wilson when he was shot.

It’s always compelling to start with the facts, and no more words should need to be written to argue that the alleged excessive use of force on the part of Officer Wilson is likely another chapter in a long and ugly history of police brutality against black men in the United States.

Police work is undoubtedly a difficult profession with little pay. Being a police officer, like putting on a military uniform, is an honorable profession. But something has gone tragically awry in Ferguson: the evolution of the police force from a protective to offensive force. The killing of Michael Brown is potentially emblematic of a wider trend: according to a USA Today study of FBI data, 25% of the deaths involving a police officer that are reported to the federal government by municipal departments are white-on-black shootings. 70% of SWAT team deployments are for minority suspects. The reality is that minorities – and especially blacks – are disproportionately the victims of shootings by police.

Make no mistake: I’m a white man writing about bad things white people have done, and the color of my skin – and my gender – give me certain societal privileges that mean I will never ever truly understand the plight of being black in America. But a look into the world of police brutality in several other countries offers a deep sense of perspective for all races, and makes the Ferguson tragedy look even more disgusting than it already is.

The revolution in Egypt began on National Police Day in mid-2011. The uprising against military dictator Hosni Mubarak was partially catalyzed by a public sick of a long history of police brutality. Sadly, in the years after the revolution, little has changed. Instances of kidnapping, torture and ill treatment during custody combined with a light sentence for the rare legal action taken against police has left many wondering if the revolution was successful. In December 2013, the BBC interviewed Hussein Fekry, the head of the human rights division of Egypt’s Interior Ministry—who runs the police.

“Torture and cruelty are part of human behavior that doesn’t stop by pushing a certain button,” he told them.

In Mexico, like Egypt, police brutality is often politically motivated. Following the inauguration of Enrique Peña Nieto in 2012, The Guardian summarized the results of an investigation by Mexico’s human rights commission: four cases of alleged torture and nearly 25 unjust arrests. When MVS Noticias interviewed Luis Gonzáles Placencia, the head of the investigating commission, he indicated this was representative of a trend in the Mexican police force to “encapsulate a person, take them away, and then try to justify some kind of link with criminal activities.”

There are three important points of comparison.

The first is institutionalization. In Egypt, where the instances of brutality include systematic rape and kidnapping, there is no apparent ethnic disparity between the police and civilians. In Mexico, where there is also no significant difference between police and victims’ ethnicity, police brutality stemmed from clashes of police and protesters following significant political events. But other than political differences (and the fact that police in Egypt and Mexico vigorously defend the established power), nowhere is two-plus centuries of racism ingrained as deeply into police brutality as in America.

Ferguson makes 25% of its revenue from court fees—and traffic citations and arrests are handed out to blacks in percentages that exceed their share of Ferguson’s population. (Two-thirds of the Ferguson population is black and 94% of its police force is white.) The disproportionate conviction rates in Ferguson and huge diversity gap on the police force leave no doubt: police brutality in America runs much closer to the bedrock of human interaction because it is a manifestation of the worst form of human interaction that began during slavery, continued through sharecropping and the Jim Crow era, and now infects the police and legal system.

Police brutality in all forms is reprehensible because it is an abuse of power and a fracturing of the social contract by those whom society trusts to protect them from harm. But race-based police brutality in America is uniquely shameful because at its foundation are preconceived assumptions about people of color. Eliminating those assumptions must be the cornerstone of any strategy to eliminate police brutality. How can there be a conversation about police dealing with political protests if the police holster a 200-year-old history of prejudice along with their guns?

Hypocrisy is the second point of comparison. Police forces in Egypt and Mexico don’t try and hide behind the guise of democracy, due process and equal protection. Our uniformed police who discriminate people of color hide behind the American Constitution. Police forces in the above mentioned countries destroy evidence of brutality and concoct stories to discredit the accusations. In Ferguson, with the evidence in plain sight (under a blanket on the concrete for a few hours, incidentally), the police, in despicable fashion, chose to release a tape seeming to show Michael Brown robbing a store and then to let the media concoct stories on their behalf.

The third and final straw is the imbalance between those willing to speak out against police brutality and those willing to support it. In Mexico and Egypt, police brutality is often the struggle of the many against the powerful few. In other words, the police usually win because they have the guns, not because they have the support of a significant amount of the population (see any other Arab spring country for an explanation of why this is true). In America, not so: donors have contributed more to a GoFundMe account supporting Officer Wilson than the Michael Brown Memorial Fund.

In the best (and most unlikely case), maybe the imbalance in funds raised is just a manifestation of the bystander effect. Maybe, the optimistic among us might think, people in America who recognize and oppose discrimination against blacks are surely in the majority, but less willing to vocalize their position than the few and far between radical racists among us. That’s not good enough: anyone who doesn’t speak out on the Ferguson tragedy in some capacity is standing complicit with the undercurrent of institutional racism in America.

Which brings to light a more practical explanation: maybe the fund imbalance is more descriptive of how the nation feels about Ferguson than we might think. For example, compare the results of two polls taken by the Pew Research center in August of 2009 and May of 2013. In one poll, 29% of white people interviewed said they felt in touch with the dead. 17% said they had interacted with a ghost. In the other, when asked “Is there discrimination against blacks?” just 16% of white people said “a lot.” 41% said “some.”

More white people believe they have been connected to the dead than believe there is a lot of discrimination against people of color.

If only those white people could interact with the ghosts of Trayvon Martin and Michael Brown. What would they say? Martin and Brown would say the ghosts that haunt people of color in America are not just from our nation’s past, and they aren’t dead. Sometimes, they carry a badge and a gun.