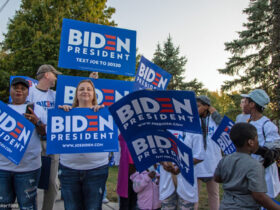 What a Biden Presidency Means for the U.S. Pandemic Response

Evita is everywhere. Her iconic 20th century portrait stares back from postcards, magnets and other memorabilia sold in kiosks lining the most tourist-laden streets of Buenos Aires. But whether remembered with nostalgic affection or bitter eye-rolls, the populist legacy of former president Juan Peron and his wife Eva undeniably transcends the realm of gift shop souvenirs.

For the last thirteen years Argentina was under the statist and socially-oriented policies of the successive husband-wife presidencies of Nestor and Cristina Fernandez Kirchner. The two were frequently likened, by supporters and critics alike, to the Peron regime—especially Cristina and Eva.

Argentina’s drawn-out tango with populism is inescapable, but following the December 2015 victory of his center-right campaign platform, Mauricio Macri is taking active steps to change that. As he cuts government spending and liberalizes trade, he must be mindful of the extent to which the Kirchners are still in the hearts of his constituents. In just two months, the country is already feeling the full force of this free-marketer’s rapid-fire reversal. Notably, the deal he struck with holdout debt owners from the 2001 sovereign default promises the country’s return to international financial markets.

This won’t be a rosy transformation, and many Argentinians resent the painful process of liberalization. Macri faces a number of political risks as a consequence, engendered by two “specters” – the lingering influence of former president Cristina Fernandez and the 15-year debt saga ­– that haunt the Argentine government­. These phantoms dominate Macri’s first ongoing challenge as president: ­securing the deal with Argentina’s remaining creditors while maintaining public favor. So far, a deal led by Elliott Management was reached on March 2 with the four biggest creditors for 75 percent of their claims. While a large step for Macri’s international image, skepticism abounds at home.

At War with What’s Popular

The first round of unfinished business is Nestor and Cristina Kirchner’s lingering populism. The Kirchners’ economically damaging yet politically favorable policies are as pervasive as Eva Peron’s face. Kirchnerismo (not unlike Peronismo) gained popularity precisely by pandering to the masses. For Macri, this means a series of nasty blows to his approval rating as he attempts to enact measures to undo theirs. Freeing the exchange rate, raising interest rates or cutting public sector jobs are, to say the least, unpopular actions. When he cuts the electrical subsidies implemented under the Kirchners, which cost the state a total of up to $50 billion over their terms, the average electricity bill will go up by almost 500 percent. Naturally, this leaves him in a political pickle.

But cuts to government spending notwithstanding, Macri must win the trust and support of a populist base that incessantly demands Cristina’s return as she hovers on the sidelines. The former president took to Twitter to respond to subsidy cuts saying, “Energy is a right, not a privilege.” This tweet alone highlights some of the difficulties of combatting populism. In undoing certain politically motivated economic policies that characterized both Kirchner regimes, Macri appears ruthlessly willing to put his country through political and social pains to implement the free market reforms he believes will “set Argentina on the right path.”

This “right path” is also an attempt to rebrand Argentina’s international image. Besides cutting energy subsidies, lifting currency controls and cutting taxes on agricultural exporters, Macri is turning the Kirchners’ foreign policy on its head. He promptly established a break in the country’s ideological ties with Venezuela and Iran; in his first week he criticized the Venezuelan state’s imprisonment of dissidents and oppression of freedom of speech. Moreover, Macri is canceling an impending deal with Iran to jointly probe a 1994 terror attack on a Jewish community center. Widely controversial, the agreement overlooked evidence suggesting Hezbollah conducted the attack under orders from Tehran. And in a meeting with Joe Biden at the World Economic Forum in Davos, Switzerland, Macri expressed interest in increased collaboration with the US on all fronts—a clear break from the Kirchners’ disdain for American capitalists.

This disdain links Cristina’s live ghost to another phantom: the debt crisis. Last time neoliberalism shouldered its way into la Casa Rosada (Argentina’s White House equivalent) was in the 1990s with former president Carlos Menem, and it ended in the aforementioned debt default. While initiating a wave of privatization, the Menem administration also borrowed an obscene amount, driving up the cost of credit and forcing businesses to close. The opposition associates the debt deal with these fruitless reforms, reflecting a general distrust of the international financial system.

“A country of the future that got stuck in the past,” is how The Economist portrayed Argentina in 2014. It referred here to the populist rabbit hole the country fell into after its former status as one of the wealthiest nations a century ago. Peronism, the article argues, failed Argentina’s democratic institutions by choosing the path of “the quick fix—of charismatic leaders, miracle tariffs and currency pegs, rather than, say, a thorough reform of the country’s schools.”

This perception makes ending the debt crisis more vital still. If the deal is realized, Argentina can finally escape its investor repellant reputation after more than a decade of nationalizations, expropriations and the unforgettable 2001 debt crisis— Macri’s second lingering challenge. This crisis was the largest sovereign default in history at the time—the majority of the debt was settled to 30 cents on the dollar, but many creditors (who were mostly American) rejected the deal. The state’s lengthy dispute with the holdouts became a politicized propaganda war waged under Cristina Fernandez; she dubbed them “vultures”, as they continued to circle back for what is still owed them, 15 years later.

Given this label, the Argentine people have come to regard these “vultures” with a unified hatred. By antagonizing creditors, Fernandez branded them as an enemy of the people – predictable populist move – to further rally the masses. Now that Macri has engaged these would-be villains in polite, well-mannered negotiations, he risks being coupled to their cause as an enemy enabler by incensed Argentinians.

Especially now that they named their price, many call the payment a “ransom” in exchange for Argentina’s access to capital markets. But settling hints at other macroeconomic benefits. As import restrictions go down, Argentina’s foreign reserves will begin to increase. It will help balance the budget and stop the excessive printing currently driving inflation. If Macri can swiftly demonstrate the positives wrought by the deal, he may yet avoid the political risks.

Macri addressed the Argentine congress – which now needs to approve the settlement – two days after the four largest hedge funds accepted it. But this was no victory speech.

“The first thing we have to do is recognize we [Argentina] are not well, even if it hurts,” he said in his opening statement.

While most negotiations concluded on March 2, the deal is far from secure. Argentina must pay $4.6 billion before April 14. If the rest of the holdout creditors agree to the same terms, the total will amount to $11.68 billion.

Macri is not one of the “quick fix” politicians criticized in The Economist, and this debt deal will likely only bring Argentina’s economic woes to the surface. But his reforms represent marked change. Argentina’s historical relationship with populism demands quick results; if, after painful outcomes like high energy bills, Argentines don’t see improvement, it will only fan the flames hungry for populism’s return. Argentina’s economy under the Kirchners put votes and political support over pure economic wellbeing. Yet as Cristina’s name rises to mythic heights among her remaining fans, Macri would be wise to tailor his own image as much as the economy’s.

The new administration cannot fight one phantom without also doing battle with the other. As things stand, Kirchner’s supporters continue to call for #Cristina2019—a hashtag making frightening rounds on Twitter. If freeing Argentina’s market proves more painful than successful, Cristina’s face may one day infiltrate gift shops too.