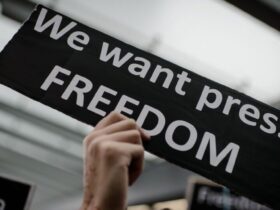 93-year-old Oskar Groening pushed his walker into a German court in April of this year to testify in the opening of his trial. Known by the media as the “accountant of Auschwitz,” Groening has confirmed that he collected money and goods from Auschwitz prisoners. He has also testified that he witnessed violence in Auschwitz and requested to transfer locations, but the request was denied.

“I share morally in the guilt but whether I am guilty under criminal law, you will have to decide,” Groening told the court at the end at his hour-long testimony. He was said to appear sound and healthy at the stand, barring occasional breaks to cough and drink water.

His official charge is 300,000 counts of accessory to murder, which could sentence him to prison for up to fifteen years. In the past, German prosecutors could only charge Nazi guards if they could prove the guard committed a crime against a specific person, a particularly harrowing notion if you consider guards who left no one alive to testify against them. Today, guards can be charged as an accessory as long as there’s evidence confirming their service thanks to a 2011 case that convicted 91-year-old John Demjanuk.

Demjanjuk fought charges against his involvement in the Holocaust for three decades before he died in a German nursing home at the age of 91. In his 1986 trial in Israel, he was sentenced to death before Soviet documents (temporarily) cleared his name. The same documents, however, gave prosecutors grounds to take him to trial again in Munich in 2011 where he was convicted of 28,060 counts of accessory to murder. The court ultimately determined that Demjamjuk was a Nazi guard at the Sobibor death camp and responsible for guiding prisoners to death chambers.

The charges and evidence against Demjanjuk were legally hazy (the only tangible evidence being the aforementioned Soviet documents) and his best efforts to appear frail and old didn’t make a permanent verdict easier for the court. He was released pending an appeal before his death.

The key difference between Demjanjuk and Groening – besides the fact that Demjanjuk was under international scrutiny for much longer – is that Groening is much harder to hate. Demjanjuk feigned illness, tried to avoid extradition and denied being a guard. Groening, however, spoke openly about his time in Auschwitz prior to being charged, and has been forthcoming in court thus far.

Holocaust survivors and their families appear torn on how to handle Groening’s trial. There are 60 of them testifying as co-plaintiffs, including Auschwitz survivor Max Eisen. Eisen initially didn’t think sending a 93-year-old to prison would serve any purpose, but he has since changed his narrative saying that during the trial, “I was just thinking about my baby sister and mother in the gas chamber. This upset me so much.”

Eisen’s change of heart illustrates how trials like Groening’s unintentionally re-victimize victims. Emotional collateral damage is inevitable in trials that bring up long past tragedies. However, these trials are more symbolic than anything, and their main purpose is rooted in Germany’s self-redemption operation. The fact that Groening’s charge is 300,000 counts of accessory to murder indicates that the court’s target is the holistic crime of the Holocaust, not the individual guard.

The Germans have been trying to take penance for Nazi crimes into their own hands ever since the Nuremberg trials, in which the Allied powers had control over the sentencing of major Nazi criminals. The Frankfurt Auschwitz trials in the late sixties saw the Germans taking legal efforts of their own, retrospectively investigating and charging lesser Nazis that had managed to avoid jail time immediately after the war. Prime Minister Willy Brandt’s 1970 silent apology, “Kniefall,” proved to the international community the country’s deep remorse. Germany’s postwar policies of giving out tens of billions of dollars to survivors and practicing pacifism on the world stage show their efforts to change the image of their country.

Even so, a rise in Holocaust deniers threatens both the legacy postwar Germany has tried to leave and the harsh reality of genocides. Although Germany and several other European countries have laws against denying the holocaust, a 2014 study indicates that 11% of Western Europeans who are aware of the Holocaust believe that it has not been “accurately portrayed.” Holocaust denial is much stronger in the Middle East and North Asia; of the 32% of the population that has heard about it, 64% believe that it has not been accurately portrayed. The words of Spanish philosopher George Santayana, “those who fail to learn from history are doomed to repeat it” are particularly haunting today, when Holocaust denial is at an alarmingly high rate and an entire country, Turkey, is denying the Armenian genocide. On top of all that, neo-Nazism, though condemned by the general public, still has a vocal presence in many Western European countries, particularly in Greece.

The logical extreme of deniers and neo-Nazis gaining ground in Western Europe is another genocide, although that extreme is probably unlikely. However, in order to ensure that unlikeliness, it is crucial that the few surviving witnesses of the Holocaust speak up, particularly if they were Nazis at the time.

Survivor and co-plaintiff Eva Kor received media attention for hugging and publicly forgiving Groening. Kor believes that German healing would be best accomplished by asking still living Nazis to speak to the public about their crimes. She hopes that honest confrontation of the past would deter Holocaust deniers.

In Kor’s words, “I forgave the Nazis not because they deserve it but because I deserve it.” Though Kor cannot speak for all Holocaust survivors, her words do show that survivors are capable of creating their own personal justice; such justice is not always the court’s to create.

Groening’s trial sets a dangerous precedent for how countries deal with genocides long after they occur. Surely, Groening is no longer a threat to society. While it is understandable that many see his trial as justice running its course, perhaps what Germany needs is a strong message against those who try to diminish the terrors of the Holocaust, not the few dying men that played a small role in it.

The precedent has already been set, however, and the counts already charged. Naturally, it is not the job of any justice system to forgive transgressions against an individual. But it is within the court’s discretion to show mercy. The German Federal Court of Justice decided in 2006 not to give an “age discount”, or shortened sentence for elderly defendants. However, prison conditions are not conducive to those with serious medical issues, and at 93 it’s likely that Groening would need special attention of some kind. The court has the ability to sentence him for a period of time that would appease the co-plaintiffs who seek prison time and also implement that sentence in a way that would place him in a facility to care for him in his last years.

Though Groening is the same man that witnessed gas chambers and collected belongings of people he knew would never leave Auschwitz, he is also a man who has lived for six decades with heavy guilt. Groening’s case is particularly unique because very few Nazis have spoken to the public about their role in the Holocaust. Before he spoke in court, Groening admitted his involvement for a 2005 BBC documentary series. His confession surely isn’t enough to clear him of all guilt, and given Demjanjuk’s conviction with much less evidence, the court is likely to convict Groening for his involvement in Auschwitz. But perhaps the most meaningful thing he has done in his life is confess what he witnessed and confirm the realities of the Holocaust to those who seek to deny it. In Groening’s own words:

“I see it as my task, now at my age, to face up to these things that I experienced and to oppose the Holocaust deniers who claim that Auschwitz never happened, and that’s why I’m here today. Because I want to tell those deniers I have seen the crematoria. I have seen the burning pits. And I want you to believe me that these atrocities happened. I was there.”