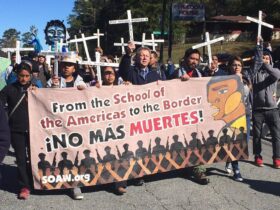 If President Putin signs it into law, a new piece of Russian legislation will soon relax the punishment for domestic violence. The measure has been widely denounced in Western media across the political spectrum, but within Russia itself, the argument gets hazy. Though the law faces significant opposition, it also has the support of many politicians and even some women’s rights activists.

Regardless of whether it is enacted, the law will have limited impact on domestic violence, gender inequality and family relations in Russia. These issues permeate Russian society on all levels – cultural, political, religious – and legal measures can only do so much. Still, this is a step backwards. On the brighter side, the dialogue surrounding the new legislation sheds light on the current state of gender and family relations in Russia. Debates over domestic violence expose deeper injustices that would take years to rectify. Unfortunately, in today’s Russia, women’s rights are being dismantled, not strengthened.

When I spoke to my mother about the measure, she was upset but not surprised. “Women and children in Russia have no more rights,” she said. Growing up in the USSR and post-Soviet Russia, she expects very little from the authorities. The system is not just corrupt but also cruel, so people are scared to involve the police in their lives. For the same reason, she wasn’t at all shocked that 385 of 387 members of the Duma had voted for the measure, even the mere 12% who are women. All of those seats are bought and sold, she explained. The only people who actually participate in Russian politics do it for the perks: money and connections. The idea of going into government to enact positive change is an idea that has yet to reach Russia.

No lasting damage, no problem

In January, the Russian parliament—the Duma—voted to decriminalize non-recurring domestic violence that causes no ‘lasting damage.’ This decision reverses a previous trend towards harsher policies. In 2016, the Duma had decriminalized poboi (battery without lasting harm, the least violent of assault) but kept a maximum two-year sentence for domestic violence. previously, there had been no legal distinction for domestic violence within the general category of violent crime. If this new law passes, punishment for a first offense of poboi will be softened to a 30,000 rouble fine (around US$500), community service or a 15-day detention. If incidents by the same perpetrator occur within one year, however, those will still be treated as criminal cases.

“Traditional, or rather archaic, values have become popular again.”

More significantly, all domestic violence cases will now be prosecuted in the private realm. This means that the responsibility for gathering evidence and bringing forward a case will fall on the victim. Before, law enforcement bodies could initiate persecution of a crime. The argument for the new law, though, claims that violence within the family is a private matter and should be handled accordingly. In practice this will make it even more difficult for a woman to escape a violent situation and to get her abuser behind bars. In addition to the more arduous process, the emotional stress for a woman to gather evidence and bring forward a case against a family member will be a powerful deterrent. This part of the legislation more than any other will keep victims from finding safety and achieving justice.

The circles of hell: gender and politics in Russia

The bureaucratic environment in Russia already makes it infamously difficult to bring forward domestic violence cases. “It’s the circles of hell, it goes on and on,” said one woman who tried and failed to bring her prosecutor to justice. Another domestic violence victim, Marina called the police when her husband threw her out of a second-floor balcony, putting her in a wheelchair with multiple serious injuries. Instead of arresting the husband, they told her, “It is your family matter; you quarrel and then you reconcile.”

Accurate statistics are hard to obtain, but according to official statistics, around 40% of violent crime in Russia occurs within the family, and 80% of violence against Russian women comes from a husband or partner. The actual figures are even higher, given that the statistics came from the Russian government and are most likely underreported. And the problem is growing: according to the Anna Centre for the Prevention of Violence, there were 20% more reported assaults on women and children in 2015 than in 2010. But fewer than 30% of women who call the Anna Centre’s abuse hotline report their case to the authorities. And of those who did, 80% remained unsatisfied with the response.

If he beats you, it means he loves you: a sexist tradition

This phenomenon reflects a long-standing cultural tradition revived in today’s reactionary Russia. An old proverb goes, “If he beats you, it means he loves you.” The saying has survived for centuries, tracing back to a household manual called Domostroy, which first appeared in the 16th century during the reign of Ivan the Terrible. Secular but permeated with Christian Orthodox morality, the text presents physical punishment for women and children as a “mere blessing” that prevents “death of the soul.” In addition to teaching new wives on how to manage their servants and distill their vodka, Domostroy instructs young Russian women to obey their husbands and know their place. When my mother married, my grandmother gave her a copy.

Though the book is dated and few today take its advice seriously, this attitude towards women is alive and well in modern Russian society, guarded by the Orthodox Church. Since the fall of the Soviet Union, the Church holds huge social and political influence in Russia. It supports the new law as a means to keep the government from interfering with a husband’s or parent’s so-called right to administer discipline; according to scripture and tradition, “the reasonable and loving use of physical punishment [is]an essential part of the rights given to parents by God himself.”

According to gender rights activist Alyona Popova, “traditional, or rather archaic, values have become popular again.” Activists and high-profile celebrities have been increasingly speaking out against domestic violence, but the response is often that the women “were asking for it with frivolous behavior,” or “knew who they were marrying and should have known better.’” Such attitudes reflect a culture of victim-blaming, in which both men and women often see crimes against women, including domestic violence and sexual assault, as something the woman invites and therefore can prevent.

“The wife, with bruises all over her face, shouts at the officers, saying it is none of their – or my – business.”

Part of this return to traditionalism can be understood as a reaction to the communist state’s overbearing control of all aspects of citizens’ lives. Russians today are understandably wary of laws that grant the corrupt state access to their private sphere. People prefer to sort out their affairs themselves, since calling the police usually just means inviting more trouble into their homes, a sad reality carried over from the Soviet era. The rationale for the new legislation clearly reflects this fear. ‘The family is a delicate environment where people should sort things out themselves,’ argued Maria Mamikonyan, head of the All-Russian Parents Resistance movement, a group that lobbied for decriminalization.

A long road ahead

Though the new legislation will certainly not bode well for women’s rights in Russia, the issue has been oversimplified in Western media to two clear-cut and opposing sides: the corrupt and repressive Russian government granting free reign to abusers on one side, activists fighting for women’s rights on the other. In fact, not all Russian women oppose the legislation, not even in the activist community. Marina, the domestic abuse victim quoted above, agreed that ‘the law must distinguish between slaps and beatings,’ with only more violent cases like hers treated as criminal offenses. Others have brought up the possibility that with a less harsh punishment in place for minor offenses, women will be more willing to report violence without fear that their partner will end up in jail.

This is not a very strong argument, but the reluctance of some Russian women to punish their partners and abusers reflects a deeply ingrained cultural acceptance of violence in the family. In a Moscow Times article, Daria Litvinova collected testimonies about domestic violence from NGO workers and ordinary Russian citizens. According to Anna Centre’s Larisa Ponarina, relatives often disown women who report domestic violence because “keeping the family together and standing behind the father of her children is more important.” Even more appalling, the following is an account from an anonymous Moscow resident who often hears the neighbors fighting and calls the police: “the wife, with bruises all over her face, shouts at the officers, saying it is none of their – or my – business. Once they tried to arrest the husband, and she went in fists first.”

As we can see, while strong legislation is key, domestic violence in Russia begins and ends with cultural attitudes. As long as the mainstream mentality accepts a threshold for permissible domestic violence, women will continue to suffer everyday abuse. It wouldn’t matter much if the official punishment for domestic violence remained two years of jail time; police and lawyers still often ignore and refuse to prosecute the few cases that women attempt to bring forward. In a society where identifying as a feminist is a radical admission, women will continue to “bear the violence silently, hide bruisings from public and blame themselves.” In a country where domestic violence does not exist legally or in the minds of most people, it will remain a sad fact of everyday life for thousands of women.