In early September, multiple Chinese-national professors researching Australian Studies were stripped of their Australian visas on the grounds of security issues. The incident comes on the heels of reports that the Australian Security Intelligence Organisation (ASIO) raided the residences of Chinese journalists and harassed them. The supposedly unwarranted harassment has not been one-sided, however. Australia has recently succumbed to invasive cyber-attacks that have been attributed to Chinese actors.

For now, China has committed the most recent affront. As part of a disinformation campaign, an official Chinese account released a doctored image of an Australian soldier holding a knife to an Afghan child’s throat, causing outcry throughout Australia.

While tensions are now revealing themselves in a very conspicuous manner, China has wielded some economic influence in Australia for many years.  For example, Chinese demand for Australian commodities is considered to be one of the reasons Australia never succumbed to the Great Financial Crisis. As Australia became important to the Chinese supply chain, large political donations began to flow into campaign coffers from ethnic Chinese linked to the Chinese Communist Party.  These attempts to influence Australian policy on China initiated the growing diplomatic tensions between the nations.

The diplomatic crisis is representative of an increasingly hawkish view on China that has arisen in Australia and driven recent foreign policy in Canberra, as a result of Chinese attempts to influence elections. As tensions heat up, politicians in Canberra need to consider the potential economic retaliation that China may exert over their tight-knit trading relationship.

Historically, Australia has been able to maintain peace with relative ease due to its natural geography. Being an island removes the possibility of border skirmishes. However, in July, Prime Minister Scott Morison declared, “Our region is in the midst of the most consequential strategic realignment since the Second World War.” The militarization of the Indo-Pacific region in the past five years has increased faster than Australia has expected. While Australia’s and China’s defense spending as a percentage of GDP have both hovered around 2% for the past 20 years, China’s explosive GDP growth has dramatically increased the nominal value of military expenditure.

While Canberra has wanted to strengthen Australia’s security vis-a-vis China, it may quickly come at a cost to its exports. China currently accounts for about 30% of Australian exports, which totals 6.7% of Australia’s GDP.

In addition to security issues, Canberra is highly suspicious of China’s role in the coronavirus pandemic. A recent tariff of 80% placed by China on the Australian barley industry is expected to cost about A$500 million per annum. Many have speculated that the tariff is a retaliation against calls for an independent investigation into the origins and handling of the outbreak in China. Beijing claims the tariff is in response to Australian practices that have caused material injury to the domestic Chinese barley firm. Complaints about such practices include government subsidies and “dumping,” in which a product is sold for cheaper overseas than domestically to steal market share.

Given rising tensions, Canberra has received pushback concerning Australia’s trade dependence on China. In defending Australian efforts, Agricultural Minister David Littleproud referenced trade agreements with more democratic nations such as Japan, Peru, South Korea, Indonesia, and the United States. He asserted, “That’s diversification, so with all due respect our track record looks pretty good.” Littleproud went on to justify not offering concessions by stating that it is necessary in order to stand up for Australia’s values.

Littleproud’s comments, however, do not hold up when compared to trade statistics. For example, since 2010, exports to China have nearly doubled to just over $100 Billion. For comparison, exports to Australia’s second-largest market, Japan, have remained flat at $40 billion.

A key factor not referenced by Littleproud that lends greater credence to his support of increasing security against China is the nature of the exports. Rather than a diversified set of exports that include industries with large internal supply chains, such as manufactured goods, Australia’s exports are highly concentrated in the commodities sector. In fact, iron ore makes up about 60% of exports to China. While increases to Australian security and resulting tensions with China may expose Australia’s economic vulnerability on a GDP basis, the effects of changing Chinese supply lines would hurt Australia in highly concentrated sectors, with a lower likelihood of spillover effects into the broader economy.

While the rhetoric of faltering economic relations may seem scary, Australia should prioritize security over trade. China’s economy is an ever-hungry economic engine that needs raw resources to supply its manufacturing sector. Shifting the supply chains of about US$100 billion worth of commodities would take preparation and time, meaning that China can’t immediately react to Australian actions in economic terms.

Furthermore, the damage to Australia would concentrate in a few sectors. The contrast between the two nation’s military spending, coupled with aggressive Chinese actions in the Indo-Pacific region, should be a more pressing strategic focus for Australians. The short-run economic cost of increased tensions with China is a price Australians will have to pay in exchange for both greater physical and cyber security.

Jake Wasserstein is a senior double majoring in International Relations Global Business and Spanish. Hailing from Middlebury, Connecticut, Jake first became interested in International Relations through traveling and experiencing other cultures. His area of interest lies in the intersection of business and global business. Jake has experience researching at the Institute of European Studies in Brussels, Belgium and EA Capital Markets in New York. 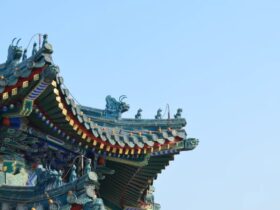 U.S.-China Relations and Tensions at COP 27