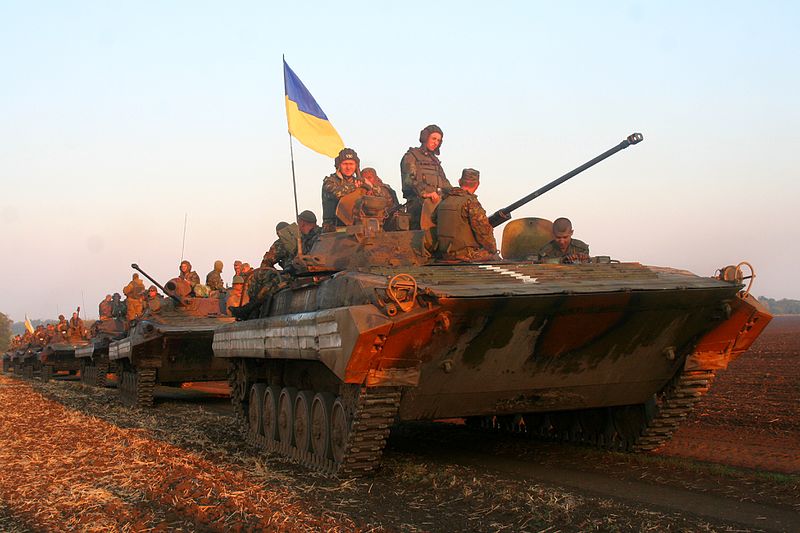 Looking at 5 Years of War in Ukraine

Since 2011, Libya has been a failed state; the country has no single functioning government that can claim control over the entire territory, and, despite increasing instability, the international community has done little to help salvage the dire political situation. As a result of this lack of intervention, Libya has regressed further into anarchy, allowing the Islamic State (IS) to spread its branches outside of Syria and Iraq and form a satellite group in Libya—placing the radical Islamist organization dangerously close to Europe.

When the country’s longtime dictator, Muammar Gaddafi, was ousted and later murdered in the 2011 Libyan civil war, the international community was not immediately concerned; in line with the common initial reaction to the Arab Uprisings, many trumpeted the newfound potential for democracy and human rights for which Libya could now strive.

But Libya was a divided country long before Gaddafi’s reign. Since Italian occupation in the early 20th century, the territory making up today’s Libyan state has been split into three regions: the more cosmopolitan region of Tripolitania in the northwest, the largely unpopulated desert region of Fezzan in the southwest, and the oil- and natural gas-heavy region of Cyrenaica in the east.  Even after World War II, when the regions were politically united, the religious, ethnic, and tribal differences between the peoples of the three regions have kept Libyans from developing a sense of nationalism. Instead, intra-state regionalism divides the people ideologically. Once the authoritarian government under Gaddafi fell apart in 2011 with no other unifying force present to retain order, the three Libyan regions fell into chaos.

There have been attempts to install a democratically elected government. After the civil war in 2011, the popular National Forces Alliance (NFA) political party – promoting a secular, moderate pro-business platform – won the 2012 democratic elections with 98% of the vote. But when it came to actually forming a government, the NFA could not organize itself as well as the less popular Islamist political party, the Muslim Brotherhood’s Justice and Construction party, which enjoyed alliances with many of the free-roaming militia groups. Libya quickly fell into a cycle of continuous revolution perpetuated by these Islamist-leaning militias, which prevented the official formation of a government each time the Islamist party lost the democratic elections. Without a uniting government, the divisions between the three regions have widened even further, and the militia groups roam freely without a policing force to fill the political void.

Currently, there does exist a democratically elected Libyan Parliament that governs Benghazi (the de facto capital of Libya since January of 2014), and is supported, at least in theory, by the UN, the US, and the EU. However, this Benghazi government has had to retreat out of Libya’s other major cities: the General National Congress (GNC), which has occupied the former de jure capital of Tripoli since 2014 and is controlled by the Muslim Brotherhood’s Justice and Construction party and their militia allies, removed the Parliament from Tripoli in 2014. Meanwhile, smaller militias, tribal organizations and other groups roam the rest of the anarchic state, especially in Cyrenaica, where very little authority structure exists. Little has been done to assist this Western-backed government and its military in Benghazi as they have tried to regain control of Tripoli, and little seems to be in place to make future policy changes.

This lack of interest and support owes to the fact that Libya has rarely been a primary strategic interest for international powers. Though oil sales drove the Libyan economy in the late 20th century and into the 2000’s, few developed countries were willing to deal with Gaddafi’s uncooperative economic policies. Then, after the 2011 civil war, the economy collapsed entirely.

It didn’t help that, following the 2011 uprisings across the region, the US preoccupied itself with shaping Egyptian politics; Egypt was considered more of a national interest largely because of longstanding US-Egyptian relations and Egypt’s relatively favorable relationship with Israel. In Libya under Gaddafi, no alliances with the US were ever made. No other state would come to the rescue either, because Gaddafi’s Libya had always remained separate from North African, Arab and oil state politics. This isolation was largely due to Gaddafi’s rampant paranoia, fearing that other Arab governments would try to overthrow him and subsequently refusing to participate regional politics.

As a result, Libya, right next door to Egypt, never garnered the global attention it perhaps required during and after the 2011 uprising and civil war. It would take the assassination of the American ambassador in Benghazi in 2012 to force the world to take seriously the worsening political situation. But, as has occurred in many of the conflicts throughout the MENA region, failing states are often left to fail.

The devolution of Libya has become clear with the appearance of a branch of the IS in Libyan cities. On February 12, 2015, a group of radical Islamists claiming ties to the IS beheaded 21 Coptic Christian Egyptians on a beach, a bloody massacre that drew mass attention from around the world and caused Egypt to begin launching airstrikes on Libyan militia groups. Since then, however, the IS branch has marched through the broken country, gained territory and eventually reached the coastal city of Sirte.

IS is now officially on the Mediterranean. The EU, which on the whole has remained comparatively inactive in the fight against IS in the deeper MENA region, is now forced to pay more attention to the conflicts.

The sudden cause for concern is the proximity of this new IS cell to Europe. While an attack on EU-owned oilrigs or trade centers in Libya would indeed elevate IS’ acts of terror against America and Europe from beheadings to the destruction of property, the possibility of IS moving into European territory is even more dangerous. The Libyan coast is only about 400 miles from the southern shores of Sicily; Italy has already been experiencing for some years now a problematically large influx of immigrants from North Africa. Many immigrants board ships from Libyan or Tunisian shores and attempt to cross the sea with the goal of reaching Italian soil and a European way of life. While many of these immigrants sadly do not survive the dangerous crossing, many others do arrive safely on European shores. Italian government- and EU-funded ocean policing programs have attempted to stem the tide of immigrants into Italy in the past, as the Italian state is struggling to support such a massive influx of people.

Indeed, the IS video of the Egyptian Christian beheadings stated that IS “will conquer Rome.” Many Italians have reacted to the threat with humor, but the European community does have serious cause for concern—especially after the Charlie Hebdo shootings in Paris back in January. And while al-Qaeda alone is to blame for the Charlie Hebdo shootings, it is clear that terrorist attacks in major European cities are certainly possible. As of now, the EU anti-immigration programs in Italy are simply not advanced enough to process every immigrant arriving by boat from North Africa to ensure that there are no IS militants hidden among the crowds.

What is the potential solution to this threat, then? Better immigration security into Italy by sea is certainly necessary, but it is only a short-term solution for a long-term problem. IS, especially as a political ideology, doesn’t look to be disappearing anytime soon. There instead needs to be a fix for Libya itself: the international community needs to engage in salvaging the country’s government and democratic potential.

To accomplish this, the “Western-backed” Benghazi parliament needs to be supported and allowed to eventually create a functioning government that can unite and represent the three Libyan regions and their various ethnic groups. Egyptian President Abdel Fattah al-Sisi has called for a UN coalition to intervene in Libya by lifting the arms embargo against the country and arming the Benghazi government and its military so that they can fight back against the radical Islamist militias and take back lost territory; the GNC itself has. The coalition would also attempt to disarm the radical militias and keep better tabs on weapons in Libyan territory.

For once, I agree with President al-Sisi’s foreign policy. For too long the international community has allowed Libya to descend into violence, disarray and anarchy. No effective initiative has been taken to fix the problem, despite many Western governments’ insistence that diplomacy – and not arming the Benghazi government – is the only way to mitigate the political vacuum in Libya. But diplomacy has not worked with the small Islamist militias nor, for that matter, the Islamic State: their path towards continued violence is so far inexorable, with Europe now easily within reach.

In addition, there are simply too many separate radical militia groups for the Benghazi government to even dream of working towards a common solution. If the UN can show solidarity towards the government it has professed to support, then lifting the arms embargo to Libya and carefully managing an arms transfer could be the only way to salvage Libyan politics. Of course, heavy monitoring and the assistance of UN forces on the ground (potentially volunteered from the EU governments that cannot afford an IS terrorist attack on their own soil) will be essential to ensure the security of the situation. However, simply continuing to promote “diplomacy” – which so far has meant a complete lack of action on the part of the UN, the US and the EU – will not help Libya and will not ensure the security of Europe.