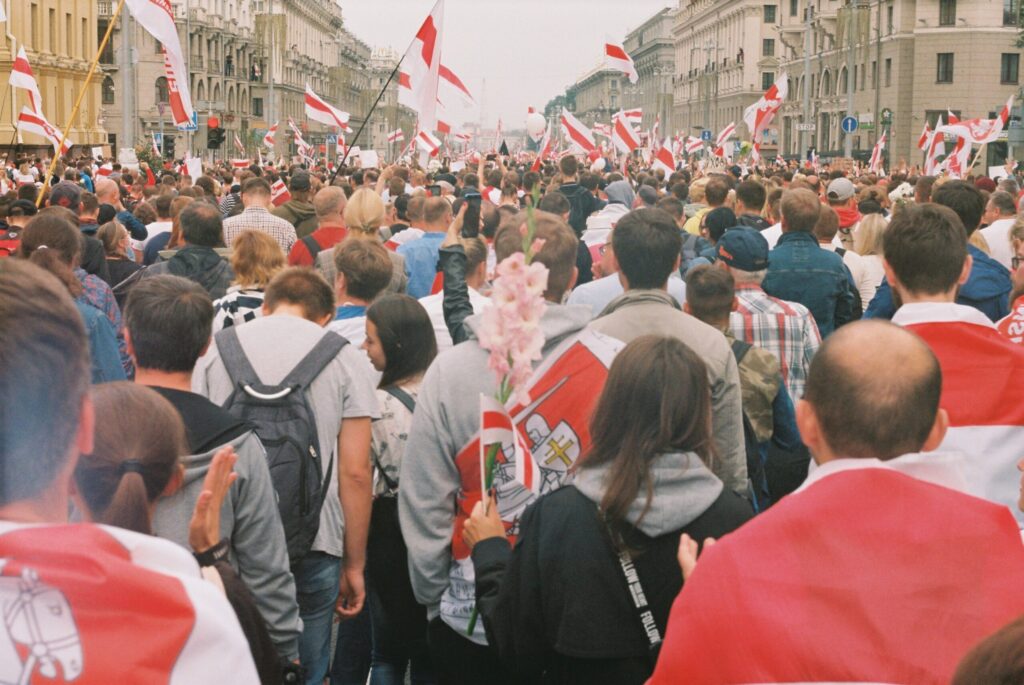 The Reign of “Europe’s Last Dictator” May Be Ending

In the new agreement, Serbia and Kosovo agree on the establishment of a single market, guarantee a free flow of people, services and capital, and create railway and highway links. Although Serbia and Kosovo have previously had many negotiations towards the betterment of bilateral relationships, the improvements were minimal. Tensions between Serbia and Kosovo actually increased in 2018 when Kosovo imposed a 100% tariff on goods imported from Serbia. Considering that Kosovo used to be a Serbian province and its 2008 independence was never recognized by Serbia, the sudden achievement of a deal in 2020 was unexpected.

What was even more surprising was a Facebook post by Russian Foreign Ministry spokesperson, Maria Zakharova. She posted a photo of President Vucic and Trump at the Oval Office and another photo featuring Sharon Stone’s rather provocative leg-crossing scene from the American thriller “Basic Instinct.” Commenting on the two photos, Zakharova implied that instead of sitting as if he was being interrogated by Trump, Vucic should present himself more confidently.

Zakharova’s reckless remark immediately sparked wide-spread vexation, and Vucic himself commented on the situation, saying that “the primitivism and vulgarity she showed speaks about herself, but also about those who have given her the job.” Although Russian President Vladimir Putin and Zakharova herself later apologized for this misconduct, The White House meeting reveals an underlying shift in Serbia and Russia’s historically close relationship. Considering the European Union has always tried to normalize the relationship between Serbia and Kosovo, the agreement will undoubtedly improve Serbia’s relationship with the EU. What is more, the Serbia-Kosovo agreement contains political items that may indicate Serbia’s effort to distance itself from Russia. This leaves the future of the Serbian-Russian alliance uncertain and makes clear Serbia’s intention to strengthen its relationship with the EU.

Serbia and Russia are both Slavic and Orthodox countries that have traditionally always been allies with each other. Ties between the two countries strengthened in 2008 when Kosovo, an autonomous Serbian province with an ethnic Albanian majority, declared its intent to leave Yugoslavia (which includes the current-day Serbia, Croatia, Montenegro, Slovenia, Bosnia and Herzegovina, and Macedonia). To fight against Western pressure to internationally recognize Kosovo as an independent country, Serbia sought help from its Slavic brother, Russia. Since then, Russia has supported Serbia’s sovereignty and territorial integrity regarding Kosovo, refusing to recognize Kosovo’s independence. The two countries have also formed close economic partnerships and collaborated militarily. Russia’s investment in the Serbian economy totaled up to $4 billion in 2019, and it is expected to invest another $500 million over the next two years, while also supplying the country with natural gas.

Serbia is also the only Western Balkan country that purchases Russian weaponry. In 2016, Serbia signed an agreement on the purchase of the Buk air defense complex for its military. When Aleksandar Vucic assumed the Presidency in 2017, news media in both countries eulogized the friendship between Serbia and Russia. Putin is the most popular foreign leader in Serbia due to his understanding of Serbia’s national culture and interests.

Nevertheless, the two countries do not always have the same goals, and Serbia cannot completely side with Russia due to geographical and economic reasons. Serbia’s geographical location illustrates it’s strategic position: caught in between two rival powers in Europe, with the European Union in the West and Russia in the East. Russia is able to support Serbia’s stance on Kosovo and provide military assistance, while the EU brings more economic benefits to Serbia. A report from the EU delegation to Serbia mentions that the EU has long been a major trading partner with Serbia, receiving, on average, 67% of Serbia’s total exports. Meanwhile, around 60% of Serbia’s total imports of goods come from the EU member countries every year, showing deep economic ties between Serbia and the EU.

Besides this, almost all of Serbia’s neighboring countries (Hungary, Romania, Bulgaria, Macedonia, Croatia) are EU members, leaving Serbia and Bosnia and Herzegovina as the only two countries that support Russia in the Western Balkans. As Vucic stated during an interview this March, Serbia is always on a path towards greater collaboration with the EU. Serbia has demonstrated this commitment by backing the EU denouncement of the Presidential election in Belarus — a Russian ally — and suspending the 2020 “Slavic brotherhood” military drills with Belarus and Russia due to “great and undeserved pressure from the European Union.” The previously mentioned Serbia-Kosovo agreement also indicates that Serbia will diversify its energy sector, where Russia has an entrenched role. Interpreting the meaning of this economic diversification, the U.S. envoy to Belgrade said it “means [Serbia’s] distance from Russia.”

Though Serbia has displayed an interest in joining the EU, it is less likely that a formal offer will take place any time soon due to the presence of unresolved problems. The first and most crucial barrier towards EU entry lies in the recognition of Kosovo as an independent country. Although Serbia and Kosovo were able to normalize economic relations, Vucic has made it clear that Serbia will reject EU membership if it means recognizing Kosovo’s independence and letting it become a member of the UN. Speaking on this issue in a press conference, Vucic said: “It is clear what our answer will be. If you want a direct answer, it is no.” Moreover, Vucic claimed that most Serbians prefer to keep the Serbian-Kosovo relationship as it is. This is mainly a result of Western policies in Serbia in the 1990s, such as NATO’s illegitimate bombings of Yugoslavia in 1999 during the Kosovo War, which resulted in the death of around 1500 people. This unhealed wound makes it even harder for Serbia and Kosovo to reach a final compromise.

Aside from the aforementioned grudges against Kosovo, Serbia’s increasing connections with Russia, China, and the United States also worry the EU. The Serbia 2020 Report drafted by the European Commission mentioned that “Serbia continued to develop intense relations and strategic partnerships with a number of countries worldwide, including Russia, China, and the U.S. Serbia… needs to progressively align its foreign and security policy with that of the European Union in the period up to accession.” These relationships include having frequent high-level meetings and military cooperation with Russia, increasing cooperation with China, and supporting the United States by moving the Serbian Embassy in Israel to Jerusalem. By pointing out these issues, the EU implies that it hopes Serbia will keep its distance from Russia, China, and even the United States as it seeks EU membership. However, the EU cannot expect this effort to happen anytime soon, because Vucic openly claims that Serbia is not planning to sacrifice its current relationship with these countries. In his address at the 74th Session of the General Assembly of the UN this September, Vucic said: “…Serbia chooses the independent foreign policy, [and]independent decision-making as its path towards the future. And that is why we don’t hide [it]anywhere, and not even in this hall, but we praise good and friendly relations we have with the People’s Republic of China, Russian Federation, and wish [for]better and better relations with the USA. because our job is to take care of our people, we do not care what someone else in the world might tell us.” The statement is sufficient to manifest Vucic’s refusal to prioritize the EU’s demands by weakening ties with Russia, China, and the United States.

Another obstacle to Serbia’s EU accession is that Serbia doubts the EU’s ability to support European countries in times of crisis. This was especially evident after the EU’s decision to ban the export of essential medical equipment to countries that are not EU members during the coronavirus pandemic. Criticizing European solidarity as nothing but “a fairy tale on paper,” Vucic turned to Russia and China and was able to receive immediate medical and economic aid. In response, the EU — fearing Russia and China’s increasing influence in Europe — provided 93 million euro in economic aid a few days later.

Vucic claims that Serbia intends to maintain an independent foreign policy and is not trying to please either the EU or Russia. This is demonstrated by the fact that Serbia does not always side with Russia, often opposing its Slavic brother on a series of issues, as well as the fact that Serbia has not expressed much enthusiasm about joining the European Union, especially after the EU’s initial reluctance to help Serbia during the pandemic. For now, it seems Serbia is committed to maintaining a neutral stance and gaining support from both the EU and Russia while seeking to strengthen other potential partnerships outside Europe, namely with China and the United States.

Yet, Serbia will remain a prospective candidate for EU membership, despite Vucic’s recent criticism of the alliance and the EU’s hesitation to expand its ranks. Given that the EU’s previous expansion brought in Eastern European countries with issues of corruption and economic troubles, Serbia will need to demonstrate greater political and economic stability in order to earn an invitation. Furthermore, France, one of the EU’s key leaders, is especially uncertain about welcoming new members, believing the alliance should focus on achieving greater consensus between the existing members. Nevertheless, it is clear that, despite Vucic’s claims of an independent foreign policy, Serbia seems to be leaning towards the EU and shifting away from Russia. Though Serbia will likely continue to play both sides for now, it seems its end goal lies with the EU.

Xiao Alicia Liu is a freshman currently majoring in Communication and minoring in International Relations. Alicia hails from China and attended high school in the United States, where she took French as her third language. At USC, Alicia is a staff writer at Daily Trojan and a member of the Trojan Debate Team. Her areas of interest include foreign policy, intercultural relations, and international organizations. She also hopes to combine her academic interests by studying media impacts on a global scale.
liualici@usc.edu