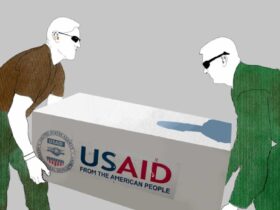 Under Biden, the United States Needs a New Approach to Foreign Aid

China’s largest e-commerce company, Alibaba, is set to make history in the coming months. Founded in 1999, Alibaba has the potential to set the largest initial public offering (IPO) in the US for a Chinese company and even exceed Facebook’s initial valuation in 2012.

While Alibaba has declined to comment on why it moved its IPO from Hong Kong to New York City, its decision is largely based on a disagreement between company executives and the Hong Kong Securities and Futures Commission. Unlike Hong Kong’s stock exchanges, the NYSE and the NASDAQ do not maintain a one-share per one-vote standard, allowing Alibaba’s key partners to maintain control over its board of directors.

Holding its IPO in the United States could also facilitate future acquisitions of American companies. Its recent investments in the Silicon Valley start-ups Tango and AutoNavi indicate that Alibaba is seeking market expansion at the international level. More than just a middleman between sellers and buyers, Alibaba allows its customers to pay bills, buy insurance, and even take out loans. Its wide range of services and competitive pricing structure are enticing to both consumers and venders. Moreover, Alibaba’s capital is substantial. In the past fiscal year, its estimated sales exceed $420 billion, which dwarfs the combined revenue of Amazon and eBay. Further, it boasts 300 million customers across China – a number that will surely grow in accordance with increased Internet penetration.

The big question that remains is whether Alibaba is capable of competing with established Western brands in the global e-commerce marketplace. Jack Ma, Alibaba’s founder and former CEO, responded to doubts of Alibaba’s competitiveness: “Ebay is a shark in the ocean. We are a crocodile in the Yangtze River. If we fight in the ocean, we will lose. But if we fight in the river, we will win.” Ma’s tempered confidence is justified. Although Alibaba has enjoyed tremendous success in the People’s Republic of China, it may not enjoy viability in the global marketplace. Alibaba’s prospects of successful market penetration are poor, particularly in the United States where the market is already saturated with established firms, such as Amazon and Zappos. Alibaba’s micro-lending, insurance market, and investment services, however, could prove highly successful in several Latin American and African economies where such service industries are severely underdeveloped.

Yet, Alibaba’s main obstacle to success may be the Chinese Communist Party. Consider yuebao, Alibaba’s financial investment service that provides a 5% return on risk-free investments. Yuebao offers a fantastic yield in China where millions of laymen deposit their hard-earned yuan into bank accounts only to see its real value depreciate from an inflationary tax. As Yuebao continues to threaten Chinese banks’ monopoly on savings, its days may be numbered before the Communist Party intervenes. Only time will tell if Alibaba can fend for itself in the vast ocean of e-commerce. Continued expansion within China and throughout the developed and developing world may prove impossible. One thing is for certain: Alibaba’s biggest threat to global development no longer lies in America, but in Beijing’s Politburo.