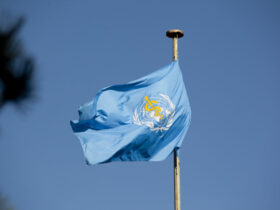 Reclaiming a Seat at the Table: The United States Rejoins the World Health Organization

TikTok and vlogs are widely popular among youth in China. In late January this year, the popularity of these mediums merged with commentary on social issues when a blogger uploaded a video of a chained woman in a small village in Feng County, Xuzhou, to “Douyin,” TikTok’s Chinese counterpart. The original intent was to document a husband raising children to advertise charity efforts in the rural area. The video immediately blew up on Chinese social media and triggered public outrage.

In the video footage, a woman appearing to be in her 40s is mumbling and shivering in an open-air hut, with a chain running from her neck to the wall. According to the blogger’s explanation, she is the mother of eight children, one of whom is responsible for taking food to her doorless shed filled with garbage. Dong, her husband, claimed that she was mentally ill and needed to be shackled.

The woman’s case became a top trending topic on China’s biggest microblogging site Weibo, especially due to suspicion that she might be a victim of human trafficking. However, the Feng County government claimed in a lackluster statement that the woman, Yang, did have a mental disorder, denying the possibility of human trafficking.

As public discussion grew and threatened to overshadow Beijing’s Winter Olympics, Chinese authorities finally acknowledged in late February that the woman, whose real name is Xiaohuamei (“Little Plum Blossom” in English), is a bought wife. Beginning in the 1990s, she was sold from Yunnan, her hometown, at least three times until the Dong family bought her for marriage. In June 1998, she officially married Dong. As Xiaohuamei’s story gradually unfolded, a deeper problem in China — bride trafficking — surfaced.

Bride trafficking is defined as the human trafficking industry of purchasing a bride as a form of property. Chinese women that are the victims of this industry are often kidnapped from poor rural areas and transported across the country to be sold for marriage. Rape and physical assaults are commonplace and bought wives are expected to have children for their so-called husbands (buyers).

The underlying cause of bride trafficking stems from China’s restrictive reproductive policy and patriarchal cultural norms. The longstanding one-child policy and entrenched historical tradition favoring boys over girls have together created a massively skewed gender ratio.

According to China’s national census in 2020, four years after the abolishment of the one-child policy, the birth ratio is around 111 males born for every 100 females. As a result, many Chinese men, especially in rural areas where gender imbalance is greater, face great difficulty finding wives. This has created a huge demand for the malicious business of bride trafficking.

Bride trafficking does not happen in China alone. In fact, cross-national trafficking is very common. According to the National Bureau of Statistics of China in 2021 and related court records, among thousands of trafficking cases involving women and children, many victims are believed to have been bought from North Korea, Myanmar, Bangladesh, Cambodia and Vietnam. It is estimated that, from 2013 to 2017, about 21,000 women from northern Myanmar were sold to just one province in China and forced into marriage.

The complexity of the issue stems from China’s thousands of years of family planning and traditional preference for boys, creating obstacles from all aspects of society to implementing real changes. According to Chinese law, the purchase of a trafficked woman carries up to three years sentence in jail — less than the jail time for purchasing illegal animals or plants, which is seven years. Moreover, many of these women face extreme violence from their traffickers and negligence from the Chinese police, making them less likely to report.

The current CCP government, nonetheless, poses the biggest obstacle to systematic change. It’s undeniable that stopgaps like public propaganda against human trafficking and stricter border control have been implemented. Nonetheless, none specifically target bride trafficking. Moreover, as the government prioritizes stability over helping victims, many cases like Xiaohuamei that might stir public outrage remain hidden.

The same principle of prioritizing stability also applies to #MeToo movements and feminism in China, as feminists’ core demand of controlling their own bodies is in conflict with China’s oppression of personal autonomy. On March 6, 2015, the Chinese police arrested five young women engaged in planning a multi-city protest to end sexual harassment in Beijing for “picking quarrels and provoking trouble.” In late 2019, an active journalist in China’s #MeToo movement named Huang Xueqin was also detained for three months for unknown reasons. By criminalizing women’s attempts to organize and fight for their rights for the sake of stability, the CCP government further reinforces patriarchy.

This endeavor is also reflected in China’s policy reform. As an authoritarian state, China regards falling birth rates as an existential crisis. China replaced its one-child policy with a two-child policy in 2016. On May 31, 2021, China announced the new three-child policy, which allows couples to have up to three children. While these changes can reduce bride trafficking to some extent, they still impose restrictions on reproductive rights.

In order for women’s rights in China to move forward, there needs to be harsher punishments for traffickers and an end to gender discrimination. Most importantly, China needs a government that prioritizes reproductive rights and gives them back to the people.

U.S.-China Relations and Tensions at COP 27