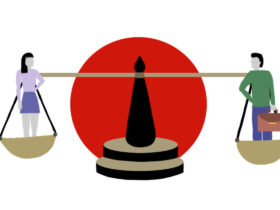 LOS ANGELES — Despite recent storms bringing intense rainfall to some parts of California, the state—along with the American Southwest—continues to experience its most dire drought conditions in decades. This is caused in no small part by the extremely low water levels of two major lakes in the Colorado River Basin: Lake Mead and Lake Powell.

Such multi-year droughts are commonplace in this area of the United States, but the compounding impact of climate change makes it difficult to imagine a future in which such conditions are sustainable. Thus, in an age where attempts to reduce water use have occurred to little avail, it is prudent to turn to other international solutions; namely, importing water from Canada.

The reason southwestern states of the United States (for the purposes of this article, California will be treated as a southwestern state, as opposed to only including its southern half) should rely on Canadian freshwater supplies is clear: locked in the country’s over 2 million lakes and rivers and 25 watersheds is 20% of the world’s freshwater and 7% of global renewable freshwater.

Of course, not all of this water is readily accessible, nor should it exist solely to solve other countries’ water availability problems. There are numerous Canadian industries that directly or indirectly benefit from the nation’s surplus of freshwater reserves; fisheries, agriculture, shipping, and manufacturing are only a few of many. Therefore, it would not be prudent for Canada to export a substantial portion of such water resources, particularly in sectors where those resources add external value.

However, this still leaves a substantial amount of untouched freshwater with which Canada has thus far been unwilling to part. The most recent data from 2012 shows that most Canadian regions use less than 10% of their available freshwater, while only a small minority of provinces—mostly concentrated in the southern region—use over 40% of their naturally-occurring water.

The American Southwest is not the only region that stands to benefit from imported water; Canada would also find value in the transaction. First California is known for its agricultural industry, a sector that requires immense amounts of freshwater to feed not only Americans but also residents of numerous other countries (it exports over $2 billion worth of agricultural products to Canada alone). The second and more obvious benefit to Canadians is profit. As freshwater becomes more scarce its value will only increase, becoming a potential cash cow for the Canadian economy.

A major roadblock hindering Canadian water exports to the United States (or any other country for that matter) lies in the country’s political and cultural attachment to the resource. While Canada technically exports vast amounts of freshwater in the form of other products, bulk transfers are virtually nonexistent. This potential export is shot down because of what Brian Giesbrecht, a senior fellow with the Frontier Center for Public Policy, calls “thinly disguised anti-Americanism.” The primary form of Canadian freshwater exports is, per Giesbrecht, agricultural products, which by their very nature possess extremely high levels of freshwater.

However, when diversions, dams, or bulk transports of water via container ship are proposed, the Canadian government has time and again prevented their enactment or outright banned such measures, denying Americans access to valuable water resources. In 1999, intense negative public reactions to reports of ongoing proposals in Ontario, Newfoundland and British Columbia to export bulk freshwater encouraged the government to temporarily halt such negotiations, eventually leading to a ban on freshwater exports from all federally-controlled water bodies.

Anti-water export sentiments have not changed, with the passage of a 2013 law preventing provinces from piping transboundary water to the United States. Although there is little recourse available in this context, aside from a complete shift in domestic sentiment, the United States can leverage free trade agreements to make inroads into the Canadian water market.

The United States-Mexico-Canada Agreement (USMCA) that replaced the North American Free Trade Agreement (NAFTA) in 2020 made significant changes to the way water is perceived by its three signatories. USMCA is a free trade agreement that governs virtually all trade between the United States, Mexico, and Canada, and replaces numerous outdated provisions of its predecessor. In the context of water, freshwater was treated as a “good” under NAFTA, meaning it was subject to interstate-dispute lawsuits, of which Canada was usually on the losing end.

One reason for this is the decentralized nature of Canadian water protection; both the federal and provincial governments have jurisdiction over natural water resources, meaning local policies were subjected to NAFTA restrictions. This caused more harm to Canadian water resource protectors and gave the United States some room to extract bulk freshwater from the nation, since all parties to the agreement usually had equal right to “goods,” including Canadian water.

Under the new trade agreement, however, water is barely mentioned; it is governed only by a side letter (an external clarifying provision of a financial contract or trade agreement which is not part of the original pact but has similar enforceability) and is otherwise governed by the USMCA only if it has commercial value. This means that the water must first be commercialized (turned into a commercial good) and then it can be converted into another form and potentially exported (one example is the purchase of groundwater and the subsequent bottling and export of that water).

While these new rules prevent American companies from utilizing the Investor-State Dispute Settlement system (which allows them to sue countries for punitive damages in international tribunals for breaching most investment treaties such as NAFTA), there are other ways in which the American government or private companies can circumvent Canadian inhibitions about water exports.

The most plausible mechanism is simply taking advantage of the weak environmental protections afforded by the agreement. Under NAFTA, Canada could cite environmental concerns to fend off legal attacks against its water protections, but such reasons no longer provide a strong defense.

The second possibility is simpler in theory, but has little possibility of realistically being accomplished: private companies would obtain Canadian freshwater resources, commodify and commercialize them, and then sell them to American companies or states.

But it remains to be seen if this method can be successful, especially considering the legal intricacies and lack of precedent involved. However, if companies can properly navigate the new circumstances, water should be able to flow relatively easily across the U.S.-Canada border.

Whatever the circumstances and potential avenues available to import water from Canada, the United States needs to take quick action—whether that be in the form of negotiations or otherwise—to access Canadian freshwater. States such as California are turning to other solutions such as ocean desalination, but these solutions are much too slow to combat what is becoming an increasingly dire situation in the American Southwest.

And if nobody acts soon, there won’t be much of a region left to save.