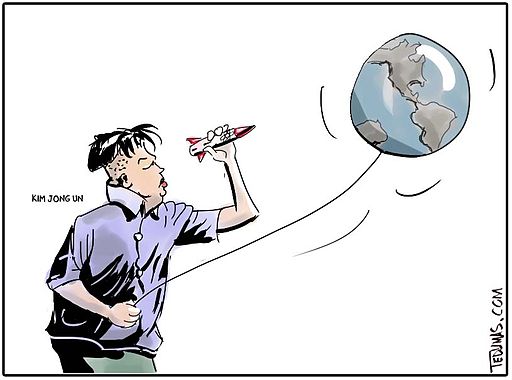 No SpaghettiO’s for you, Kim Jong Un

It’s a blustery October weekend in Munich, Germany. The leaves are changing, the wind is blowing, and locals hurry through the city without the typical throngs of tourists. The iconic Hofbräuhaus Beer Hall’s 5,000 seat establishment has half of its tables closed for social distancing. Others sit empty due to the national travel bans. Only a few weeks prior, Munich should have been bustling with millions of tourists for Oktoberfest. But coronavirus put an end to it all. Over the past few months, Europe has been struggling to strike a balance of preserving culture and staving off huge waves of infection. So far, they have not been successful with either task. With no end in sight for the pandemic, will Europe’s cultural traditions become another casualty of this virus?

Carnevale di Venezia, or Carnival, as we know it in English, was the first cultural event to be affected by the pandemic. The celebration, replete with extravagant masks and outfits, typically runs until the first day of Lent in February. This year it was canceled halfway through because of the first coronavirus deaths in Italy. At that point, the virus was still a new phenomenon, and no one knew the implications or death rates. Carnival’s cancellation turned out to be beneficial, as it prevented a potential super spreader event from ravaging the country.

Carnival was the first event on the chopping block, and dozens of other events followed. The Running of the Bulls in Pamplona, Spain, the Lavender Festival in Valensole, France, and La Tomatina near Valencia, Spain were all sidelined in the interest of public health. Remarkably, the one event that remained somewhat unscathed was the iconic Tour de France cycling race. With every event canceled, more and more tourist money was lost too. EU industry chief Thierry Breton estimated that approximately 1 billion euros (or about $1.1 billion USD) were being lost monthly since January 2020 from the lack of international tourism.

Oktoberfest is the crowning event for Munich. Millions of tourists from all over the world flock to the Bavarian city to drink beer, eat pretzels, and celebrate German culture. Economically, Oktoberfest is extremely important to the city’s economy, especially the hospitality sector. In 2019, tourists spent $1.3 billion on food, beer, lederhosen, and accommodation. They drank an impressive 1.9 million gallons of beer too. Hence, the pandemic’s derailment of cultural celebrations has collaterally damaged expected incomes for locals. According to the European Union Tourism Trends Report, “Tourism contributes 10% to EU GDP and creates jobs for 26 million people.” A large contributor to tourism is visiting Americans. With most Americans having been banned from traveling to Europe since March, this has negatively impacted the European economy dramatically. This summer alone, Italy lost an estimated $2.1 billion in revenue as a result of the ban on American travelers. Despite the huge financial losses in the tourism sector, most Italians were against having American tourists back this summer. A total of 61% of Italians surveyed said they did not want Americans coming even if there was a mandatory two-week quarantine.

In July 2020, I talked to a young painter in Cinque Terre, Italy who sells his watercolor landscape paintings as vacation mementos. He bemoaned that “about 70 percent of the summer income in Cinque Terre comes from American tourists. The locals are hurting without them.” His perch overlooking the village of Manarola had a great view of an almost empty town. The locals were out and about with only a few dozen European tourists dotting the landscape.

But will tourism bounce back in the years to come? Some Americans are living paycheck-to-paycheck and no longer have the means for an expensive European escapade. Other households have lost a second-income as one parent stays home with school-age children. These changes are in no way confined to American borders and are faced by other countries too. And when the opportunity to travel internationally presents itself, will Americans be willing to take the risk? Some airlines have already started filling the middle seats again and most are mandating masks for the entire duration of the flight, which may dissuade some tourists from traveling.

This summer and winter, one question that plagues event planning is whether it is economically feasible to put on an extravagant celebration when international tourists can’t come and fund it. Locals must consider whether the educational deficits caused by not having these cultural events outweigh the monetary costs. And for some communities, culture won’t make the cut.

It’s highly likely that events in the winter and spring of 2021 will be canceled once again. Europe is currently battling its second wave which has completely upended society. Almost every European country has reverted back to some type of national lockdown or implemented heavy-handed restrictions. Christmas markets all over Central Europe have been preemptively canceled. For Carnival and St. Patrick’s Day to happen early next year, they almost certainly require the widespread administration of a vaccine beforehand. Drunken revelry and packed spaces are the antitheses of coronavirus containment.

Cultural events offer educational insight into a country’s heritage and people. It’s a way of overcoming cross-cultural barriers to create a mutual understanding between people. Locals bond with visitors, and the interactions between these groups lead to long-standing positive relationships between nations. This phenomenon of exchange between cultures is well documented in the field of diplomacy, and known as cultural diplomacy. The Institute for Cultural Diplomacy defines it as an “exchange of ideas, values, traditions and other aspects of culture or identity.” Oktoberfest, Carnival, St. Patrick’s Day, and all other events like them, fit within this definition. Cultural diplomacy is one facet of public diplomacy that produces goodwill and positive international relations over generations. For the sake of future international relations and for preservation of culture, the show must go on. How cities and countries adapt these events into pandemic-approved gatherings will determine their future.

Europe has come a long way with preserving both tangible and intangible cultural heritage, but some traditions can still slip through the cracks. I’m optimistic that Europe will be able to bounce back from these setbacks. If there’s anything that the coronavirus has shown the world, it’s that we must appreciate all aspects of life — because there is no guarantee that they’ll happen again.

When life does eventually come around to some semblance of normal, I believe that beloved cultural traditions will be the first things to spring back to life. Europeans are already itching to celebrate traditions with family, and the tourists just as eager to come back. Hopefully, Europe can save itself and its traditions before it’s too late — and not let coronavirus kill culture too.