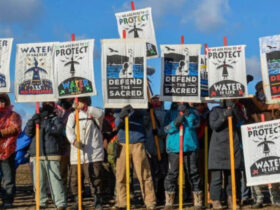 Indigenous Rights are Environmental Rights: Voices from the Frontlines of Climate Disaster

The COVID-19 pandemic has affected diplomatic relations across the world, with the U.S.-China relationship becoming especially antagonistic. Though it has not garnered the same media attention, the relationship between China and the African continent has also suffered as a result of the pandemic. In recent years, China has expanded its influence across Africa, drawing criticism for its neo-colonialist tactics. This article will take a closer look into this relationship and how the pandemic poses a threat to future collaboration between China and African countries.

China’s ties to the continent trace back to the post-colonial era in which it forged relationships with newly independent African nations. Chinese officials used diplomatic recognition of China over Taiwan as a bargaining tool, rewarding states that sided with Beijing instead of Taipei. Since the mid-1990s, China has focused its relations with Africa to be primarily economic. Today, China is the continent’s largest trading partner and has invested more in the continent than any other country.

The Belt and Road Initiative (BRI) is a notable example of China’s role in African economic development. Launched in 2013, the BRI enabled Chinese-funded infrastructure development to strengthen relations with participating countries and expand trade to circumvent routes controlled by the West. This initiative was especially popular in Africa, which faced shortages of resources and capital to build infrastructure. The BRI filled these infrastructure gaps and facilitated economic growth for these countries. Notable projects financed by China include a hydropower program in Nigeria; $3 billion in telecom equipment to Ethiopia, Sudan, and Ghana; and major railroad projects in Nigeria, Gabon, and Mauritania. These initiatives have considerably contributed to the development strategies of these countries. According to the World Bank, economic growth in Sub-Saharan Africa has averaged roughly 5% per year over the past decade, with the BRI improving living standards and bolstering human development indicators across the continent.

Opponents to the BRI, primarily Western countries, claim that China is engaging in “debt-trap diplomacy”, loaning excessively to developing countries and trapping them in debt to have strategic influence over them. Some Western politicians say China’s motives in Africa are not purely economic and are an effort to gain political support, similar to its tactics during the post-colonial period. Former US National Security Advisor, John Bolton, once criticized China for “…us[ing]bribes, opaque agreements, and the strategic use of debt to hold states in Africa captive to Beijing’s wishes and demands.” He claims that such “predatory actions” are a part of larger strategic initiatives, like the Belt and Road project.

Experts from Aid Data, a research lab at the College of William & Mary, found a positive correlation between Chinese economic assistance and the alignment of recipient countries with Beijing’s UN voting and its One China principle. Yet, some still believe China’s diplomatic ventures in Africa have received much more criticism than is deserved. During a congressional hearing on China’s presence and investment in Africa, Judd Devermont, the director of the Africa Program, at the Center for Strategic and International Studies, stated that, “it is essential to draw a clear distinction between Chinese activities that threaten U.S. interest and those that are neutral or complimentary.” In the same vein, Yun Sun from the Brookings Institution argued that “[c]onsidering the low priority of Africa in China’s overall foreign strategic mapping, a disproportionate level of international attention, publicity, and scrutiny is paid to China’s Africa engagement.”

The COVID-19 pandemic revealed the true nature of Africa’s relationship with China‒ a relationship characterized by massive debt and economic dependence. Amid the pandemic, African countries faced both a health and economic crisis: they needed to protect their citizens’ health while minimizing economic shocks. While addressing these concerns, many African countries, particularly Zambia and Djibouti, realized the size of their debt to China, which is widely regarded as Africa’s largest bilateral creditor. The Chinese government, banks, and state-owned enterprises are estimated to hold 17-24% of Africa’s external debt. Paying back this debt leaves African nations with minimal funds to address their health and economic problems.

To aid Africa with its pandemic response, the Chinese government has contributed to the International Monetary Fund’s Catastrophe Containment and Relief Trust to support debt service relief. It has also supported the eight-month debt moratorium or payment suspension offered to developing countries by the G-20. China’s unprecedented participation in these multilateral initiatives is a positive sign, but these solutions only provide short-term relief. The Chinese Foreign Ministry of Foreign Affairs said it is “keeping in contact” with developing countries on the debt issue, but there has not been much progress on that front.

Despite drawing criticism for silencing the early signs of the pandemic, Chinese support in handling the health crisis is appealing to African leaders, given China’s “demonstrated experience” in containing the virus. China has sent personal protection equipment to support 18 African countries, including Ghana, Nigeria, and Senegal. The Ghanian Minister of Foreign Affairs cited the gesture as “a testament of the enduring and exemplary relations between China and Africa.” However, others like the Nigerian Medical Association, who pushed back on the deployment of a Chinese medical team, are skeptical of China’s intentions, stating that Chinese assistance in Africa is a geopolitical move amid growing U.S.-China tensions.

China’s central role in aiding Africa throughout the pandemic contrasts with the mistreatment of African migrants in the Chinese city of Guangzhou. Social media footage showed African migrants, who were perceived to have coronavirus, being forcibly evicted from hotels, and forced to sleep on the streets. One clip even showed a restaurant that allegedly barred African migrants from entering. The Chinese government responded to the incidents by stating that it had “zero tolerance for discrimination” and that it was collaborating with local authorities to “improve their working method,” an explanation African leaders seemed to accept. The South African government, for example, cited that the incidents were “inconsistent with the excellent relations that exist between China and Africa.” The general public in Africa was not so quick to forget, with many taking to social media to express their anger over these discriminatory acts.

Africans also view these events to be representative of African leaders’ submissive attitude towards China. African governments have shied away from speaking out against Chinese injustice even when it affects their citizens, in order to protect their business pursuits. Former Senegalese President Abdoulaye Wade, like many other African leaders, believes that “[China] has a much greater sense of the personal urgency of development in Africa than many western nations.” However, in the eyes of the public, the suppression of these events has proven that neither China nor African governments have the African people’s best interests at heart.

The COVID-19 pandemic has unearthed the fundamental economic and political inequality of the Africa-China relationship. China’s massive lending to Africa may no longer be sustainable, given Africa’s difficulty paying back debt despite moratoriums and relief through multilateral agencies. Although China has been aiding Africa with both their economic and health crises, their relief is not long-term and it has only fueled the idea that China’s motives in Africa are more self-interested than benevolent.

China has always claimed that relations with African states are “win-win,” but the financial debt and the events in Guangzhou have revealed to the African people that they are not “winners,” especially if their governments remain silent to protect business interests. Experts, like Deprose Muchena of Amnesty International, say that “Beijing needs to back up its professed commitment to zero-tolerance of discrimination by changing the way it engages with Africans, both at home and abroad.”

Unless China finds a way to win over the support of the average African citizen, the future of a continued China-Africa relationship looks bleak.