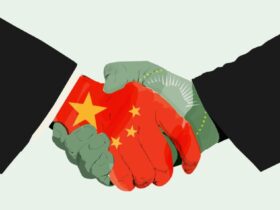 Beyond the Belt and Road: China-Africa Relations and the COVID-19 Pandemic

Feeling the crushing impacts of Western sanctions over recent years, Vladimir Putin has had to look elsewhere for political and economic influence. To do this, the Kremlin employs coordinated disinformation campaigns in several African countries. Using tested proxies that indirectly support Russian foreign policy, it gives a level of plausible deniability. These campaigns seek to accomplish a variety of goals: either prop up an isolated regime; foment anti-west, anti-UN, and antidemocratic sentiments; or promote positive foreign views of Russia.

Yevgeny Prigozhin, the Internet Research Agency, and the Wagner Group

At the center of Russia’s disinformation machine sits Yevgeny Prigozhin, a Russian oligarch, financier and member of Putin’s inner circle. Prigozhin (known as “Putin’s chef” because of his extensive catering contracts with Vladimir Putin) is well known for financing the Internet Research Agency (IRA) — a troll farm that was key in spreading disinformation in the 2016 U.S. presidential elections. Prigozhin also manages and finances the Wagner Group, which is interchangeably described as a private military company, a network of mercenaries or Putin’s de facto private army (though officially, this group does not exist).

The Wagner Group has overseen Russia’s strategic push in Africa, with media reports of their presence in the Central African Republic (CAR), Angola, the Democratic Republic of the Congo (DRC), Guinea, Guinea-Bissau, Madagascar, Mozambique, Sudan and Zimbabwe. These reports detail how the group allies with military commanders in conflict zones and receive payment for their services via cash or lucrative mining concessions for precious minerals like gold, diamonds, and uranium. They have been implicated in human rights violations in CAR and Mali. The latter recently welcomed Wagner Group mercenaries onto their borders following the pullout of French troops, and a coordinated network of Russian-linked social media accounts promoted Russian intervention prior to their arrival.

In addition to pushing for pro-Russian intervention sentiments, the Kremlin’s disinformation campaigns promote false narratives about vaccines, Russia’s invasion of Ukraine, the West and the food insecurity crisis. Russia also seeks to present itself as a viable economic alternative to the West.

Vaccine Narratives: As vaccines were being developed during the height of the coronavirus pandemic, U.S. analytics company Novetta found that the Russian Sputnik V vaccine received disproportionate coverage on African social media – with a combined 6.4% of quotes in all vaccine stories published by traditional African sources. Once information on Pfizer, Moderna and Oxford-AstraZeneca vaccines overshadowed these narratives, Novetta found that WhatsApp messages from Nigerian phone numbers were sent to devices in the DRC with links to fake news stories promoting Russian vaccines and discrediting American-made vaccines.

Anti-democracy and Anti-West Narratives: A State Department report has highlighted the ways in which Russian networks have promoted Russian policies in CAR and convinced journalists to write positively about Russia in Central and Western African states. In a report published by the Digital Forensic Research (DFR) Lab at the Atlantic Council, Russian networks promoted the Front du Refus aux Elections Imposees (FREI), an organization mobilizing anti-democracy protests in Mali.

Russia’s Invasion of Ukraine: In an effort to encourage support for its war of aggression in Ukraine, Russia has sowed misinformation into the African continent. Using whataboutism to divert attention, Russian media emphasized the treatment of African exchange students fleeing Ukraine and other global crises like in Yemen, Syria and Ethiopia, claiming that they are being overshadowed by coverage of Ukraine. State-affiliated media outlet Russia Today, the Russian Embassy of South Africa and the Russian Ministry of Foreign Affairs are among the most retweeted platforms spreading whataboutism. These platforms have also pushed anti-West and anti-NATO narratives, with hashtags like #abolishnato, #istandwithputin, #istandwithrussia, and #racistineu. These narratives pick up traction by inflaming existing tensions and grievances across the continent.

The Food Insecurity Crisis: One of the biggest repercussions of Russia’s invasion has been the global disruption of food security. Because of Ukraine’s role as the “breadbasket of Europe” (it is one of the world’s leading exporters in grain, particularly wheat and sunflower products) the war — and subsequent destruction of Ukraine’s agricultural infrastructure – has devastated millions. While food prices were rising before the war, Putin’s invasion has led to prices of food, fuel and fertilizer skyrocketing. To deflect blame from these economic shocks, Russian government officials, state-funded media and Kremlin-aligned proxy disinformation actors have taken coordinated efforts to falsely blame Western sanctions for worsening food insecurity. These campaigns specifically target Africa and the Middle East, the regions hurt most by the food insecurity crisis and are amplified by Kremlin-controlled state outlets such as RT Arabic and RT en Francais. Recently, Russian Foreign Minister Sergey Lavrov used a trip to the African continent to spin the crisis in favor of Russia.

While there has been a bigger investment in content moderation, Facebook has shown little ability to curb harmful disinformation campaigns despite its rapid expansion across Africa.

Even posts that are clear evidence of a coordinated political agenda are sometimes not removed because they don’t meet Facebook’s definition of “inauthentic.” Disinformation experts have also warned that social media companies’ content moderators will inherently do an inadequate job policing extremist content due to their lack of proficiency in local dialects. Facebook is not the only popular platform where Russian disinformation spreads — apps like WhatsApp, Twitter and Telegram also facilitate outsourced disinformation campaigns.

Though sometimes difficult, identifying disinformation is significantly easier than assessing its impact. Facebook has removed tens of thousands of posts across several different regions and countries, but it is often too early to assess the campaign’s success. In some instances, the campaigns appear to gain little traction in their environment. In Kenya, Russian campaigns that mischaracterize the Ukrainian invasion have had little impact on the population.

Other campaigns, however, experience more success. In Mali, for example, Russian-aligned social media campaigns building support for Wagner mercenaries have received notable traction. Facebook pages pushing pro-Russian views and support of Malian armed forces post frequently in coordination with identical accounts, with the largest page in this network having more than 90,000 followers.

Similarly, pro-Russia sentiments have become more visible during recent anti-France protests in Mali and in neighboring Senegal. In Burkina Faso, Moscow-friendly disinformation has permeated Burkinabe social media and increased Russian popularity in the country. Investigative analysis has shown a network of 175 Facebook pages that advance pro-Russian, anti-Western narratives, with several pages having tens of thousands of followers.

This engagement isn’t static, as local analysts have warned about its success. As Jordan Meda of FasoCheck said to the Washington Post, “We’re seeing a lot more fake news. More and more pro-Russia messages, and little by little, more calls for military collaboration with Russia from ordinary people.”

While it is unclear if these sentiments are directly linked to persistent digital disinformation efforts, the permeation of Russian influence in fragile African states creates fertile ground for violent extremism, anti-democratic tendencies and human rights abuses.