On the Road to Recovery: The Singapore and Hong Kong Travel Bubble

For almost three weeks, demonstrators in Ecuador — led by Ecuador’s largest Indigenous rights organization, the Confederation of Indigenous Nationalities of Ecuador (CONAIE) — forced the country’s capital into a standstill in a protest of nationwide economic inequality.

Ecuador is one of the many Latin American countries still suffering from the economic repercussions of the pandemic. Protesters claim Ecuador’s center-right government has done little to remediate the country’s economic situation as poverty and unemployment rates continue to skyrocket.

Ecuador’s indigenous communities — which CONAIE estimates make up 25 to 30% of the population — have been left particularly vulnerable as the cost of living grows nationwide. The country’s farmers, many of whom are indigenous, are forced to pay more for everyday items while receiving less for their agricultural products, allege protestors. Across the country, working-class Ecuadorians are seeing no increase in wages despite transportation, food and fuel rising in cost.

In a list of demands including price cuts on diesel and gasoline, controls on the price of food, and a commitment to invest in public healthcare and education, CONAIE called on the Ecuadorian government to make significant changes in support of its working-class citizens. In response, the government — led by conservative president Guillermo Lasso — declared a state of emergency in six provinces, including in the capital Quito.

Displeased with the government’s refusal to negotiate on CONAIE’s terms, protestors continued to block key roads and highways, causing shortages of food and fuel throughout Ecuador. Violent clashes with the police resulted in the deaths of several protestors and members of law enforcement, compelling CONAIE to demand the “demilitarization” of Ecuador as a precedent for negotiation talks.

Lasso and his administration remained wary of CONAIE, accusing the group of using the country’s economic situation as an excuse to overthrow the government. CONAIE, an organization powerful enough to have ousted three Ecuadorian presidents in the past, has certainly demonstrated the extent of their national influence. Protestors in the Amazon have succeeded in stopping more than half of the country’s standard oil production while the government claims that the tens of thousands marching on the streets of Quito have cost the economy more than fifty million dollars every day.

As CONAIE maintained its blockade, many in the Ecuadorian government sought bureaucratic measures to end this conflict. On June 20th, Ecuador’s parliament voted 81 to 56 in favor of the government pursuing dialogue with the protestors. Lasso refused to remove the upscaled military and police presence in Quito — stalling any chance at peace talks. On June 24, after the protests had persisted for two straight weeks, a group of opposition lawmakers began to push for the removal of President Lasso, taking advantage of the assembly’s constitutional right to unseat a president during a time of national unrest.

Lasso’s relationship with the national assembly was already strained after criticism of his weak response to the growing rate of violent crime in Ecuador. Though Lasso initially polled well after his election in 2021, his approval rating dropped from 75% to 38.5% from September 2021 to May 2022. Having lost the full confidence of his government and people, all eyes were on the Ecuadorian present as he sat down on June 27 for the preliminary talks with CONAIE president Leonidas Iza.

The concessions that Lasso had made so far — a 10-cent per gallon price cut on gas and diesel prices, subsidies on fertilizer, debt forgiveness, and the partial demilitarization of areas of Ecuador — cost the government another $600 million in addition to the $500 million Lasso claims the economy has already suffered across various sectors. Still, Iza says it’s not enough. The Indigenous activist and leader reaffirmed that CONAIE would not stop the demonstrations until all its demands were met, including assurance that prices of food, gas, and transportation become affordable for all Ecuadorians.

Lasso responded by calling Iza an “opportunist” and publicly refused to continue any negotiations with Iza, though Lasso later stated that the government was still willing to resolve the situation through peaceful dialogue.

Meanwhile, Ecuadorian lawmakers put forth a vote of no confidence into motion. Though the vote failed, it revealed the shaky grounds on which Lasso’s authority stands: his presidency survived by only 12 votes.

Lasso, unable to come to satisfactory terms with Iza and desperate to prove his authority amidst movement towards impeachment, decided to take a more aggressive approach against the protests. The president declared a month-long state of exception in four provinces — Quito excluded — to protect the country’s oil and fuel supply as well as food and medicine.
Finally, on June 30th, the protests came to an end as Iza and government minister Francisco Jimenez, with the help of a mediator, reached a deal. The two agreed that the price of gas and diesel would be lowered by 15¢ and assurances were made that oil exploration and mining activity be limited to protect Ecuador’s protected areas. Under these conditions, which the government is required to meet within 90 days, CONAIE concluded the national strike which shut Ecuador down for 18 days, proving to the world the political power of Ecuador’s Indigenous peoples.

Financing Energy Transition: Latin America and the Caribbean at COP 27 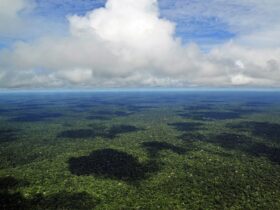 How Brazil’s Election Will Affect the Global Climate