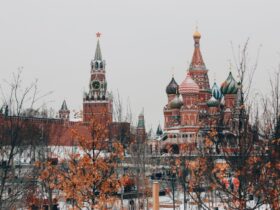 The Possibilities of a Post-Putin Russia

LOS ANGELES — “If you know of any addicts, go ahead and kill them yourself,” said Philippines President Rodrigo Duterte, whose son stepped down from office after being linked to a $125 million drug trafficking operation.

As an international student from the Philippines, Carl Sijuco, who asked to use a pseudonym for safety concerns, is no stranger to a political culture of hypocrisy. Sijuco said that while he is fortunate to enjoy a very comfortable lifestyle in the Philippines and acknowledges that his partial European ancestry gives him a fair complexion that comes with privilege and status, his country’s deep corruption remains highly visible

The Philippines is a Southeast Asian island nation with robust history, unique geographic features, and more biodiversity than the Great Barrier Reef. It is also a country with corruption and turmoil deeply embedded into its political culture. Transparency International’s Corruption Perception Index consistently ranks the Philippines in the bottom half of the world in public sector corruption. In many ways, the persistence of government corruption has bred what Sijuco describes as a “culture of complacency,” or an acceptance and expectation of incompetence and crime.

Sijuco explained that the Philippines is in the Ring of Fire and historically has weathered devastating storms. He makes an interesting observation about the relationship between geography and culture.

“There’s this kind of cultural sentiment that people will just come back and pick themselves up after a storm,” he said. “[But] more and more people are getting upset over that, because that shouldn’t be the norm. We don’t have to persevere through everything; [that mentality just feeds into]how much corruption there is!”

The 2013 Pork Barrel scam demonstrated how blatant this corruption can be. In this scheme, discretionary funds meant to support local governments in providing public goods, like education and culture, were instead siphoned off by government officials using phony businesses as a cover, resulting in hundreds of millions diverted away from public services. The blame was attributed to a few scapegoats, but the roots of the corruption were never addressed. The 2020 Global Corruption Barometer reveals that 86% of Filipinos think government corruption is a big problem, while roughly one in five reported paying bribes that year.

While fund mismanagement and diversion persists, an equally concerning issue is theft through nepotism and cronyism. Duterte’s treatment of his hometown, Davao, is a telling example. After Duterte moved on from his role as mayor of the region, his daughter filled the position and his son assumed the role of vice mayor. After the aforementioned allegations of fund misuse, Duterte’s son stepped down and his other son became vice mayor.

According to the Philippine Center for Investigative Journalism, since assuming the presidency, Duterte has awarded almost $500 million dollars in government contracts to his friend, former Special Assistant and Head of Presidential Management Staff and current Senator Bong Go, in their shared hometown of Davao for infrastructural projects that seem often go uncompleted.

However, in the Philippines, holding politicians publicly accountable is often a surefire way to end your career. Maria Ressa, CEO of Rappler, an online media site, was recently jailed for cyber libel after exposing ties between a businessman and a local judge. In the Philippines, honest journalists stand a lot more to lose than their careers. According to the Committee to Protect Journalists, 149 journalists and media workers have been killed in the country since 1992. Of those deaths, 84 are attributed to the murdering of journalists. Reporters Without Borders ranks the Philippines 138 of 180 countries on the 2020 World Press Freedom Index.

Additionally, there is a strong nepotistic oligarchy in the Philippines, leaving it stuck in a cycle of unscrupulous governance. The ‘padrino’ system dominates politics, where connections are more important than your merit. While there have been attempts to legislate on the unspoken institution, efforts never gain enough political traction.

“History repeats itself, but nobody learns and everyone is surprised,” said Sijuco, who noted the power of competing clans and powerful business families.

In one personal instance, Sijuco said that he was socializing with children of oligarchs, and in a conversation learned of how deeply personal and how closely connected corruption was in all of his circles.

“I know my family is corrupt as [expletive], who cares, shots on me!” Sijuco once heard from a friend over drinks. “The Filipino upper class is so detached from the rest of the country.”

While the elites compete over old feuds, 88.6% of Filipino families report worrying about their finances, and around one in five Filipinos are living in abject poverty. The country’s wealth gap is also divided along ethnic lines. The wealthiest are ethnically less Filipino than the poorest. The divisive remnants of the country’s colonialist past and ongoing income inequality issues has created a system with clear winners and losers.  The problem is exacerbated by the country’s political and finance systems.

”I’ve been pulled over for speeding a few times in Manila, and each time the idea that I’d shoot them some money for a bribe was a foregone conclusion to them,” Sijuco said.“Based on what you look like or what you drive, they know you can afford it.”

A current and more systemic example is the government’s response to the COVID-19 pandemic. Facing a vaccine hesitant population, obstacles to vaccine approval, and the second highest death toll in Central Asia, the country is just now starting to see its worst infection spike to date subside, with mandatory lockdowns going into effect nationwide.

Sijuco discussed how ongoing corruption in the country has exacerbated the public health crisis. He said he knows friends who have paid off medical doctors to falsify negative test results so they would not have to cancel their vacations.

“They know they’ll be able to afford any treatment they need,” Sijuco said. “There’s this sort of idea that if you’re rich, you’re entitled to break the rules.”

Sijuco witnessed this inequality every day. Outside the walls of his private high school was a slum and just one hour away from his home, Sijuco describes Tondo, a town built on garbage and waste with no infrastructure and few opportunities for socioeconomic mobilization.

Sijuco described an increasingly common phenomenon of poverty-stricken Filipinos living in graveyards, maintaining the graves in exchange for being allowed to settle. He said the picture of poverty in the Philippines paints a stark contrast to the global image of Manila, full of highrises and nightclubs. Sijuco said Google Image results often paint a wildly inaccurate picture of modernity and prosperity in the Philippines. According to Credit Suisse estimates, the Philippines is the ninth most unequal country in the world.

But Sijuco is cautiously optimistic about the future of his home country.

“There’s hope, but way down the road,” he said. “Before I’m middle-aged, nothing will probably change drastically unless there’s a complete overhaul of the cabinet, the system, everything. Otherwise, there are too many fingers in too many different pies between different people.”

When asked if things will get worse before they get better, or if the country may even see another people’s revolution, Sijuco hopes that regardless of the future, transparency is prioritized.

“Well, there probably won’t be another revolution after the last one led to martial law and military dictatorship and I don’t think things will get worse,” Sinjuco said. “With technology, all of these social movements, all eyes on everything: nothing is able to be hidden anymore.”

Dariush Onsori is a senior majoring in International Relations Global Business and minoring in Computer Science. Especially as an Iranian-American, foreign affairs and the nuances that shape them have always fascinated him. Darisuh has previously interned in the French Parliament. In his free time, he enjoys being outdoors in nature as much as possible, exploring (and trying to make) music, and getting mad at my TV when the news is on!