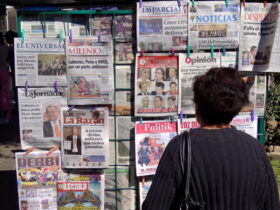 Journalistic Resilience: The Dangers of Political Revelation in Mexico

With the ongoing 2020 presidential election, it’s worth noting which political issues are prioritized among current candidates. This year, climate change has received increased awareness among voters and an increased pressure to respond to voter concerns from the current U.S. presidential nominees, former Vice President Joe Biden and President Donald Trump.

However, in a polarized America, these acknowledgments of the climate crises have differed drastically. Thus, it is worth exploring how American political attitudes have impacted the United States’ crisis response and mitigation.  Do disparities in candidates’ attitudes toward climate change cause radical or influential shifts in support among voters? This article will take a closer look at rising concerns regarding climate change and its confluence with the 2020 presidential election.

Waking Up to Devastation

In recent years, the United States has seen a rising trend of natural disasters that are exacerbated by the climate crisis. In the United States, the severity of the problem has been especially prominent. This summer alone, the Midwest experienced floods, the Southeast lived through a dramatic start to hurricane season, and the West saw the extent of dramatic wildfires that have increased over the past 40 years.

These extreme events have taken a huge toll on citizens’ everyday life. For instance, the Midwest lost 14 million acres of fertile soil due to significant flood damage in 2019, causing massive losses in crop production. According to the U.S Department of Agriculture, farmers faced significant challenges as they were unable to plant crops such as corn, soybeans and wheat, largely due to unfavorable weather conditions. Meanwhile, the Western parts of the United States have recently experienced the devastating effects of wildfires with locals suffering from extremely poor air quality and resource devastation. The warming climate has induced and magnified the extent of extreme weather conditions as it creates a combination of low humidity, increased temperatures and as low precipitations.

As the effects of climate change become more tangible for populations throughout the world, voters have a stronger tendency to rank climate change as one of their top issues. Voters who prioritize climate change as a key issue look to elected officials and the two major U.S. political parties for plans of action. According to a 2019 survey conducted by the Pew Research Center, two thirds of U.S. citizens argue that the federal government is not doing enough to prevent further climate change.

Public concern regarding the effects of climate change has increased compared to that of a decade ago in a January 2020 survey.These trends indicate that tackling the climate crisis should be considered as a top priority for the U.S. government. With the added local effects of climate change, it is understandable why U.S. voters are becoming more inclined to pay more attention to climate vote. Now let’s take a closer look at different positions and attitudes towards climate change by the two presidential candidates.

Republican nominee President Donald Trump has long been a firm denier of climate change. Trump has made false claims on social media platforms, such as touting a conspiracy theory that “the concept of global warming was created by the Chinese in order to make U.S. manufacturing non-competitive” and taunting climate believers by tweeting “It’s freezing in New York — where the hell is global warming.”

In a move even more damaging, Trump has pulled the U.S. out of the Paris Agreement, the 2015 multilateral agreement that brought together a coalition of countries to tackle carbon emissions and climate change. Being the only nation that voluntarily exited the agreement, the U.S. hindered global efforts of tackling climate change by not contributing to its collective endeavors. In addition to this decision, Trump has reversed several domestic environmental protection policies and has pressed for increased oil, natural gas, and coal output. He has also stressed the significance of maintaining fossil fuels as an important energy source in order to hold down operational costs for domestic businesses . According to Rhodium Group, a climate research firm, Trump’s belief in resurrecting fossil fuels would release an excess of 1.8 billion tons of greenhouse gas emissions into the atmosphere by 2035, which would contribute to irreversible damage to the environment.

However, Trump has recently included climate change as a talking point during one of his campaign rallies, a concession that signifies the rising importance of this issue across the political spectrum — Trump has proposed to join the tree-planting initiative. During a talk with Janet Ranganathan of the World Resources Institute, he stated that his administration is “committed to conserving the majesty of God’s creation and the natural beauty of our world.” This development in his attitude represents an alignment of his concerns along with that of the general public. However, this announcement has been met with criticism from scientists and climate experts who point out that planting too many trees may not be as beneficial as it may seem. Instead, it could become a potential hazard as there are serious risks of ecological evasion and habitat destruction. Therefore, these experts emphasize that cooperative endeavors should be made to protect existing forests.

On the contrary, Biden has shown a much more cooperative and multilateral attitude toward climate change. Not only has he listed combating climate change as one of the four main pillars of his election campaign, but he has announced his $2 trillion green plan and his determination to bring the U.S back on track to tackle climate change alongside with the global community during the presidential debate.

In the past, Biden has long been an advocate of environmental issues; he voted in line with environmental protection 83% of the time during his tenure in the U.S. Senate. In direct opposition to the position Trump has taken, Biden aims to win the support of young activists and pushes for a stricter deadline for reducing greenhouse gas emissions. More specifically, Biden has put forth a goal for the U.S to reach net-zero emission by 2050 and eliminate carbon pollution. Such ambition clearly contradicts Trump’s damaging and alternating attitude regarding the existence of climate change.

While it is true that more Americans are acknowledging climate change as a major concern more than ever, this is largely split along partisan lines. There are significant political disparities between the Democrats and Republicans. According to a Pew Research Center survey there is a 20 and 27 point increase within liberal Democrats and conservative Democrats respectively in the perceived importance of tackling climate change. In contrast, climate change policy has yet to become a priority for the Republican Party, with only 21% of Republicans conceding that there should be increasing emphasis on climate policies.

As discrepancies in the acknowledgment of climate change policies differ between Democrats and Republicans, the general public has witnessed traumatic consequences caused by climate change in different parts of the country. And despite different attitudes and the extent of general acceptance of climate change among scientists, there is a growing national consciousness in regards to include climate on the ballot due to the devastating effects of climate change.

Climate change has become one of the top-tier issues in American politics and will continue to tug at national awareness. The outcome of the 2020 election as well as the eventual results of the Senate runoff elections in January will be instrumental in determining the political party in charge of the country and the subsequent approach to climate change over the next four years.

Elena Zhai is a senior correspondent of Glimpse and a senior majoring in both International Relations Global Economy and French at the University of Southern California. She is from China, Shanghai and is particularly interested in political and economic affairs of China. She has studied aboard for a summer in France participating in the Paris summer program by School of international Relations. During which she took classes on European history and policy making regarding the integration process of the European Union. On campus, she is also currently a member of Ascend USC Chapter. Her special area of interest includes human rights, economic policies as well as sustainable environment development.