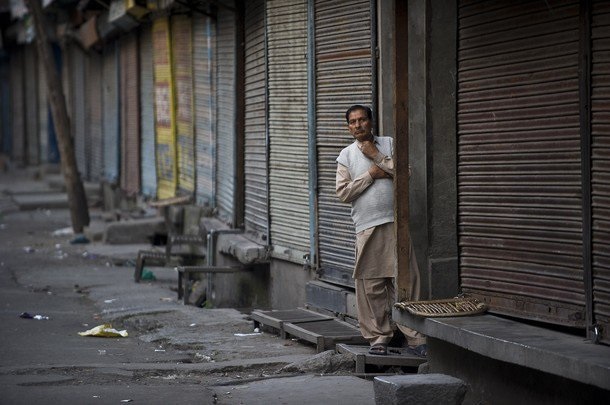 The beginning of August kicks off apple season in Kashmir, but ungathered fruit rots across orchids in the region. Schools and colleges remain deserted, and markets and streets lack their usual flutter. Shops remain open for a handful of hours in the morning before retracting into curfew and telecommunication lines remain closed off.

August 5, 2019, marked the end of Jammu & Kashmir’s (J&K) semi-autonomous status under the Constitution of India. India’s Hindu nationalist Bharatiya Janata Party (BJP), led by quintessential strongman Prime Minister Narendra Modi, has continuously called for the revocation of the two major concessions given to Kashmir in the Indian constitution in 1950 – Article 370 and Article 35A, in its electoral manifestos. As part of this restructuring, the Modi government redrew the political map by splitting it into two Union Territories directly under the rule of New Delhi, J&K and Ladakh. The stripping of these constitutional provisions was coupled with large-scale troop deployment, communication blockades, and detainment of prominent political leaders in the region. The crackdown left over eight million people lacking cell phone, landline and internet access. The state also implemented a strict curfew for citizens. It has been six months since the historic decision and as the gradual restoration of civil liberties occurs in the Valley, it is imperative to evaluate the government’s management in the aftermath.

Why is Kashmir Important?

Kashmir is a valley in the Himalayan region that both Pakistan and India lay claim to. During the partition of India and Pakistan, over 565 princely states were divided and merged with one of the two countries. Kashmir was granted special status after Raja Hari Singh, J&K’s ruler at the time, signed the Instrument of Accession treaty with India in return for help against an invasion of tribesmen from Pakistan. This treaty had one historically exceptional caveat: the local government of J&K would maintain sovereignty on laws in all areas except foreign relations, communications, and defense. The accession of Jammu and Kashmir into India and the formation of “Azad Kashmir” administered by Pakistan was established after the involvement of Pakistani troops as an outcome of this concession and the subsequent UN-brokered ceasefire line in 1949. The ceasefire line, or Line of Control, serves as a de facto border between areas of Kashmir, controlled by the respective countries. Ever since the Partition, this region has been a central point of contention between the two nuclear-armed countries, including two wars. A separatist insurgency against Indian rule has engulfed the state, making it one of the most militarized regions in the world; firings, stone pelting, protests, curfews and communication clampdowns are now a regular occurrence in the Valley.

The dilution of Article 370 and annulment of Article 35A have resulted in significant ramifications for the people of Kashmir in a region undergoing a three-decade-long armed revolt. Article 370 and its provisions allowed the state to have its own constitution, the freedom to make laws, and a separate flag. More specifically, rules on permanent residency, ownership of property, and fundamental rights were upheld by the local government. Non-residents were restricted from purchasing property or settling in the region. Under Article 35A, residents with permanent resident certificates were also entitled to benefits regarding scholarships, employment, etc. Essentially, the significance of this constitutional provision was that it upheld the region’s demographic character and underpinned, to a certain degree, India’s fragile relationship with its sole Muslim majority state.

India’s Government: One Nation, One Law

India’s BJP led government hails the revocation of J&K’s seven-decade long autonomy as a correction of a “historical blunder”. Their goal is to integrate Kashmir into the rest of India. Modi and Home Minister Amit Shah reiterated that Articles 370 and 35A eroded the economic and democratic foundations of the country,exacerbated corruption and  hindered development. New infrastructure projects in the region will be expedited and the move will be significant in fighting separatism within the region while combating youth militancy among Kashmiri teenagers. Other officials, like the Indian Ambassador to the US, wrote in a New York Times column that the revocation “opens the door to rejuvenate a moribund economy.” However, the Kashmir Chamber of Commerce and Industry has estimated that the clampdown has already cost the state over $1.4 billion. Critics of the move argue that it is an imperative diversion from the economic slowdown that India has been facing under the current administration.

Opposition parties have raised concerns about the detention of prominent political leaders in the region. National Conference leader Omar Abdullah cites the move as “unilateral and shocking”, and a “betrayal of trust” of the people of J&K. Former chief minister Mehbooba Mufti said the move is symbolic of the BJP-led government’s desire to change the demography of the Muslim majority state. Both Abdullah and Mufti remain under house arrest after being considered “anti-national separatists”. The two are mainstream Kashmiri politicians who have, in the past, braved elections in the region and maintained their allegiance to the Indian state. Such conduct, without conducive dialogue, is a worrisome aspect of how the current administration is handling the issue. Congress leader Ghulam Nabi Azad has gone on to say that the government “wiped out Jammu and Kashmir’s identity”. As a union territory, the federal government has direct control over the affairs in the region. However, Shah, the home minister, and Modi’s second-in-command has said that complete statehood will be reinstated once “normalcy” returns.

Though the internet and mobile services have been cut off previously in times of turmoil, this time  the government has also restricted landlines and television, deeming these measures to be “precautionary”. Cell phone services were available again on October 14th, but the internet remains restricted. A rise in insurgencies may be imminent as the state slowly restores to normalcy. Instances of violence have already prevailed as the so-called “iron wall” dismantles in Kashmir. On October 16th, two civilians were killed in an attack by suspected militants, and three alleged rebels by the Indian Armed forces. Shortly after, shelling carried out on either side of the line of control led to the demise of nine soldiers and civilians. The uncertain state of security makes it difficult for the handicrafts and tourism industries to bounce back fast. Over 1.5 million Kashmiri children remain unable to attend school. Petitions to relax the “virtual blackout” and ease restrictions filed in the Supreme Court of India have not received immediate attention either. The unfortunate truth is that the current state of affairs is all but uncommon in the Valley.

A politically backed mechanism that allows the people of Kashmir to address their grievances is necessary, especially since the disruptive move was not preceded by dialogue with political leaders or civil society members in the region. This misinformation itself does not bode well for India’s democratic foundation. Though the revocation does politically benefit Modi’s agenda by delivering on an old electoral promise from the Hindu nationalist party’s manifesto, it throws Kashmir’s future into uncertainty. The decision can either be a setback to years of peace-building efforts or a game-changer in terms of better governance and security in the region. Kashmir’s special status, coupled with its own constitution and flag, which was situated beside the Indian tricolor on all government property, was a mechanism by which its historic uniqueness was assimilated into India’s vibrant democracy. It was also a mechanism that tried to negate secessionist insurgency and terrorism funneling in from Pakistan. An abrogation of the special status impacts the people of Kashmir the most. Most of them remain fearful to return to living their normal lives, while others refuse to do so as they are adamant to disobey New Delhi.

Ananya Anand is a senior majoring in International Relations and Global Business with a focus on financial management and a minor in Economics. Born and raised in New Delhi, India, she has always been curious to learn about how to world works, which is why she has seized opportunities to travel while learning. Last summer she spent her summer doing a Maymester in Tokyo studying Japanese culture and the economy and this summer, she worked for a think tank in Washington DC followed by a tech startup in Shanghai. She is passionate about international economic development and policy analysis and hopes to pursue a career around development and integration of developing countries into the developed world socially, economically, culturally and technologically. She is fluent in Hindi and can read and write French. She looks forward to bringing forward stories about the affairs of the world in different contexts with Glimpse from the Globe