Trending:
You are at:Home»Regions»Americas»A Trade War With China Might Not Be a Bad Thing
By Henry Algert on May 18, 2018 Americas, East Asia and the Pacific, Economics, Op-Ed, Uncategorized 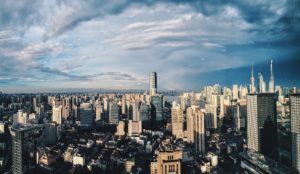 Trade wars are unequivocally bad; most experts agree that economic efficiency is lost and everyday consumers ultimately bear the brunt of the pain. Both the United States and China have trillions of dollars in export revenues at stake in a global trade war, and contrary to President Trump’s tweets, trade wars are neither “good” nor “easy to win.”

While still in its early stages, a trade confrontation between the two powers is rapidly brewing. The Trump Administration’s proposed $50 billion in tariffs against China are still only threats, but carry a very real possibility of being enacted if last-minute negotiations prove unsuccessful. The already escalating rhetoric between China and the United States has the potential to wreak havoc not only on the two countries, but also on the entire global economy. How can such a damaging foreign policy maneuver possibly be in the interests of the US?

Frankly, China is the single-biggest threat to the continuation of the liberal economic order. Dedicated to the principles of open markets and private property, the Bretton Woods system was established at the end of World War II and led to the creation of liberal institutions like the International Monetary Fund in 1945 and World Trade Organization in 1995.

This liberal system fostered investment and competition in developing countries that helped spread prosperity across the globe. Between 1990 to 2010, more than 1 billion people were lifted out of extreme poverty and the worldwide poverty rate was cut in half. These benefits clearly spilled over to China, where poverty rates fell from over 80% in 1980 to 6.5% in 2012. Mao Zedong’s Five Year Plans and a command economy were eventually replaced by Deng Xiaoping’s Open Door Policy, which enacted greater capitalist reforms and opened China to foreign investors after decades of isolation. China’s gradual progress towards economic liberalization culminated in the accession of China to the WTO in 2001, symbolizing its full assimilation into this international order.

Fast-forward more than a decade and China’s market reforms have largely stalled and even started backsliding. A sixteen-year member of the WTO and the second largest economy in the world, China has abdicated its responsibility of encouraging open markets and competition. While its current protectionist policies today are nowhere near as severe as earlier hardline Communist laws, they clearly violate the liberal principles China committed to when it entered the WTO.

First, China imposes capital controls on foreign money transfers and has been controversially accused of currency manipulation in the past. Many believe that in the past China has kept the Yuan artificially devalued through foreign exchange operations.

Second, China has enacted significant hurdles to foreign investment. In certain industries like finance and automotives, China requires foreign investors to operate as joint-ventures with domestic Chinese firms. In many industries, foreign firms have to share technology and customer data with their Chinese partners in order to gain market access.

For example, in 2017, Apple was forced to comply with a new Chinese cybersecurity regulation by agreeing to store the data of all iCloud users registered in mainland-China with a national firm within Chinese borders. Significant backlash over privacy and human rights concerns erupted immediately as the move likely makes that user data available to Chinese authorities. Apple’s Chinese data host, Guizhou Cloud Big Data, is owned by the Guizhou provincial government and has ties to the national Communist Party government. Prior to this move, requests for user data had to be conducted under US privacy laws and courts. Instead, requests or search warrants for user data are now subject to negligible Chinese privacy rights. Other American-based firms like Amazon and Microsoft have similarly been forced to partner with Chinese firms in order to continue operations in China.

Third and most concerning is the intellectual property theft of American and European proprietary technology by Chinese enterprises–and the fact that President Xi Jinping’s government has largely turned a blind eye towards it.

In January 2018, Chinese wind turbine manufacturer Sinovel was found guilty of stealing the software code of a US company, ASMC. Sinvoel submitted an $800 million parts order with ASMC, but instead secretly downloaded software that the Chinese firm then used to build the parts themselves. The $50 billion value proposed by the Trump Administration’s tariffs is largely based on a seven-month investigation by US Trade Representative Robert Lighthizer that valued US business losses due to IP theft by Chinese firms at between $225 billion and $600 billion annualized.

Robert Atkinson, President of the U.S. based technology think tank Information Technology and Innovation Foundation, remarked on the recent 15-year anniversary of China’s accession to the WTO that “trade with China has been one step forward, two steps back for 15 years. Each time China claims to move toward opening up trade, it turns around and introduces another new mercantilist trade barrier to counteract it.”

Historically, the United States and EU have enforced international trade policy through WTO dispute resolution mechanisms, but these have proved laughably ineffective in changing Chinese trade practices. China, unfazed by weak complaints or rulings in the WTO, has continued to impose various measures that have stifled competition and foreign investment in its economy. International condemnation has rarely succeeded in constraining Chinese behavior, whether in the military matters like the South China Sea or in trade disputes.

Time Is Running Out

The Western liberal order must strike back before it is too late–now may be its last chance to coerce China into changing its unacceptable behavior. Over the past decade, shifting market dynamics in international trade and in China’s domestic market have been gradually undermining the effectiveness of any US response.

Although China’s $375 billion trade deficit with the United States may lead some to believe it has more to lose on in an economic confrontation, other statistics show a different picture. For instance, China’s economic reliance on exports peaked in 2006 at 37% of GDP. As of 2016 that statistic was 19.64% and falling. As China’s economy further matures, rising domestic consumption will continue to diminish the leverage of the United States and EU.

However, these two trading partners still account for almost 40% of China’s exports, providing a window of real opportunity to effect change. While a trade war will absolutely hurt both the West and China in the near-term, sometimes short-term interests need to be sacrificed for greater gains down the road. To preserve the integrity of the WTO and liberal economic order that has spread so much prosperity in the world, a starkly more forceful response of retaliatory tariffs and measures is in order–and a trade war may be the only instrument left to do so.

Although a trade war will undoubtedly hurt every participant in the near-term, there is a lot more at stake to the West than $100-odd billion in exports. The current free market principles not only form the foundation of American and European economic strength, but also lead to global development by promoting democracy through the trade of goods and ideas. Without the liberal economic system, the global innovation driving human progress would be stifled by the forces of inequality and corruption.

The Flawed Response of the Trump Administration

Alarmingly, President Trump and his administration have failed to understand that a trade war could only be truly effective against Chinese practices through multilateralism. Traditional threats of raised import tariffs and tit-for-tat escalation will never move a China that is supremely confident in its economic trajectory.

The Trump Administration’s “America First” position and recently declared steel and aluminum tariffs have already proven inadequate. China is only a minor exporter to the US of both materials, giving these extremely questionable measures no real bite. Even worse, threatening European and North American allies with these same tariffs further undermines the Trump Administration’s ability to lead a united response against China. Only with a return to the roots of liberal internationalism through cooperation among a wide coalition of countries can the West achieve real progress with China.

Many in the EU institutional framework see the urgent need to uphold the values of free trade in China. European Commission Vice-President for Jobs, Growth, Investment, and Competitiveness, Jyrki Katainen told Bloomberg in April, “we expect reciprocity from China, though we understand that it doesn’t happen overnight.” EU countries from Germany to the Netherlands have similar complaints about Chinese trade policies and would likely be willing to form an international coalition with the United States.

President Trump has a point in criticizing mercantilist Chinese practices, but his ignorance of multilateralism prevents any impactful change. Cooperation between the EU, US, and other partners like Canada and Japan has significantly higher chances of success than the Trump Administration’s foolhardy approach.

However, such retaliatory measures would not represent a final solution. The United States, European Union, and China are the three biggest trading powers in the world and must continue to trade with each other in a mutually beneficial manner. A trade war could create the leverage needed by the West prior to negotiations, but a multilateral agreement is the only permanent solution that could concretely open China’s market.

There is immense political pressure on Trump and Xi as they seek a deal that allows China to save face while making the necessary concessions. But China will not be bullied— the West would need to offer significant incentives in any deal. America and the EU would need to lower certain tariffs or sign investment deals, while in return China would have to take very significant steps towards liberalizing its domestic economy to foreign investors.

A trade war is only beneficial if a long-term pact is the legitimate goal both parties seek. The frightening question is whether Trump or Xi are even entertaining this possibility.