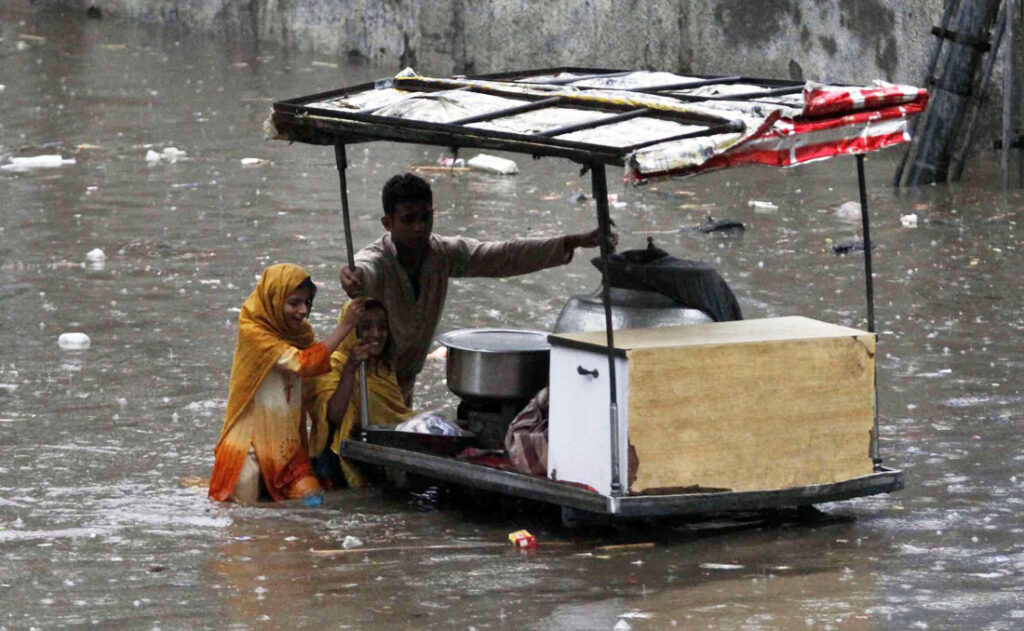 History was made last month when 175 countries, including Pakistan, signed the Paris Climate Change Agreement—the largest single-day signing of an international agreement, coinciding with the 50th anniversary of Earth Day. The agreement pledges to collectively limit global temperature rise to below 3.6 degrees Fahrenheit. It also includes initiatives such as a development plan for renewable energy, an International Solar Energy Alliance between India and France and a high-level coalition to set a price for fossil fuels and coal. However, the agreement must be ratified and approved by each individual country and does not go into effect until at least 55 countries, representing approximately 55 percent of global emission, formally join, which could take years.

Though Pakistan has signed the agreement, its former climate change record—or lack thereof—is questionable, and Pakistan’s signature does not necessarily reflect its commitment to implement climate change reform as a top priority. In the December COP 21 talks, Pakistan submitted a weak, one-page “Intended Nationally Determined Contributions” document, as it continues to expand coal power.

With hostile neighbors, a powerful military and a developing economy, Pakistan prioritizes terrorism and nuclear development as its national security concerns. However, the threat of climate change will slowly devastate Pakistan’s economic, social and political structure, exacerbating interstate conflict with India through climate-induced transboundary migration. The Pakistani government and its citizens must recognize climate change as a security concern and focus on implementing adaptation policies to control damage from climate-induced disasters.

Pakistan’s Water Crisis
Destructive floods, heat waves and droughts have increased over the last five years, claiming the lives of thousands of Pakistanis, shattering communities and earning it a reputation as one of the most water-stressed countries in the world. Pakistan contributes just 0.8% of global emissions, and yet it stands as one of the more heavily climate-affected countries. These natural disasters have broader repercussions for Pakistan’s agribusiness. As an agrarian economy, Pakistan’s agriculture sector contributes about 24 percent of Pakistan’s GDP, employs half of the labor force and provides the largest source of foreign exchange earnings. With such a dramatic reliance on farmable land, it is vital that crops are supplied efficiently with water and proper irrigation techniques. Due to rising global temperatures, severe droughts and heat waves have affected precious arable land and exacerbated historically dry areas such as the Tharparkar District of Sindh, home to Pakistan’s largest desert.  Deadly heat waves killed more than 780 people in Karachi, a major economic hub, and more than 800 people in Sindh in June of last year. In its third straight drought year, 200 lives have already been claimed since January, 2016.

At the other end of the spectrum, rapid melting of polar ice caps, heavy monsoon rains and rising sea levels have led to massive floods throughout Pakistan. They are destroying homes, billions of dollars’ worth of crops, increasing unemployment and inflation rates, displacing people and killing many.

Meanwhile, the Arabian Sea’s rising levels have caused it to flow into the Indus River Delta, leading to land erosion and salinity in freshwater creeks and shores. The salinization of land sinks deep into the surface and makes groundwater aquifers unfit for human consumption. The salinity of water at Karachi’s shores has reached an astounding 35,500-36,900 parts per million (PPM), forcing villages in coastal areas to evacuate because their aquifers became non-drinkable.

Climate-induced transboundary migration and conflict
Devastating natural disasters are causing people to migrate out of their communities and across the border into India. According to the Global Military Advisory Council on Climate Change, it is projected that sea level rise will produce 35-40 million climate refugees in the coming years. Sea level rise causes permanent migration, as agricultural commodities cannot be rebuilt in salinized soil.

Of course, Pakistan and India have a history of tense ethno-religious civil conflict. With such a vast number of refugees projected, there is a possibility that India may close its borders or restrict refugees from entrance. In 2012, India built a 2,500 mile fence to seal the India-Bangladesh international border, and its security force established a shoot-to-kill policy. With such stringent regulation of illegal Bangladeshi immigrants, there is no doubt that harsher rules may be applied to Pakistani refugees.

Already overpopulated and suffering from its own rising sea levels, Bangladesh, formerly East Pakistan, will not be able to withstand the mass of Pakistani refugees.

Next steps
Pakistan is not just a victim of external circumstances. Poor water conservation is economically and politically linked to the country’s droughts and floods. Pakistan could mitigate water poverty by reforming conservation and building more reservoirs and advanced irrigation systems to address agricultural, industrial and energy needs. Almost 70 percent of Pakistan’s 11.5 inches of annual rainwater is wasted due to poor storage facilities and silt buildup in water reservoirs.

According to the Pakistan Water Partnership, Pakistan is working to put into effect measures regarding flood water management, waste water recycling and rainwater harvesting. In efforts to minimize disaster risk, the Pakistan Meteorological Department is working on radar systems that provide warnings about the heat waves and floods up to 250 miles away. Additionally, Pakistan should increase its investment in water storage infrastructure and water farming techniques such as drip irrigation, which allows water to drip slowly to plant roots or soil surfaces.

But the Pakistani government’s climate change budget is a mere $586,000. Pakistan needs to work on properly managing its financial resources, specifically toward infrastructure development and water conservation and establish sustainable development goals within its means. Pakistan can develop public-private partnerships between the government and environmental agencies to develop all-inclusive environmental regulation programs. Another option is to seek assistance from foreign entities for funds and environmental expertise.

Pakistan must also realistically restore diplomatic ties with India, at least to the extent of a general climate change consensus. India also signed the Paris Climate Change Agreement, and both states should collectively address the possibility of opening up borders and refugee camps for Pakistanis displaced by natural disasters.

Pakistan’s recent signature in the Paris Climate Change Agreement shows some progress toward combating climate change, but Pakistan must set its own target for reducing emissions and update that mark every year.  The evidence shows that if Pakistan does not make climate change a priority for national security, an environmental butterfly effect will shake the nation’s political, economic and social standing.

Erum Jaffrey is a junior International Relations major at the University of Southern California. Erum has experience working in film, radio and television and hopes to bring a voice for underrepresented minority women in the news media. She is passionate about South Asian and Middle Eastern diaspora studies, human rights, and female empowerment. On campus, you can see her working behind the scenes at Annenberg TV News, writing for the Daily Trojan, or editing the Social Justice Review. She hopes to travel and report as an international news correspondent in the future.