Trending:
You are at:Home»Regions»Europe»The Baltics are Bad at Chess
By Andre Gray on September 18, 2015 Europe, Op-Ed, Politics and Governance 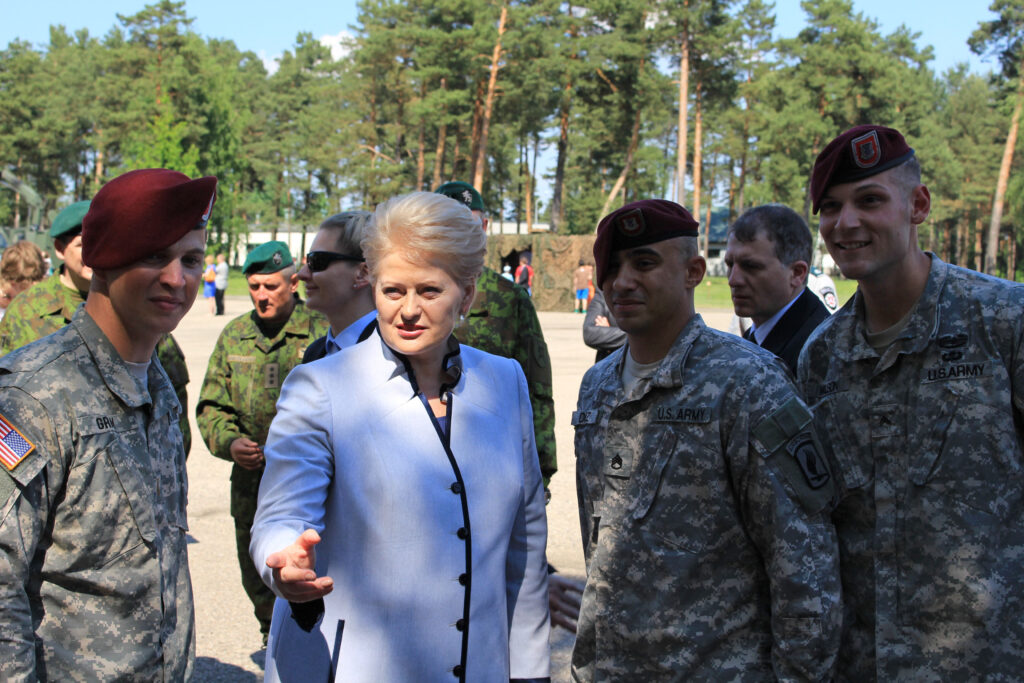 Lithuanian President Dalia Grybauskaite with US army troops in one of the Baltics’ large and frequent NATO drills. May 23, 2014 (US Army Europe Images/Flickr)

“The entire issue is legally absurd,” snorted the Estonian foreign minister earlier this summer, when Russia announced intentions to review the legality of granting independence to the Baltic states of Estonia, Latvia and Lithuania back in 1991. In view of the more general thumb biting that has characterized Baltic-Russian relations in the last years, this latest move by Russia can seem almost tiresomely ignorant—uninspired, even.  It flies in the face of an independence hard won, which involved both Baltic blood and the heroic efforts of Russia’s own Boris Yeltsin to bring peace after Gorbachev’s crackdown on protestors. But the ethos Russia’s legal symbolism evokes – an uncomfortable blend of reckless chiding and deeply-grounded animosity – is telling of the precipitous state of Baltic-Russian relations, and the stressful liability it poses for the rest of the EU.

The post-Crimea relationship between the former Soviet Baltic region and the Russian Federation is a drama of sociology and resources. In a sentence, large Russian minorities – as much as 25% of the population in Estonia and Lithuania – render the Baltics insecure and drive them to anxiety in the face of Putin’s military drills, while continued dependence on Russian energy pins the Baltics to their former Soviet occupiers.

But the picture is more complex in focus, and while the Baltics seem the undeniable victims, the reality is that the region hasn’t made enough of an effort to patch up their vulnerabilities to Russia. Take Estonia. Furthest north in both geography and anti-Russian sentiment, Estonia has done little to integrate the mass of Russian immigrants still left stranded with “undetermined citizenship” over twenty years after the independence movement. Even after the government publically acknowledged the 500,000 newly-made foreigners as a social problem, integration plans have been unaccommodating, focusing almost entirely on teaching the Estonian language – notoriously difficult for Indo-Europeans given its unfamiliar Finno-Urgic origins – instead of the broader socioeconomic inequalities. Industrial counties like Ida-Virumaa in the northeast, almost completely composed of Russian speaking workers, regularly suffer unemployment rates twice as high as Estonian-dominated regions. Along with higher rates of death and depression, Estonian Russians have also been plagued by a dramatic increase in HIV infections and heroin addiction spreading along the Russian border, with young Russian males being the most vulnerable group.

These gaps in the standard of living translate into political animosity. Estonia’s political landscape is split between populist right parties unsympathetic to the Russian minority, and pro-Russian leftist parties, often with links to Moscow. The largest party on the pro-Russian side – the Central Party, winning second-most votes in elections last February – is led by Tallinn mayor Edgar Savisaar, who is reported to have close ties with Putin. Though the majority of Estonian Russians have no interest in rejoining with Russia, they often still vote for pro-Putin groups because of their concern for immigrant conditions and welfare. And because Estonia doesn’t offer any Russian language television, Estonian Russians regularly turn to the channels of Moscow’s propaganda machine for their news and programming, which inevitably feeds sympathy for Putin’s aggression. Thus many Estonian Russians become radicalized, not from deep-seated resentment of Estonia, but from a lack of alternatives. In response, populist right parties like Estonia’s Reform Party up their nationalist, pro-NATO rhetoric to exploit Estonian fears. One of the Reform Party’s campaign clips in the last election featured NATO fighter jets in the background.

The same pattern can be seen in Latvia, where the National Alliance of All for Latvia, a xenophobic, nationalistic party, doubled its popularity in 2010 and was able to join a three-party government coalition. Independent political-risk and Russia expert Agnia Grigas describes the trend in defensive terms:

The correlation between the sizable numbers of Russian speakers in Estonia and Latvia and the prevalence of rightist ideology in the political system is notable. Arguably, the sense of vulnerability felt by ethnic Estonians and Latvians who claim, at times, to feel like a minority in their own country encourages more conservative and nationalist ideological leanings.1

For the EU, the stark and aggressive political climate in the Baltic encourages unconstructive provocations and bear-prodding. In late February, NATO showed off 140 pieces of heavy artillery in the Estonian town of Narva, 300 meters from the Russian border. In May, NATO carried out ten days of military drills near the Russian border in Estonia. The parade involved NATO tanks and 13,000 Estonian troops.

Praise the Baltics for their brash resolve, but remember that all their gesturing happens under the specter of a near absolute dependence on Russia for natural gas. All three countries have made efforts to wean off this pipeline vulnerability. On the frontlines is Lithuania, having heeded the EU’s calls for energy diversity by constructing a floating liquefied natural gas (LNG) terminal at Klaipeda that will import gas from non-Russian sources. Estonia has announced that it too will build an LNG terminal, and Latvia has plans to construct pipelines connecting the Baltic region to its large gas storage facilities, which can hold enough natural gas to protect against a temporary Russian cutoff or price hike.

But these efforts are meager in comparison to Russia’s reach. Where once the Baltic-Russian energy relationship was symbiotic, Moscow has gradually weaned itself off Baltic reliance through pipelines like Nord Stream that bypass the region. Russia’s Gazprom has been able to acquire 47% of the major Estonian gas provider Eetsi Gaas, either directly or through partner firms. In Latvia, Russian business interests pervade, and governmental corruption has allowed energy companies to lobby for favorable policies towards Russian gas, including privatization of the national gas company. Though Estonia is markedly less corrupt, the above mentioned mayor of Tallinn, Savisaar, was at the center of a 2011 scandal when it was discovered he had received €1.5 million from the head of Russian Railways to fund his party’s campaign. The Baltic business and political sphere is full of individuals of a similar background, former members of the Soviet nomenklatura, communist administrators that often still enjoy close relations with Moscow. Media is involved too. The Lithuanian National Security and Defense Committee revealed in 2007 that Russian gas distributor Dujotekana had paid major Lithuanian newspapers ʻLietuvos rytasʼ and ʻRespublikaʼ to keep quiet on links between the company and the Lithuanian Internal Security Department.2

Though the new LNG terminals are promising, the price of gas is much higher than the comparably cheap Gazprom product, leading Lithuania to consider new taxes to support its LNG facility. Meanwhile, Russian naval forces are chasing and stopping Lithuanian ships trying to lay the NordBalt electricity cables meant to integrate the Baltic electricity market and leave the Russian grid. And the EU isn’t helping. Further diversification of energy sources has been hindered by EU environmental measures limiting the production of shale gas – involved in 90% of Estonia’s energy production – and the development of nuclear power, once a major component of Lithuania’s energy basket. In the end, dependence on Russian gas is alive, well and deeply entrenched.

In April, the European Commission concluded an antitrust case against Gazprom, strongly lobbied for by Baltic States accusing Russia of unfair gas pricing. Gazprom was found guilty, and faces up to $10 billion in fines. Regardless of whether or not the case is legitimate, it’s certainly combative. And just like the renewed NATO drills on the border, it’s a stone in a glass house. As it stands, when Putin decries the treatment of ethnic Russians in Estonia and Latvia, he has socioeconomic statistics on his side. Estonia and Latvia’s non-citizen, unemployed Russian minorities are a form of untreated internal bleeding that continues to divide and radicalize the politics. Refusing to ease inequalities and the path to citizenship feeds the nationalist line of Putin’s reasoning. By failing to deal with internal, Russian-backed corruption and shying from the search for alternative fuel sources, both the Baltics and the EU at large leave a glaring hole in their defenses against Russia. It’s easy to play victim and insist on NATO tank patrols, but true security in the Baltics will only come from an appreciation for and confrontation of the depth at which Russian influence pervades the socioeconomic and political scene—the chess of the thing.