While most of the world has their eyes fixed on the crisis in Crimea, a Balkan nation southwest of Ukraine is currently experiencing one of the most tense and transformative moments in its short history as a nation. That country is Bosnia and Herzegovina (BiH), which holds ethnic and political tensions that mimic those in Ukraine.

BiH formed out of the Bosnian War, a civil war in which hundreds of thousands of people were killed due to ethnic intolerance between Serbs, Bosnians and Croats after the nation declared independence from Yugoslavia in 1992. That 3-year war severed the nation in half—literally. The country now has two wholly independent and decentralized governments operating within its borders, that of the Federation of Bosnia and Herzegovina (FBiH) and of Republika Srpska (RS), each with its own parliament, president and flag. However, they compose, in the eyes of the international community, one state.

Ethnic Bosnians and a minority Croat population reside in FBiH, while a Serbian majority lives in RS under the notoriously corrupt, yet popular, president, Milorad Dodik. The two entities have been in a perpetual struggle as both try to recover from their bloody civil war and the economic downturn of the 2000’s. In fact, BiH is one of the poorest countries in Europe and has one of the highest unemployment rates in the Western world. The dire economic situation is not, however, the most troubling aspect of BiH. The ethnic divisions and the ensuing political turmoil are of greater concern to Europeans and the West more broadly. 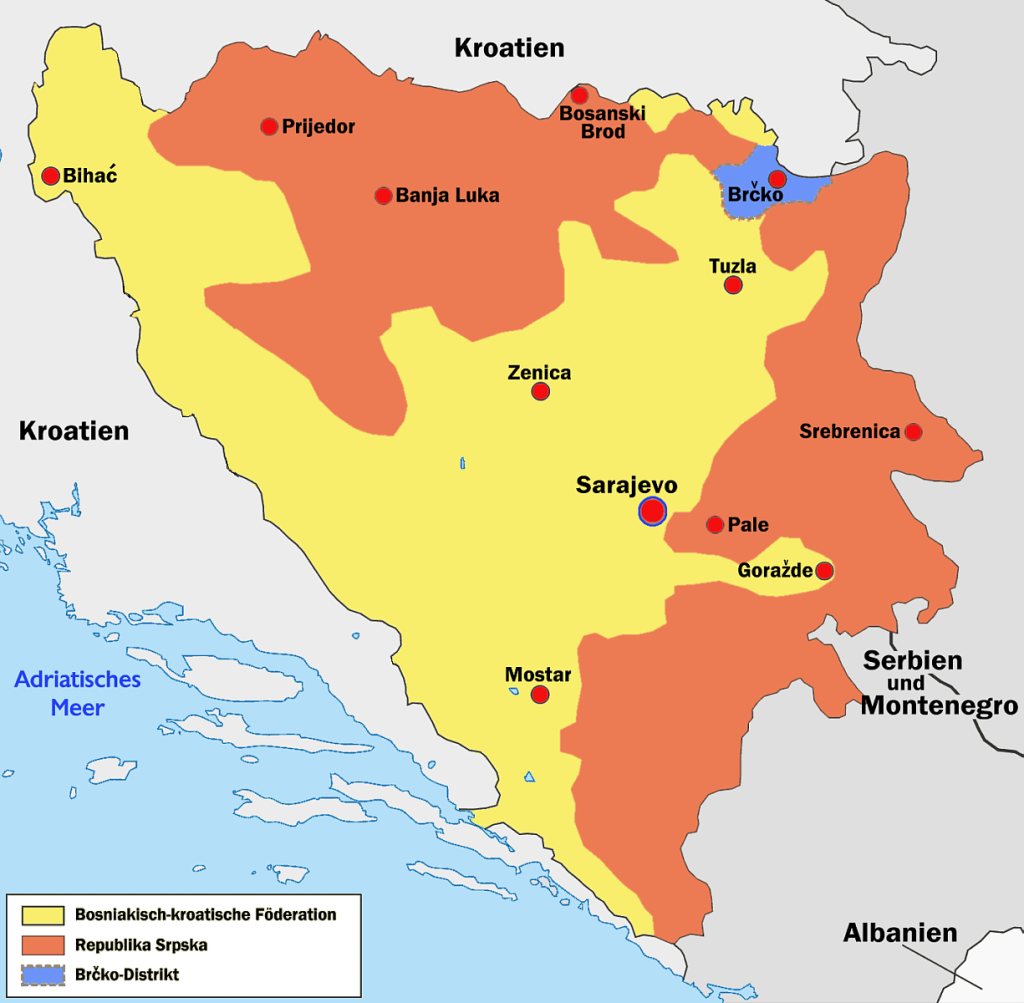 Although the Dayton Peace Agreement – the treaty that ended the Bosnian War – was designed to alleviate tensions in BiH by allowing the two governments to work together while maintaining at least some form of autonomy, the treaty did little to resolve the ethnic tensions that have plagued Eastern Europe for centuries. During the war, Bosnian Serbs under Ratko Mladic systematically killed thousands of Muslim men in Srebrenica, a tragedy painfully remembered by Muslims in the region. Dodik, however, despite Mladic’s trial in the International Criminal Tribunal for the former Yugoslavia, has not expressed regret for his war crimes.

Instead, he has only increased divisions between the various ethnic groups by campaigning for RS’s independence from BiH. Dodik and his party, the Alliance of Independent Social Democrats, have loudly touted the superiority of RS and its Serbs, claiming that “Bosnia is a rotten country” that doesn’t deserve to exist. Many Bosnian Serbs sympathize with him, too. A growing percentage of Serbs have expressed desire to separate from FBiH, probably due to the desperate economic times and the government’s wasteful use of money, but also because Dodik has intensified the talks of independence.

Unsurprisingly, Dodik’s words have made leaders in FBiH and other onlookers uneasy. The delicate system established by the Dayton Peace Agreement looks to be crumbling, with the ethnic tensions encouraged by Dodik evermore reminiscent of those that triggered the Bosnian War. Eastern Europe has had its fair share of political turmoil in recent months. Ukraine has demonstrated just how difficult and harmful political unrest in a poor Eastern European state can be, especially when ethnicity is a main point of contention. While BiH certainly does not have the political power, population, or resources of Ukraine, the conflict is still extremely significant to Western nations and warrants the concern of their leaders. 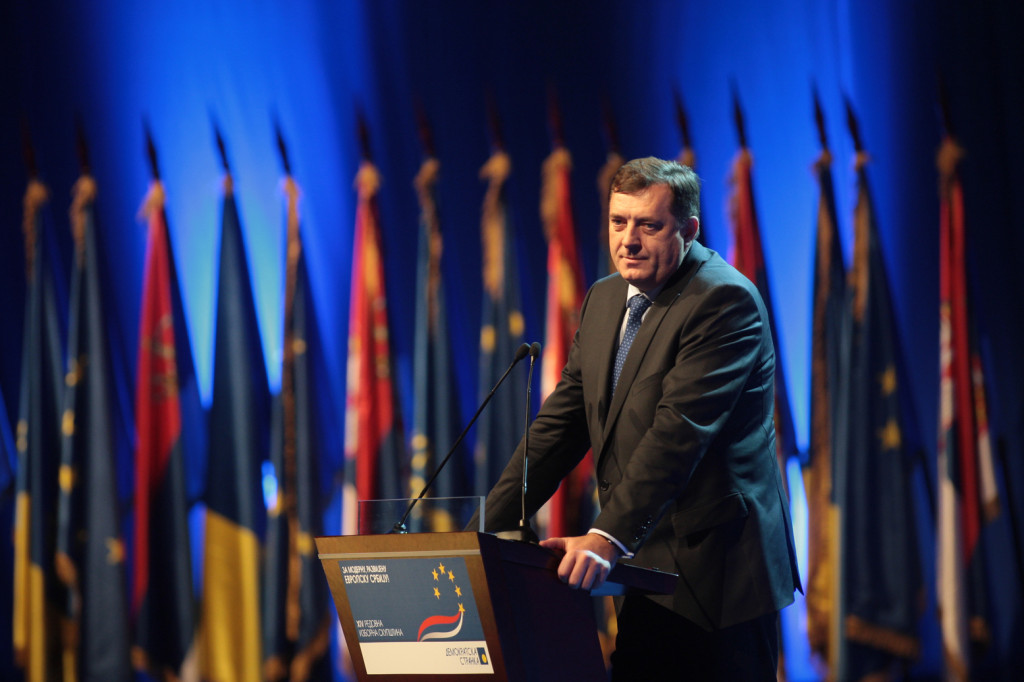 Milorad Dodik, the president of Republika Srpska, has a radical agenda to separate Republika Srpska from Bosnia and Herzegovina. December 18, 2010. (BokicaK/Wikimedia Commons)

But why should those in the West be concerned about a poor and small state like BiH? The answer is simple – Russia. Putin has long been a supporter of RS, while organizations like the European Union and NATO have continually encouraged unity within BiH. Leaders in FBiH often push for BiH’s acceptance into NATO but the RS government always resists, an unsurprising fact considering Putin’s strong distaste for the organization.

If Dodik wants independence for RS, then he has found the appropriate ally. Putin’s encouragement of Crimea’s secession, through rhetoric and military engagement, indicates that he is willing to go against international law and help those who support his same interests. RS is explicitly anti-NATO, an organization Dodik calls corrupt – which is ironic because he has continually attempted to bribe its member states – and emphasizes the ethnic differences among Serbs and Bosnians. Putin is apparently very sympathetic to ethnic separatist groups, so it seems likely that he will endorse RS’s efforts if it does fight for independence.

The implications for Western Europe are numerous. If leaders in FBiH call for NATO military assistance, which does looks like a possibility, then the West will face an important decision: leave BiH alone, a mistake made during the Bosnian War, or fight a Russian ally.  Putin’s influence will only spread and his desire to form an anti-NATO group will strengthen.

With Scotland’s vote on independence yesterday and the situation in Ukraine more volatile than ever, Dodik’s efforts come at a critical time. Hopefully, Dodik will introduce more peaceful arrangements or be voted out of office before conflict strikes Eastern Europe again. BiH, its people and the European community cannot risk nor afford another Bosnian War.