Trending:
You are at:Home»Features»Op-Ed»Kill Boris: The Murder of a Political Dissident
By Kshitij Kumar on April 29, 2015 Op-Ed, Politics and Governance, Russia and Central Asia 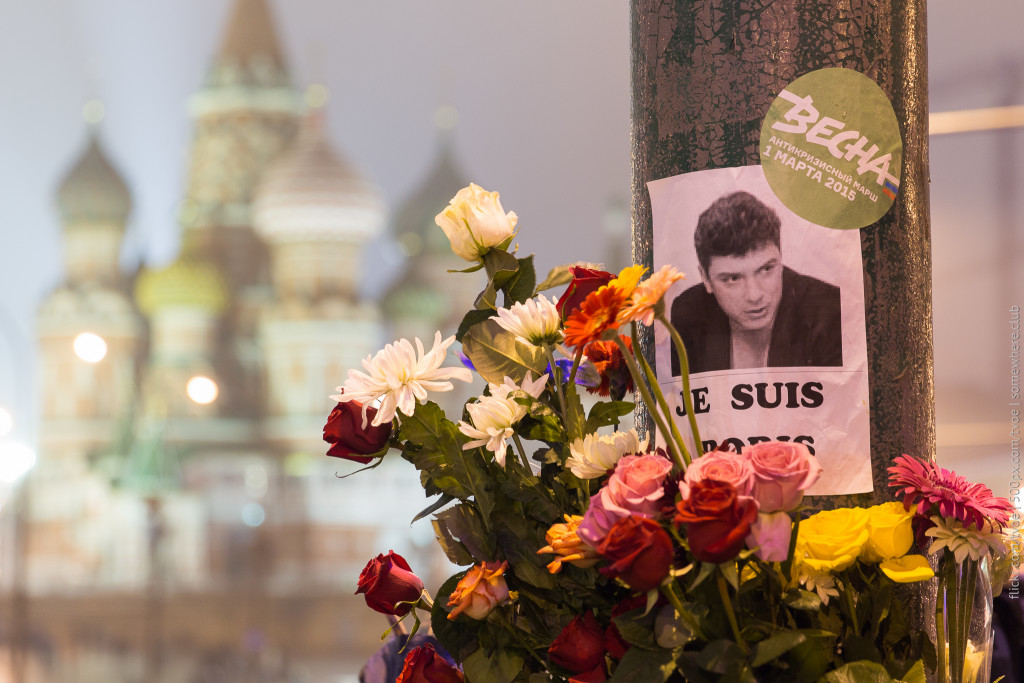 A small memorial for Boris Nemtsov, killed at 55 in sight of the Kremlin at the end of February. St. Basil’s Cathedral is visible in the background. February 28, 2015. (Jay/Creative Commons)

There are hundreds of ways to kill a man. It can be done quietly: radioactive or organic poisons; a knife between the ribs; asphyxiation by strangulation. It can also be done loudly, with four bullets in the back, in front of the victim’s girlfriend and in sight of the Kremlin. Clearly, Boris Nemtsov’s February 27 murder was not meant to be quiet.

Who was Nemtsov and who shot him?

As a liberal minority opposition leader to Putin’s United Russia Party, Boris did not have a massive following in the country. Strongly against the war in Ukraine, Nemtsov even called an anti-war rally in both a blog post and a radio interview just hours before his death. Like any political figure, he was aware that his opinions, even without a substantial readership, created enemies. His anti-Putin sentiment was so pronounced that he eerily anticipated his own grisly demise at the ex-KGB chief’s hands.

Still, Putin did not pull the trigger on the night of February 27. Of the six individuals thought to be involved in the shooting, two are prime suspects. One of the prime suspects, Zaur Dadayev, is an ex-police officer and a “pious Muslim” who was supposedly angered by Nemtsov’s defense of Charlie Hebdo, according to the Chechen leader, Ramzan Kadyrov (a Putin ally). The other four were suspected accomplices. Of the four, only three are still alive; Bislan Shavanov tossed a grenade at the police who arrived to arrest him at his apartment hideout and used a second one to commit suicide. What might he have had to hide?

Could the murder have been gang related?

There are as many registered guns in Russia as there are in the famously anti-gun United Kingdom: ordinary citizens typically cannot carry out murders of high-profile politicians. Most guns that do not belong to police or military figures are illicitly held in gang arsenals. Furthermore, all six suspects were ethnic Chechens, reason enough for suspicion; of Moscow’s six most active and powerful gangs, half are Chechen. Given the suspects’ ethnic background and the nature of the killing, the probability of their membership in a gang is fairly high. And, when all of these gangs seem to be run like modern businesses in search of profit, a contract killing is as likely as any other business agreement.

Who ordered the hit?

If we assume that a gang carried out the killing, then the real question concerns the identity of the individual behind the metaphorical trigger. According to experts, Russian gangs only carry out high profile hits with approval from the Kremlin, suggesting a minimum of four parties involved in such dealings: the target, the hitman, the financier and the government figure. The notion that the government ordered the contract is not without precedent. Other killings have been carried out in a similar fashion, including those of Anna Politkovskaya, Anastasia Baburova and Stanislav Markelov, and Natalya Estemirova, to name a few. At least one of these murders (Politkovskaya’s) has explicit ties to Russian government.

Perhaps this is why it sounds so odd when Putin himself suggests that Nemtsov was a hired kill. The Western media has not hesitated to accuse the Russian president. His culpability certainly cannot be ruled out; however, let’s first consider alternative motivations. (1) It might have been rogue foreign agents, as Putin suggested. The message: Nemtsov was killed to destabilize the country, frame Putin/the Kremlin and show that everyone is vulnerable. (2) It may have actually been motivated by anger against Nemtsov’s support for Charlie Hebdo, as suggested by the Kadyrov. The message: anti-Islamic information, even satire, will not be taken lightly, no matter who you are. (3) It may have been pro-Ukrainian War agents, literally firing back at the staunchly anti-war Nemtsov who was soon to lead a rally protesting the ongoing military campaign. The message: the war will go on until the goals are met and Nemtsov – or anyone else – will not stand in the way. (4) It could have been Putin indirectly. The president went as far as to label political dissent as treasonous in his speeches, which could have led any hyper-nationalistic citizen to choose to do his “duty” and eliminate critics of the state like Nemtsov. The message: dissent will not be tolerated. If either Kadyrov or a rogue citizen was responsible for the murder, we may begin to see a picture of Russia in which Putin’s use of dangerous rhetoric and political alliances has cost him control of the very machinery he once created to gather his power. Even if he was not opposed to the killing, a lack of control suggests that he did not give the green light himself. His words, which could have easily been just political rhetoric, may have influenced vigilantism; his alliances, intended for personal gain, may have bolstered some egos more than desired.

Revenge and silencing political dissent fit the cost-benefit equation for each of the actors suggested above. By hiring contract killers, the financiers/green lights have lost nothing but money (as far we know). They’ve certainly gained one dead politician, whose passing must have sufficient political value to cover the monetary cost of the contract. The one potential culprit for whom Nemtsov’s death doesn’t quite fit the equation is Vladimir Putin himself—at least at face value.

Could Putin be directly responsible?

While Nemtsov was certainly a vociferous critic, he lacked a large following and was definitely not hurting Putin’s current 86% approval rating in Russia. Though it seems irrational to loudly kill a (seemingly) harmless critic and invite the blame of the international community, Putin could have still wished to convey that opposition figures ought to quiet down. But this hasn’t exactly worked historically. Critics seem to only have multiplied, so there’s always been a new mole to whack down.

If it was indeed Putin directly behind the murder, I do not believe silencing dissent was his direct intention. Instead, the message I hear is: I had Nemtsov killed, because I could and because I can. Putin is the young schoolboy in the yard who loudly and sadistically stomps on an insect purely to demonstrate that it is within his power. He does it to show that he remains virtually unaffected. The fingers pointed at Putin are of no real consequence; he is not going anywhere.

Whichever message is the correct one, all paint a worrying picture of the political climate in Russia. That Putin, formerly chief of the Soviet intelligence service, himself suggested that it was a contract killing logically means that an honest and transparent investigation should turn up the legitimate financier/green light. However, if Putin was in control of the murder, any investigation is likely to be thwarted by his power and influence, a fact of which he is well aware. His suggestion is a challenge: prove that I did it. I dare you.

Whether such an honest investigation is currently, or will ever be underway is unknowable. Ukrainian leader Poroshenko stated one of the few things we do know: Boris Nemtsov’s death was no accident. That, perhaps, is the most concerning message of all.