Trending:
You are at:Home»Regions»Americas»Historical Spotlight: Adams’s Thoughts on Government
By Jeff Grimes on November 14, 2014 Americas, Creative, Op-Ed, Politics and Governance 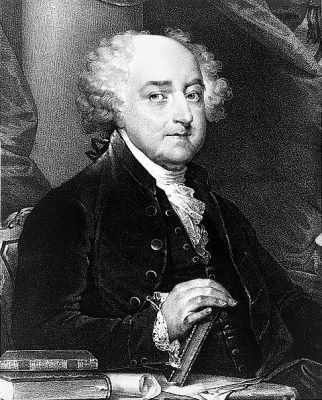 In the spring of 1776, the American Revolution was still in its infancy. It had been just over a year since a decade of British grievances against the citizens of the American colonies had exploded into actual warfare at the Battles of Lexington and Concord. Thomas Paine had just published his now-famous pamphlet Common Sense in January, and the leaders of colonies such as Massachusetts, Virginia and North Carolina were beginning to think about how they wanted to frame their own governments.

In April, the North Carolina Provincial Congress, one of several unicameral legislative bodies formed by the people of North Carolina, passed a resolution that asked for Adams’s suggestions on the establishment of a new government and the drafting of a constitution for the colony. In response, Adams penned a letter to James Warren, his friend on the Provincial Congress, entitled: “Thoughts on Government: Applicable to the Present State of the American Colonies. In a Letter from a Gentleman to His Friend.”

The letter, which would later be widely published across the colonies as a pamphlet, became known as “Thoughts on Government” and would have a significant influence on the framers of state constitutions in New York, New Jersey, Massachusetts and Virginia. Adams’s ideas would also influence the American Constitution itself.

Adams began the letter by demonstrating his enthusiasm for the formulation of government structure: “the divine science of politics is the science of social happiness, and the blessings of society depend entirely on the constitutions of government.”

Adams then entered into a counter-proposal to the idea of a unicameral government proposed by Thomas Paine in Common Sense. Adams wrote frequently, and often heatedly, against Paine on this subject. While the majority of Americans originally agreed with Paine that the legislature should have just one chamber (for instance, New York colonists once burned 1,500 anti-Common Sense pamphlets), Adams’s ideas ultimately prevailed in the Constitution, which established both the House and the Senate. Adams wrote: “a single Assembly is apt to be avaricious, and in time will not scruple to exempt itself from burdens which it will lay, without compunction, on its constituents.”

Perhaps the most powerful defense of the bicameral legislature, and the necessity of frequent elections, was Adams’s point that a single assembly may eventually vote itself perpetual. In this sense, he borrowed from Montesquieu in arguing for a fundamental separation of powers. The argument, later made apparent to all Americans by George Washington when he voluntarily stepped down from the presidency, would become a cornerstone of the Constitution.

Adams next stated his belief that state positions such as Governor, Lieutenant Governor, Secretary and Treasurer should be chosen via joint ballot by both legislative bodies. He argued that these elections should be annual: “where annual elections end, there slavery begins.”

He ended Thoughts with a statement that can be interpreted as nothing but pure passion for the formation of a virtuous government:

“You and I, my dear friend, have been sent into life at a time when the greatest law-givers of antiquity would have wished to have lived. How few of the human race have ever enjoyed an opportunity of making an election of government more than of air, soil, or climate, for themselves or their children.”

Adams, in Thoughts, provided a vision for a republican government that would inspire the creation of numerous state governments and ultimately the Constitution. I believe that this document is worth revisiting for three reasons. First, it is one of the most concise and powerful pieces written by our Founders about the principles upon which the United States was founded. Second, we tend to prioritize classical works by Plato, Aristotle, Machiavelli, Hobbes, Locke, Montesquieu and Rousseau as Constitutional blueprints, missing some contemporary works that had a more immediate effect on our Founding Fathers. Perhaps this prioritization is justified, but Adams cannot be overlooked as one of the most learned and thoughtful among the Founders. Thoughts is the distillation of his political thinking.

Third, and most importantly, the simple ideas outlined in Thoughts can explain much of what will happen over the next two years in the US Congress in light of the midterm election results. The GOP’s victory breathed hope into the potential White House bids of Republicans Jeb Bush, Rand Paul, Chris Christie, Marco Rubio and Ted Cruz. These conservative thought leaders, while differing slightly in their vision of what challenges will be most important leading up to 2016, agree that liberty in the classical sense must be the focal point for the new Senate majority.

In his speech on victory night, Rand warned that if the President vetoes Republican bills too frequently, “in 2016 the people will rise up and reclaim our heritage and elect a lover of liberty who will restore the values of our founding fathers.” Jeb Bush made similar remarks about the importance of effective governance given that the GOP won’t have a filibuster-proof majority in the Senate.

Adams was similar to other Founders in his equation of liberty and happiness. He wrote in Thoughts that “the form of government which communicates ease, comfort, security, or, in one word, happiness, to the greatest number of persons, and in the greatest degree, is the best.” These principles, simple as they are, evoke a bygone era in which the ideals of liberty were not so conflated with political jockeying. Both parties would be wise to remember that during the next two years.