Trending:
You are at:Home»Regions»Americas»Beyond Brexit : A Rising Tide of Isolationism
By Katya Lopatko on August 16, 2016 Americas, Europe, Op-Ed, Politics and Governance

On Friday, June 24, the world woke up in an alternate reality. The unthinkable had happened: overnight, one of the European Union’s most influential members had voted to turn its back on the world’s leading institution for transnational cooperation, a bastion of economic liberalism, political unity and socially progressive values. But the prevailing sentiments that drove Brexit are not contained in Britain alone; rather, this event is just one manifestation of larger trends sweeping the West. In it, we see the prediction Eurasia group—a top political risk consultancy—made at the outset of 2016 ringing eerily true: that this year will witness a reemerging “identity crisis between open Europe and closed Europe.” From controversy over free trade to anxiety about terrorism, more and more of the countries responsible for driving globalization are beginning to fold inward.

The end of European integration?

While today we often take the close friendship between European nations for granted, in reality it is an astonishing feat considering the region’s bloody history. Only since World War II have European leaders begun to view each other as allies by virtue of shared heritage and values, rather than enemies vying for influence and territory. The foundation of the European Coal and Steel Community in 1950 set Europe on a trajectory of increasing unity, exemplified by the Common Market and later the European Union. Removing trade barriers between countries was instrumental in allowing Europe to rebuild after the destruction of the war and sustain impressive growth for decades: in the second half of the twentieth century, GDP per capita tripled while average hours worked fell by a third as goods, services, money and people moved freely throughout the continent. Beyond the tangible economic measures, such increasing interconnectedness no doubt contributed to preserving the longest stretch of peace in European history.

Because the image of a tolerant, peacekeeping and socialist-leaning Europe has grown so entrenched, it is easy to forget this is a relatively recent phenomenon. Far from a permanent fixture, these values reflect an ideology specific to a time in history, one that is on the decline in Europe today. The Brexit vote reflects a public opinion shift away from internationalism, not just in Britain but to varying degrees across the continent.  According to recent surveys, favorable views of the EU have dropped in each of the seven EU countries surveyed since 2004; in Greece, France, Spain and the UK, a higher percentage of respondents expressed a negative attitude toward the EU over a positive one. While part of this discontent can be attributed to dissatisfaction over the EU’s handling of issues like the economic and migrant crises, it is also importantly indicative of a general questioning of the necessity of such a close union between European countries – whether the EU actually helps Europeans address today’s most pressing problems.

Some dissatisfaction with the EU can be attributed to economic issues, especially in countries on the receiving end of the EU’s controversial monetary policy and forced austerity after the Eurozone financial crises. Greece unsurprisingly has the highest rate of disapproval of EU economic policy (92%), though wealthier economies like Germany also harbor discontent over being forced to finance bailout after bailout to keep the euro healthy. Such realities call into question the trade and currency integration that are the foundation for the EU: while the Common Market has no doubt bolstered the post-war European economy, backlash against the financial obligations of EU membership formed part of the driving force of Brexit. Despite the fact that the British economy has no doubt taken a hit in the aftermath of the ‘Leave’ vote, the decision nonetheless shows Europeans feeling more burdened than bolstered by economic integration, and beginning to envision a future outside of the Common Market. 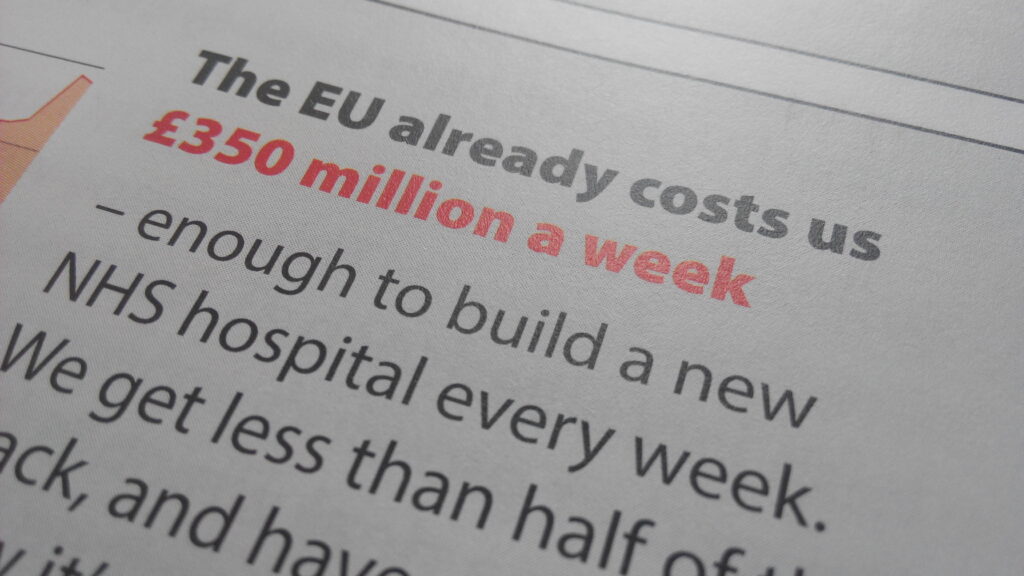 Pro-Brexit headlines cite huge economic burdens as one of the main reasons to leave the EU. 2016. (Abi Begum/Flickr)

Beyond economics, much discontent with the EU links to social tensions. Again, Eurasia Group’s 2016 prediction holds true: “a combination of inequality, refugees, terrorism, and grassroots political pressures pose a fundamental challenge to [EU] principles.” With an overwhelming majority of Europeans unhappy with the EU’s handling of refugees, many question the freedom of movement policy central to the EU model. A recent Pew Global poll reveals that collectively, Europeans view ISIL as their single greatest threat, a fear obviously related to the string of terrorist attacks linked to the radical Islamist group over the past several years. But instead of turning to the EU as a resource of collective defense, many believe that the solution lies in strengthening national borders; in most countries polled, the majority agreed that accepting more refugees will increase the likelihood of terrorist attacks at home.

This view tends to translate into isolationist, anti-EU sentiment. In most countries, the majority favors some return of power to national governments and maintains that countries should deal with their own problems before helping others with theirs. In the words of Ian Bremmer of Eurasia Group, the emerging “closed Europe” is one that “closes itself to the outside world, and whose countries close themselves up to one another.”

This opinion is most prevalent among self-identified conservatives; in the majority of countries surveyed, those who identify politically with the left were significantly more likely to support the EU than right-wing respondents, linking anti-EU sentiment to rising tides of nationalism and  populist politics. From France’s Front National to the Alternative for Germany, many European countries are experiencing recent electoral revivals of far-right parties (detailed visual breakdown here) while the center-left, the traditional stronghold of European politicians, undergoes a decline. Not surprisingly, problems with immigration and terrorism bring out xenophobic tendencies in populations and thus empower nationalistic, reactionary candidates promising to restore safety through the reestablishment the integrity of the nation.

One might imagine fear of the ‘other’ would inspire European unity, especially given the common view that Islamist terrorism represents an attack on the entirety of Western culture. Moreover, it seems clear from the outside that ISIL can only be defeated by a concerted European – and global – effort; it is futile for individual nations to fight a group which indiscriminately hates the West. But as Brexit has illustrated, the impulse to withdraw, isolate and draw up protective barriers proves stronger than this logic.

On the other side of the Atlantic, isolationist sentiment proves just as strong a force in the upcoming US presidential elections. As in Europe, economics and immigration constitute two central issues in the campaign: according to a recent poll, the economy and terrorism are the two topics most widely considered “very important” by 84% and 80% of voters, respectively.

Both the Democratic and Republican nominees have denounced a free trade deal with China as part of their platform, reflecting overwhelming American anxiety about the effects of economic globalization on domestic jobs and prosperity. Even Clinton, an avid supporter of the TPP in the past, has admitted she understands “a lot of Americans have concerns about our trade agreements” and adjusted her platform accordingly. Meanwhile Trump has declared that globalization moves “our jobs, our wealth and our factories to Mexico and overseas.” Even democratic runner-up candidate Bernie Sanders spoke out against opening the US further to global trade.

Such a harmony of opinion on a major issue across parties is remarkable, not least because, despite increasing volatility and competition in some industries, free trade has a wealth-generating effect on economies. Most economists agree that openness to trade in conjunction with smart policy that protects the negatively impacted is the soundest path for growth in today’s globalized economy. A recent US complaint against Chinese export taxes in the WTO illustrates the crucial role that free trade plays in economic prosperity; because key US industries rely on imports of Chinese raw materials, they lobby hard for duty-free imports to remain competitive. 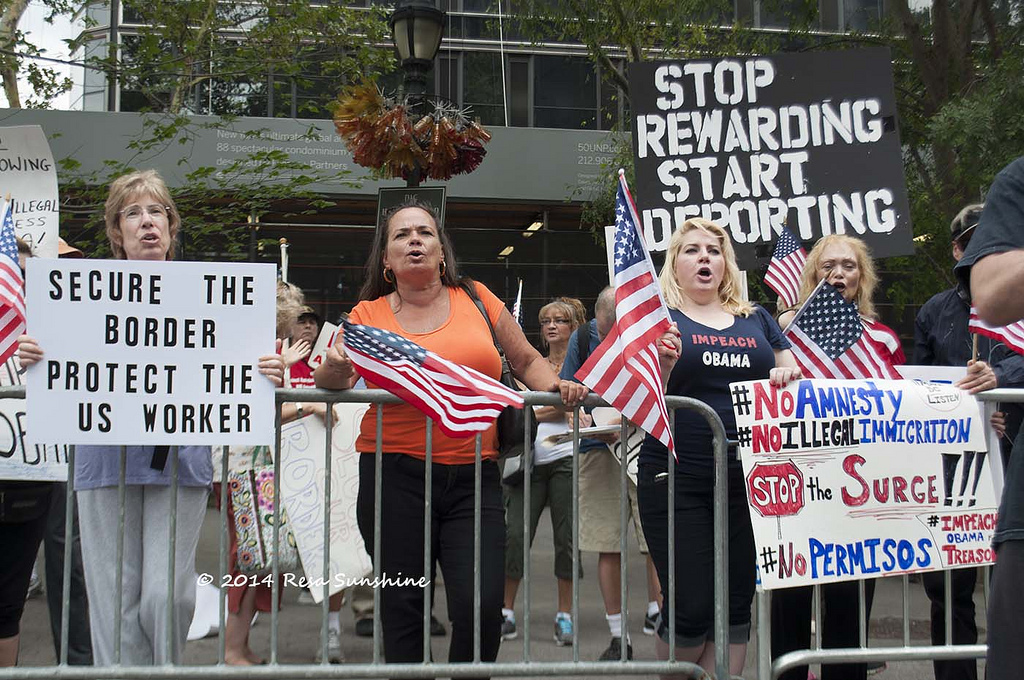 Americans protest immigration at a rally outside the UN in New York. 2014. (A Jones/Flickr).

The near-universal backlash against globalization does not represent a logical solution to economic hardship; economies are too far gone down this path to make turning back a viable option. Rather, it is as an emotional response to a perception that free trade brings predatory competition and benefits big business at the expense of the so-called average American worker. Trump especially serves up globalization as the scapegoat for America’s economic hardships in the same way that he pins social issues on immigration. His loud call for a wall to protect the border is a crude representation of Americans’ greatest fears surrounding race, religion and terrorism, making this opinion impossible to ignore. His proposition to ban all Muslims from entering the country shows that xenophobic fears are on the rise on both sides of the Atlantic.

The verdict on isolationism: understandable but ultimately futile

For better or worse, from European explorers to American imperialism, the West has championed the ascent of globalization. Today, however, attitudes are shifting as Europeans and Americans alike increasingly embrace isolationism as a solution to their economic troubles and security fears. In a world characterized by the ever-heightening volatility of global markets and rising hysteria over ISIL and radical terrorism, it is hardly shocking that more and more people seek protection within their own borders.

Unfortunately, shutting our eyes and borders to the outside world will not resolve any of our ever-growing array of crises. Eventually, this approach will fall through and we will be forced to address problems that only intensify the longer we push them away. Reactionary isolationism will not provide any lasting solutions, just a temporary respite.