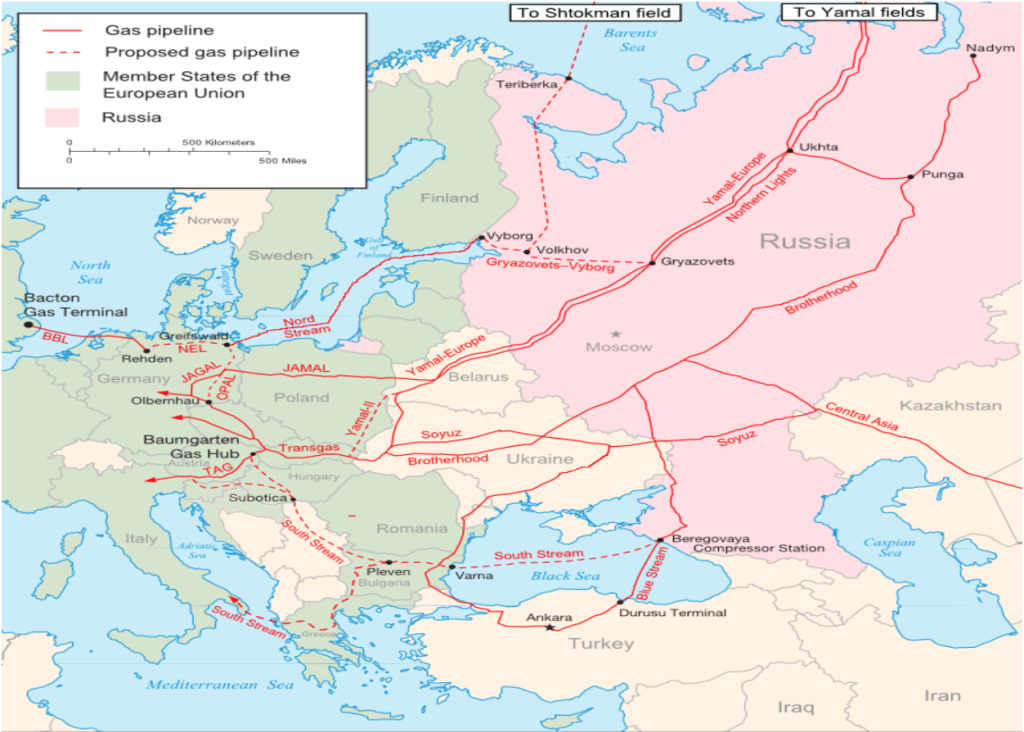 A Map of Existing and Proposed pipelines for supplying Europe with Russian and Central Asian Natural Gas (Wikipedia Commons, 2009).

For all intents and purposes, Vladimir Putin killed the South Stream natural gas pipeline project on December 1st during a joint press conference with Turkish President Recep Tayyip Erdogan. The news made global headlines and rocked the natural gas industry. Putin blamed the European Commission’s legal restraints for making the current plans untenable. Russian state gas monopoly Gazprom would have owned both the primary gas fields and the South Stream pipeline itself, but European regulations prohibit the same corporation from owning and operating such a large amount of the supply chain. Without Gazprom’s involvement, South Stream is now as dead as the once-glorified Nabucco project. Instead, Putin described vague plans to build a new gas hub in Turkey and a new pipeline across the Black Sea. This would allow Russia to control its exports of gas to Turkey but not any further.

South Stream was Russia’s 63 billion cubic meter per year (bcm/year) competitor to the Western-backed Nabucco. The Nabucco pipeline began in 2002 as an ambitious project to bring Caspian and Central Asian natural gas across Turkey and the Balkans to Central Europe, bypassing Russia and diversifying Europe’s gas suppliers. But many potential suppliers were noncommittal, leaving Azerbaijan as the only remaining supplier. Azerbaijan’s Shah Deniz II gas field is projected to have enormous gas reserves, but they would not have been enough to fill Nabucco’s planned capacity. After months of deliberations and revisions to the Nabucco project, Baku shifted its support to the Trans Adriatic Pipeline (TAP) in 2013. It had also completed planning for the Trans Anatolian Pipeline (TANAP) project independently with Turkey in 2012, which will carry 16 bcm/year of gas from Azerbaijan’s Shah Deniz II field to the Turkish border with Greece. There it will transfer gas to the TAP, which will reach the southeast shore of Italy.

The entire European energy policy discourse is rooted in Ukraine; most transport infrastructure and pipelines taking Russian gas to Europe pass through Ukrainian territory. Moscow needs a cooperative government in Kiev for strategic reasons and cannot possibly tolerate NATO or EU institutions existing on its doorstep.[1] One of Russia’s preferred methods of keeping Ukraine close is turning off its gas supplies, as it did in 2009, but that means turning off supplies to other European customers as well. Hence the South Stream and other projects have been developed to bypass Ukraine. For example, the Nord Stream and Yamal pipelines bring Russian gas to Germany. However, they are not enough to replace Ukrainian routes.

I first arrived in Azerbaijan as a language student around the time TAP was finalized. I remember meeting executives from SOCAR (State Oil Company of the Azerbaijan Republic) and noting their excitement about finalizing the gas agreements and their eagerness to get the supplies running. Azerbaijan was always going to develop and profit from its gas reserves one way or another, preferably without sending fuel through Russia, as Kazakhstan and Turkmenistan do. As long as gas made it to Europe somehow, SOCAR would be able to charge non-discounted prices and Baku would profit.

Last week, the Caspian Center for Energy and Environment (CCEE) hosted two events where the planned topics quickly shifted towards discussions about the South Stream’s cancellation. Businessmen, academics, and government representatives from Azerbaijan, Turkey, Greece, Norway, the United States and elsewhere gathered at the Azerbaijan Diplomatic Academy (ADA) for the small but high-level events. The first event’s focus was a presentation on the economics of oil and gas price movements (both products have price elasticity of demand estimates close to zero, making prices highly sensitive to changes in supply) and the second was an in-depth review of Russian political and economic thinking regarding natural gas export strategies.

The notable aspect of the ongoing analysis in Baku is that the Russians are absent from the conversation. Russian diplomats, academics and businessmen frequently visit ADA for various programs, and several Russian students study there. Russians are sometimes present at other international energy-related events here, but no one is asking for Moscow’s opinion right now. Energy policy independence is a priority in Azerbaijan. The end of the South Stream may be bad news for Moscow, but there can be no doubt that the energy industry in Baku now has a sense of reserved excitement. Scrapping South Stream means that European consumers – whose energy demands are increasing – need to look elsewhere. For instance, Hungary is already publicly looking towards Baku as an alternative gas supplier.

At CCEE’s second event, Norwegian analyst Arild Moe brought up the issue of smaller “non-Gazprom producers” or NGPs in Russia that make up a small portion of the gas market. These gas companies have grown substantially, and even did well during the recession. Since Gazprom is a state monopoly, it is responsible for providing cheap gas within Russia. This is an enormous task, and as an inefficient monopolist, Gazprom is happy to hand off some of its domestic supply duties to smaller, efficient operations and focus on its profitable export markets. But according to Moe, these smaller gas producers have grown to the point where they are beginning to explore opportunities for exports as well. He showed graphs comparing the NGPs’ projections of their combined market share with Gazprom’s projections of the total market share held by NGPs. The difference was substantial; Gazprom anticipates NGPs controlling about 15-20% of Russian gas production by 2020, while the NGPs believe they will produce about 35% of Russia’s gas. Some of these NGPs are backed by serious investors including large oil companies like Rosneft, and have large amounts of capital available for investment in new fields and infrastructure. I asked Moe if these NGPs would consider pursuing a smaller pipeline project by themselves to export gas to Europe, such as a link running through the Caucasus or Eastern Black Sea towards TANAP in Turkey. “A few years ago, that would have been unthinkable,” he said, “but now that might not be so far-fetched.”[2] If this were to happen, it would be a sure sign that Gazprom’s monopoly on Russian gas is weakening substantially.

Although the South Stream’s cancellation may come as tentatively good news, Putin also gave some tantalizing details about future plans with Turkey: “…we are ready to not only expand the Blue Stream pipeline, as I just said, but also build another pipeline system in order to cover the growing needs of the Turkish economy.” Gazprom CEO Alexei Miller said in a statement on the same day that Gazprom plans to build a new pipeline directly to Turkey. This will expand gas exports to Turkey by 63 bcm/year, with some 14 bcm/year intended for Turkey and the rest to be transported to the border of Greece. But the consensus in Baku is that a 63 bcm/year pipeline to Turkey is highly unlikely.

During Dr. Ed Hirs’ presentation on oil and gas price fluctuations, the question of such an ambitious project to bring 63 bcm/year to Turkey was brought up. Hirs, an economist who chairs an annual energy conference at Yale, agreed with others that such a project would be commercially and economically unviable for Gazprom since it would be immensely costly.[3] The Turkish economy is strong, but Hirs and others agreed that it would not grow enough to require an additional 14 bcm/year anytime soon. A BP spokesperson said that any new Russian-Turkish pipeline would not affect the TANAP, in which BP holds a large stake. Azerbaijani participants dismissed the Russian claims, projecting that a smaller project with a capacity for 30-35 bcm/year would be more likely. Participants in the event with Dr. Moe also reached this conclusion.

More importantly, there is a business opportunity here for those operating in Baku. Russian gas still needs to go somewhere. It may come from Gazprom or from NGPs in Russia. The Azerbaijani participants in the CCEE conferences often commented that TANAP and TAP could be readily expanded to accommodate 32 bcm/year or more. SOCAR is a major stakeholder in both these projects. If Russian gas companies, seeking profits from Western customers who pay full prices, decide to avoid major capital-intensive projects like South Stream while still avoiding Ukrainian routes, then TANAP and TAP could become the routes of choice.

The idea of Russian gas transiting non-Russian pipelines probably does not sound appealing to the Kremlin right now. But according to some experts such as Dr. Moe, Gazprom’s major gas fields are Soviet legacy fields, which are becoming less productive over time. They will need to make massive investments in developing new fields sooner or later, and with the decreasing prices of energy, the Russian budget is being squeezed. There is also a major capital flight out of Russia due to the Ukrainian crisis. Perhaps building a small link through the Caucasus and paying transit fees to use TANAP and TAP will be more appealing in Moscow than pursuing major pipeline projects, in order to save up for the inevitable exploration and development of new fields. Since TANAP and TAP will be coming online in a few years, SOCAR has time to think and play its cards.

There is also a strategic opportunity here for the West. If Russian gas was reached Europe via an expanded TANAP and TAP, then the life of Azerbaijan’s Shah Deniz II field could be extended significantly; the pipeline could be filled without Shah Deniz II being consistently operated at 100% of its output capacity. If Russia ever found itself in a scenario desiring to shut off exports via TANAP, gas supplies from Azerbaijan could be increased to satisfy some of that demand. A variety of gas suppliers using TANAP and TAP routes would increase European energy security while adding substantially to fees collected by Turkey and Azerbaijan.

Expanding TAP and TANAP could be a windfall: more energy security for Europe, more cash coming into Baku, and another non-Ukrainian route for getting gas from Russian producers to their best European customers. Russia would not have direct control of this pipeline, but that would allow it to focus its investments elsewhere.