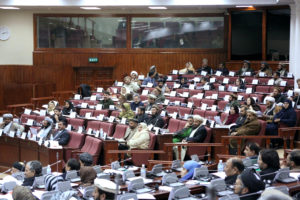 A meeting of the Afghan parliament in 2006. (Ben/USAID / Wikimedia Commons.)

Hopes for political stability in Afghanistan were let down this February with news that another governor of an Afghan province refused to obey President Ashraf Ghani’s order to leave. Although Governor Abdulkarim Khaddam of the Northern Samangan province gave up his office after being offered a position on the country’s negotiating council with the Taliban, this incident is yet more evidence of the Afghan central government’s lack of authority. Another Afghan governor continues to defy a presidential order to leave and is even planning protests across the country. The situation may seem ironic given the expansive constitutional powers of the Afghan president. Yet, the Afghan central government may find the answer for its malaise in its insistence on such far-reaching powers to begin with.

The current Afghan constitution will puzzle those familiar with federal democracies with devolved powers. The 2004 Afghan constitution changed little from past constitutions, which codified a powerful hereditary monarch–it merely placed all previously monarchical powers in the hands of a single elected executive. Today, the Afghan president is responsible for appointing every district chief, provincial governor and police chief in over 400 districts.

While centralizing measures might be taken as a force for stability, they do little to positively change the facts on the ground, where the underlying forces for instability remain: Afghanistan is a multi-ethnic state and an incipient democracy, and the Taliban is holding its ground in its fight with the US-backed government. An opportunistic politician backed by local supporters is unlikely to listen to a central government that is preoccupied with fighting the Taliban. A democracy that has been around in only a semi-stable state for little over a decade is unlikely to command the kind of institutional respect that centuries-old governments do. No matter how codified the powers of the Afghan executive, they will always be limited by how much respect and authority the executive commands.

A centralizing constitution does, however, engender unrest and dissatisfaction by excluding as many as possible from power so that ambitious politicians are left to seek power extralegally. If the Afghan constitution allowed the local election of governors, would-be governors could content themselves with knowing that there is a way to attain power outside the good graces of President Ghani. Of course, a devolution of power wouldn’t change the horse-trading that has defined Afghan politics, but it might create more respect and legitimacy for the rule of law in a country that seems to be facing perennial war.

Some may argue that devolution may embolden local leaders–governors may tighten control over their provinces, turning them into their own fiefdoms, and stronger provinces may seek independence as Iraqi Kurdistan did in a referendum last year. Although tensions in Kurdistan dissipated after a strong response from Baghdad, the referendum led many to fear civil war. If devolution in Afghanistan merely emboldens sectarianism, it will have been a failure.

Fortunately, the case of Iraqi Kurdistan offers a valuable lesson for future devolution efforts: defense should remain a strictly national affair. Kurdistan’s referendum came after Kurdish militias asserted themselves in territory beyond the autonomous region’s de jure reach. An Afghan devolution of power that forbids local militaries and maintains the primacy of the central government would avoid these pitfalls.