Trending:
You are at:Home»Topics»Defense and Security»The Islamic State Enables Assad’s Machinations in Syria
By Justine Breuch on October 21, 2015 Defense and Security, Middle East and North Africa, Op-Ed, Politics and Governance 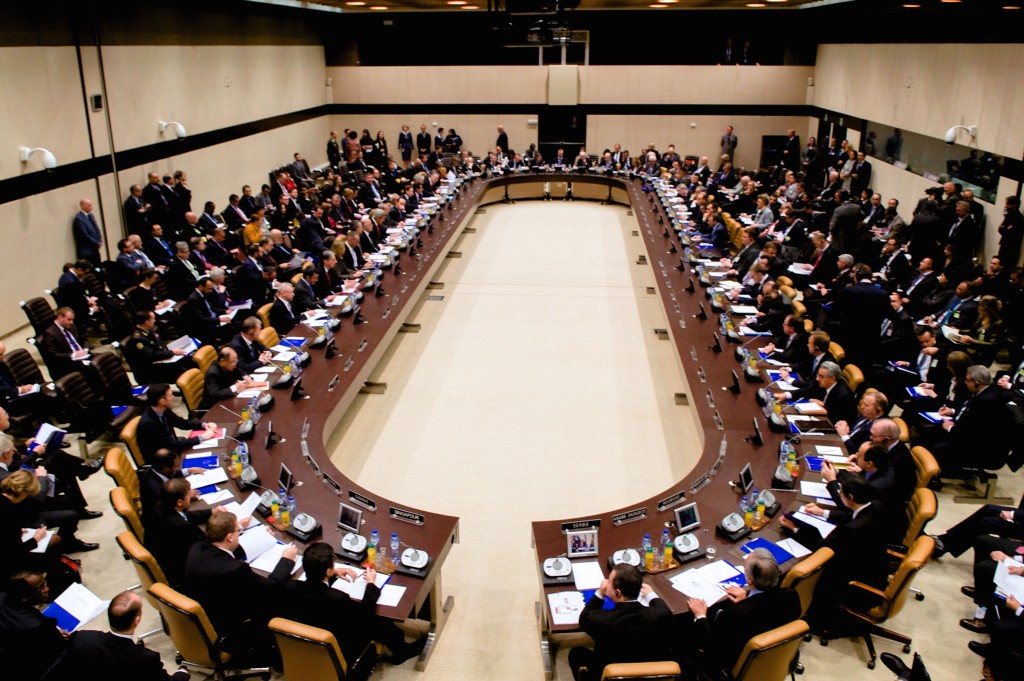 A meeting of more than 60 anti-ISIL coalition parties at NATO Headquarters in Brussels. December 3, 2014.

Though the incessant stream of Islamic State-related headlines have cemented a narrative of IS as the greatest threat to mankind, the numbers seem to belie the reality of our pervasive sense of alarm. In fact, the Assad Regime in Syria has killed more civilians than IS militants have—by a large margin. Since the Syrian Civil War began four years ago, 250,000 people have died in the Syrian conflict, of which only about 5% can be attributed to IS (though no one has exact figures). And yet, Western audiences seem to have directed its collective condemnation and attention within the Middle East almost exclusively to IS, while Assad single-handedly facilitates a massive genocide of Syria’s Sunni Muslims.

The widespread attention makes sense, however, in relation to the extensiveness of media coverage that fetishizes IS’s savagery, debates its “allegiance to Islam” and generally promotes fear to improve ratings without delving into the greater machination at play in Syria. The idea of Westerners traveling to the Middle East to train with IS fighters and returning to the US in order to commit an act of domestic terrorism garners far more views than a far-off war in which barrel bombs kill thousands of people. However, in this way, the public plays into a strategy set by Syrian dictator Bashar al-Assad and ignores a far greater threat.

When the Syrian conflict began in 2011 as a reverberation of the Arab Spring, Bashar al-Assad reacted to the peaceful protests in the same way his father had in 1982, by attacking the opposition into acquiescence. Militarizing the conflict engendered greater hostility and the Free Syrian Army arose as a non-sectarian effort to oust a brutal dictatorship. Seeing the potential power vacuum, jihadist extremists travelled to join the rebels.

Yet, the greatest threat posed by the rebel groups was their diversity—the opposition came from a variety of religious affiliations, ethnicities and political agendas. In a tactful maneuver to sectarianize a unified conflict, Assad freed extremists from jails under the guise of “amnesty” (the Assad regime isn’t exactly a country keen on amnesty for amnesty sake) and then targeted the Sunni-majority in order to draw extremist Sunni support to the opposition and polarize them.  These efforts would alienate potential international allies seeking to oust him from power and augment intra-rebel conflict.

In late 2011, the crisis had become bad enough that the UN Security Council considered a resolution to condemn Assad’s crimes (which has no implication beyond a wag of the finger), yet both Russia and China vetoed it: Russia’s vote a direct defense of Assad and China’s a show of camaraderie to Russia. Both also vetoed another draft in February 2012.

At the time, there were enough Al-Qaeda affiliates and extremists in the region for al-Nusra, the Syrian branch of al-Qaeda, to become a major player in the conflict.

By January 2013, an estimated 60,000 Syrians had already been killed – often with barrel bombs and explosives amid large civilian groupings – with little to no media attention. And while Assad’s chemical attacks against his own people did incite international outrage, the US did not launch any military initiatives against his administration, as was alluded to by President Obama. No one was talking about IS at the time because they didn’t even truly exist—the largest anti-Assad factions were still al-Qaeda and al-Nusra.

Another year later IS emerged: an opposition group attracted to the hotbed of radicalism Assad had intentionally bred. Its extremism, however, inadvertently supported Assad’s agenda—it simultaneously fought rebel groups seeking to oust Assad and cast his regime as a lesser evil.

In fact, defectors of the regime have exposed the role that Assad played in enabling IS: he actually subsidized their expansionary endeavors by purchasing oil from them and militarily tiptoeing around their territory. To this day, Assad has indiscriminately bombed thousands of his own people – rebel and civilian alike – and yet never targeted IS strongholds. According to an analysis of the IHS Jane’s Terrorism and Insurgency Center’s (JTIC) database, of the 982 counter-terrorism operations for the year up through November 21st, only 6% directly targeted IS.

Despite these atrocities, US intervention was limited to non-lethal supplies until an entire year later when IS capturing Mosul, Iraq’s second largest city and executed two American journalists. When the media finally delegated airtime to IS inside Syria, President Obama formally avowed to “degrade and destroy ISIS.” With attention shifting to the ever-increasingly threat of IS, an opportunity arose for Assad to continue to commit atrocities without the vigilant eye and condemnation of the media.

Assad has enabled the most violent extremists to debilitate, polarize and secularize his opposition, while continuing to protect and purchase oil from IS. IS has only killed about 10,000 people across Syria and Iraq to date, whereas Assad had already killed 191,000 Syrians when the group first emerged in September 2014. The media’s focus on IS obfuscates the real source of atrocity. The fallacy of IS as the primary evil-doer in the Middle East fosters a paradox within the US’s foreign policy: while the US seeks to eradicate IS and impede the growth of the Islamic Caliphate, it empowers rebel groups that see Assad as the primary enemy and IS as a tangential conflict. The US wants to focus primarily on IS – not ousting Assad – and yet that isn’t a priority for the rebels that it empowers. These “moderate” groups look to al-Nusra Front and Hezbollah for alliances, both of which the US actually considers terrorist organizations. This is a very happy outcome from Assad’s earlier military calculations—the US has no allies or “good side” with the same priorities.

Not only is the US’s myopic obsession to destroy IS counter-intuitive, it has shifted the world’s gaze away from the Assad Regime towards a group that, while unequivocally brutal, hasn’t committed the atrocities Assad has and continues to. The latest headlines often attribute the millions of refugees fleeing into European nations to the havoc caused by IS (despite disputed claims about whether or not the group is at fault) and undermine the mastermind behind the entire diversion. Blame continues to remain with the US’s favorite enemy—IS. Most problematic about this particular narrative is that it provides an opportunity for Bashar al-Assad, who can now capitalize on the situation by calling for domestic rebel-backing in order to “combat terrorism.”

Furthermore, during the US’s categorical pursuit of IS, Putin has managed to quietly establish an agreement between Russia, Syria, Iraq and Iran under the guise of combatting IS, thus establishing himself in a greater position of influence within the Middle East and challenging the US for supremacy in the region. This comes after Putin deployed tanks into Syria to further bolster the Assad Regime without prior warning. Putin’s campaign on behalf of his ally seemed to culminate in his speech to the UN, in which he called for a united front against IS that would include Syria’s current administration—a plea that directly resisted President Obama’s condemnation of the Syrian Regime and subsequent call for international powers to preserve the international order through diplomacy in the region.

These latest developments will evidently divert more attention to the future of Syria; however, the overarching narrative centers itself around IS and obfuscates the harsher reality. This in no way implies that media outlets should downgrade the atrocities committed by IS—whether it be murder, rape, pillaging or large scale acts of terrorism. However, the narrative should not detract from the larger human rights violations and machinations by the Assad Regime.