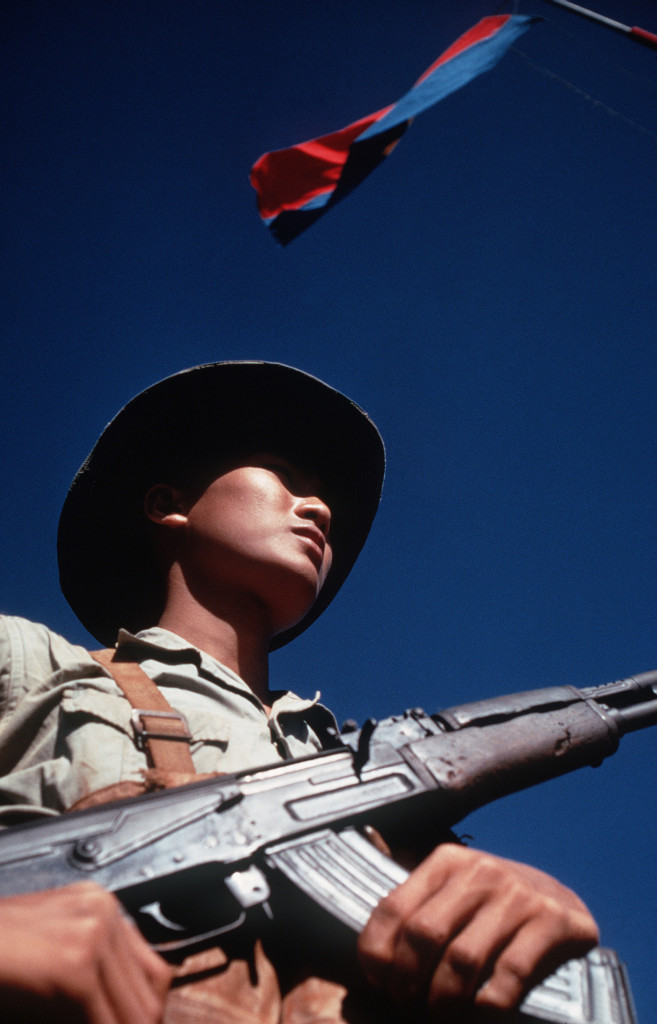 There are over 550 million firearms in worldwide distribution. That’s one firearm for every twelve people on the planet. The only question is: how do we arm the other eleven?
—Nicolas Cage, Lord of War (2005)

While Lord of War might not be the best movie, it does make a point: there are far too many small arms in the world, they are far too easy to buy, move and sell on the world market, and arms dealers will go to great lengths to sell them to anyone who will buy. The movement of small arms (rifles, hand guns and shotguns that can be used by a single person), many of which were manufactured decades ago, facilitates global, low-scale, brutal conflict. All too often, arms that one nation supplies to “allies” in another state are later used in conflict against the original donor state. Nations that would attempt to exert their material power through arms transfers should be mindful and only give arms in the most dire of circumstances.

Small arms enter the global system when large, rich, industrial nations produce and distribute them as a tool of statecraft. Starting in the 1950s, the USSR had the technology to produce the best small arms line in the world, the Avtomat Kalashnikova-47 (Automatic by Kalashnikov, 1947 model) and its family (including the AKM, AK-74, and RPK machine gun). They produced and distributed these weapons to allied Warsaw Pact states, or transmitted the designs and helped set up manufactories to encourage cooperation with the USSR.[1] This exercise in material power was effective because the USSR had large quantities of an excellent product and the receiving nation often feared for its safety.

Of course, the USSR was not the only nation to trade arms for influence: the US armed Great Britain during WWII through the Lend-Lease program; the Chinese armed the North Vietnamese with Type 56 rifles (the Chinese version of the AK-47) before the Vietnam War; the US armed the South Vietnamese with M16 rifles during the Vietnam War; and so on. Recently, the US armed the Iraqi and Afghan armies to help them fight against extremists and insurgents, and debated arming the Ukrainians to fight against Crimean separatists, who themselves were armed by the Russians. The same qualities that made Cold War arms transfers effective – a good product, a needy recipient and some challenge in which the two can cooperate – make arms transfers effective tools of statecraft today.

However, the arms stay around long after the conflicts for which they were originally produced and distributed end. By necessity, small arms need to work year after year: there would be no point in designing a weapon that could not be maintained and used repeatedly, so arms manufactured during the Cold War (such as the AK-47 family) remain on the battlefield today.[2] In fact, these guns sometimes turn up in the hands of enemies of the states that originally produced them: the Vietnamese army used their Chinese Type 56s to fight against China in the 1970s,[3] American arms for the mujahideen fighting against the USSR in the 1980’s became the weapons of the Taliban in the Afghan War, and, most recently, ISIS has seized caches of weapons that the US sent to the Iraqi Army, including thousands of American Humvees they repurpose as vehicle-borne improvised explosive devices (VBIEDS). The arms do not stop after the conflicts end; they persist in private hands, waiting to be deployed in the future.

Small arms are economically valuable, which makes them effective currency in state-to-state relations and commodities for private owners after the conflicts end. Their longevity means that the arms slowly depreciate in value, and can be used, reused and transferred for decades. After the Cold War ended, stockpiles in cash-strapped former Soviet states made their way to eager state armies, warlords and rebel commanders in Africa and Latin America.[4] The same profit motives that encourage states to transfer arms and encourage private owners to stockpile weapons also motivate corrupt state officials to illegally sell guns earmarked for government use to warlords and rebels. In the late 1980s and early 1990s, Ugandan army bases in the southern part of the country reported using massive numbers of bullets and weapons in training programs,[5] yet had little improvement to show for their supposed efforts. Simultaneously, the Rwandan Patriotic Front rebel group, located just to the south and led by Paul Kagame, who had fought alongside Ugandan president Yoweri Museveni, suddenly and mysteriously became well armed and ready to fight against the French-armed Rwandan government.[6]

Once small arms enter circulation, it is almost impossible to get them out of the market. Gun buyback programs, sponsored by wealthy nations, often simply attract damaged weapons while the best guns are stockpiled for later. This economic problem persists by design. Since gun buyback programs place a price on a model of a weapon, say fifty dollars for an AK-47, then only guns worth less than that price on the open market will be sold to buyback programs; any AK-47 worth more on the market or in the hands of some future warlord or rebel will be stockpiled instead.[7] Wealthy nations cannot offer significantly more than market value for the weapons, out of fear that private owners will sell their existing stockpiles, use the money to import similar arms, and keep a profit to boot.

So how can concerned states keep small arms from becoming a threat? There are two solutions to the problem: prevention and bullet control.

As is often the case, the best solution is prevention. States should not use transferring arms as a method of gaining influence over other states. Too often, these guns end up in the hands of people who use them against the producer in later conflicts. These guns also end up on the world market, where dissidents looking to disrupt global order acquire and use them. When arms transfers are absolutely necessary, as they might have been when the US was rebuilding the Iraqi and Afghan armies, the stockpiles should be monitored and protected so that they do not fall into the hands of other groups, as the American-manufactured Humvees fell into the hands of ISIS. Finally, if arms transfers are necessary, it would be better for states to buy functioning arms currently on the global market to give to allies rather than producing new weapons to meet the demands. While this is morally hazardous because states do not want to pay off the types of people who have large supplies of these weapons, at least this does not introduce newer, long-lasting and improved weapons into the global market. Any gun will be a menace in the world for decades, so it is better to produce fewer new ones where possible.

The second method is bullet control. While gun control certainly does not work – the arms are too valuable and too durable – new bullets are necessary every time a weapon is fired and they cannot be repaired as easily as the gun itself, if at all. When the USSR was manufacturing AK-47s for every communist peasant in the world, they were also manufacturing billions of bullets to go into those weapons. While the weapons may have persisted over the years, the bullets have been fired in conflicts, and improperly stored ammunition has corroded. New bullets must be continuously produced to keep the old guns firing. If the world can tightly control or stop the distribution of new ammunition, the guns will become useless. International arms producers already agree to UN arms embargos designed to protect at-risk populations. Arms export nations could similarly closely monitor all bullet sales, just as they monitor sales of guns to adhere to international embargos. Without bullets, an AK-47 is hardly more dangerous than a large club.

Global small arms are a significant threat. As Lord of War illustrates, the promise of profit encourages the transport and sale of weapons to new conflict makers. However, with concerted efforts to keep new arms and ammunition off the global market and to track and protect what arms remain in circulation, concerned states can reduce the threat that these weapons pose. One firearm for every twelve people is enough; there is no need to arm the other eleven.