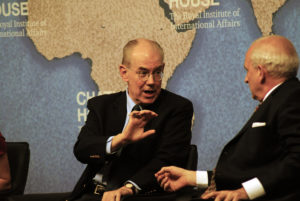 John Mearsheimer speaks with the New York Times about Russia, the Ukraine and the West. 2014. (Chatham House, London / Wikimedia Commons).

Glimpse correspondents had the rare chance to interview the celebrated scholar, getting his insight on the challenges facing US foreign policy as the world transitions from a unipolar order based on liberal hegemony to a multipolar one in which realpolitik will play a much larger role. Mearsheimer addressed weighty issues like NATO expansion, nuclear proliferation in Iran and North Korea, the influence of US foreign policy elites, the hypocrisies of liberal American foreign policy, and the rise of China.

The full video is available here.