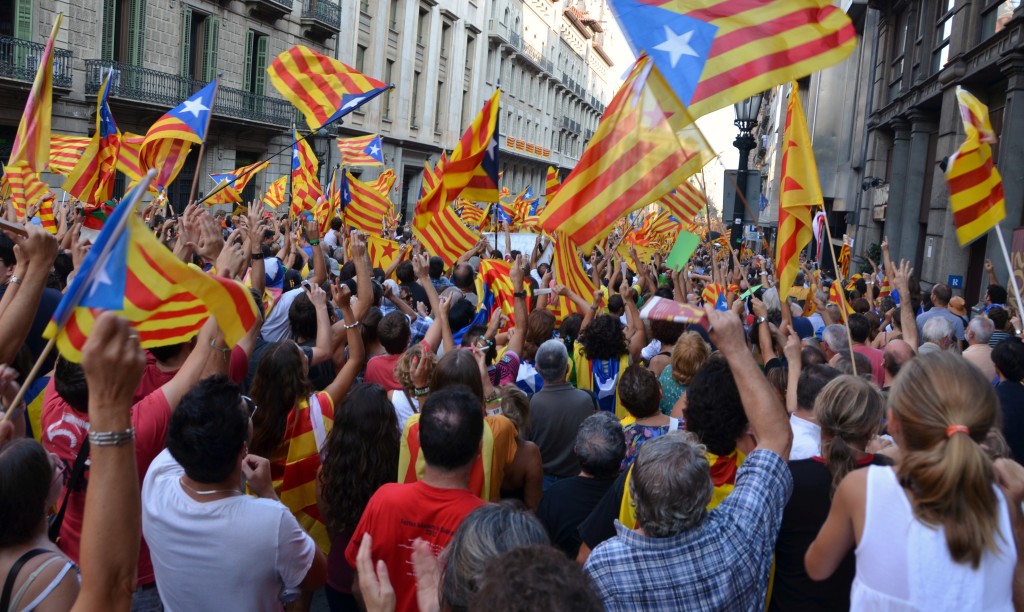 Catalonia– a self-governing region in Spain– has always been different from the rest of the country. It has its own historical and cultural identity, as well as its own language, estatuto (constitution), and its own elected government. Since 1979, “Catalan” has even been recognized by Spain as a distinct nationality. These differences have given the Catalan people a unique sense of identity that has long been the source of some tension between Catalans and their fellow Spaniards. Both Catalonia’s desire for independence and the resulting tension have been increasing throughout the last decade. Things finally reached a breaking point on October 1st when the Catalan government hosted an informal referendum to gauge support for declaring independence, despite having been banned from doing so by the Spanish government. While results showed that 90% voters supported declaring independence, only 43% of Catalans voted. Many boycotted the referendum to show their disdain for the separatist movement, and in the days following the referendum, around 350,000  filled the streets of Catalonia to protest declaring independence. The Spanish government responded to the referendum by saying Catalonia had acted “outside the law” after being banned from holding a referendum, and thus refused to grant it any legitimacy. In that time, the government was also dealing with blowback from the international community and Catalonia after sending police forces into Catalonia to suppress the referendum, which quickly escalated and resulted in 900 injured.  On October 10th, the Catalan government declared independence but quickly suspended the declaration and agreed to open a dialogue with the Spanish government to seek alternatives resolutions.

To help us better understand the conflict and get an expert’s opinion, Glimpse from the Globe sat down with Pablo Barberá, a Spanish citizen and international relations professor at USC.

What is your connection to Spain?

I was born in Spain and I’m a Spanish citizen. I was living in Spain until 8 years ago. I went to Catalonia for college in Barcelona at the Pompeu Fabra University, and in Catalonia,  half of the courses are in Catalan so I had to learn Catalan. I now speak Catalan, and I have a lot of friends in Catalonia, so I’m kind of an outsider but I have the perspective of an insider because I have spent a lot of time there, I have a lot of friends there and some part of my family is also in Catalonia, so hopefully I can be neutral in this conflict.

Have you seen a change in Catalan nationalism since you were there?

Yes, there has been a huge shift since 2009-2010… I think there was this latent feeling of identity, of being Catalan, and not so much a Spanish citizen for many people, but from what I know from survey data and the people that I know [in Catalonia], many people who previously identified as Catalan who wanted more autonomy for the region, now they outright want independence.  If you look at survey data, even as late as 2009, 2010, there was around 20% of Catalan citizens that were in favor of independence, most people 40-50% were in favor of more autonomy for Catalonia but not independence, now it’s close to 50%, and it is probably higher now after everything that has happened in the past couple of weeks. So I would say right now there is a slim majority of Catalans that want independence.

What historical / cultural factors have impacted the change?

Right, so the way I think about what’s happening is that there is latent demand for more autonomy and independence, and there was something that triggered this [movement]. Historically, Catalonia has always been different from Spain. There’s a lot of disagreement among historians, but what I think is uncontroversial is 300 years ago before 1716, Catalonia was a part of an independent kingdom, and here is where historians disagree, because to some regions there was the “prince” of Catalonia. It was like a brother kingdom to Spain, but in a way it was kind of its own nation state. Then, Phillip the VI in Spain decided they wanted to recentralize the Spanish state, and then got rid of any institutions that had been in place up to that point. So in Catalonia, they have always been demanding more independence. During the Franco dictatorship, this was one issue that encountered a lot of resistance because Franco  supported more centralization. During the dictatorship, people were not allowed to speak Catalan at schools or in public. Around 1975-1978 , democracy arrives, and the movement strengthening the Catalann identity is reborn, and there’s this constant increase in this. Basically, there’s this latent thing for the past 300 years of the Catalan people feeling different from the rest of Spain, but something has happened in the last few years that has changed the dynamics a lot. In what way are they different? They are different in terms of language, which is very important part of their identity, but also culturally they are different from the rest of Spain. They have a history that is different and the cultural traditions are different. In that sense, it depends on what you consider a nation because even though Catalonia is not its own state, most standard definitions would say that yes, they are a nation.

What are the financial factors?

For me, this is the trigger for all the change we have seen. The financial crisis hit Spain particularly hard because we had, in addition to the global financial crash, we had a housing boom. Late 2000s, everyone was building like there was no tomorrow because it seemed like there was this unending demand for new housing, but it was a bubble and it burst. What happened with Catalonia is that Catalonia is a region that is richer than the rest of the country and there is this fantasy that “Catalonia is rich” but not really. In Catalonia, there are a lot of citizens who are richer than average, so when you do the math at the regional level, Catalan tax payers are sending a lot of money to other regions of Spain. That part is true. Not because there is something against Catalonia, simply because that is how wealth distribution works. So when the crisis happened, the Catalan government had to introduce a lot of spending cuts in education and health, and many Catalans started wondering “why are we sending our money to the rest of Spain when we are not getting quality public services and we have all these restrictions?” Then they started wondering “what if we become an independent country?” Politicians saw that change in people’s preferences, and they took advantage of that. They were able to exploit that difference to win more votes. This was a successful strategy, but the downside of it is that you are also increasing this sentiment of disaffection towards Spain. Here we are 5-6 years later at the edge of the cliff and no one really knows what’s going to happen.

So you would say that this idealogical shift is what allowed separationist parties to get control of the regional government?

Yes. It’s interesting because in the last election, in 2015 or 2016, all the parties that were pro-independence went to the election as a coalition of parties, which is like one single party, that was called “together in favor of independence.” They claimed that if they got a majority of votes, then they would declare independence. But what happened is they did not get a majority of votes, they got a majority of seats in parliament. Then they had to backtrack on that promise, but the party said they were still going to go through with it. That’s interesting because they got like 45% of the votes…. This led to the referendum which is what happened on October first.

Do you think that if the financial factors were not influencing the situation, Catalonia would not be declaring independence?

Yes, that is what I think. Part of the research that other people have done shows that before, these people who were only in support of more autonomy and not independence switched their support towards more independence with one of the main reasons being financial concerns. [The mentality is] “we are suffering, we shouldn’t suffer, wouldn’t suffer if we were an independent country.” Which may not be true. There is a huge disagreement between economists and political scientists over what the consequences of becoming an independent country would be. It’s not clear at all, and it depends a lot on how the European Union would react, as well as how the Spanish government would behave in that context.

Given the misleading polls and nationalist sentiments, do you see any parallels between this movement and the 2016 US presidential election?

There is an interesting tension because we are seeing the rise of populist parties and candidates, and nativist ideas, nationalism, which reflects the rise of globalism, globalization and cosmopolitan values. So there is this interesting tension happening and… I think Catalonia is slightly different because one of the reasons why Catalonia wants to be an independent country is that they are actually much more left wing than Spain. If you look at things like preferences for distribution, they are much more in favor of increasing taxes so that the government can spend more in health and education. They are more liberal socially, as well. So while I don’t think they are related, there is a connection [to the 2016 election]in terms of the times are changing, and now we are in a world that everything seems fluid. Things that 5 to 10 years ago did not seem possible are now suddenly feasible.

Do you think that there is a resolution that is possible?

What do  you think will happen to Catalan nationalism? Will it continue to strengthen or, given a solution, decrease?

If you had asked me this before the referendum, I would have said “this is just temporary” but actually, after the referendum, my sense is that Catalonia will become independent sooner or later. Probably sooner than a lot of people expect, simply because there are these strategies of confrontation and there just does not seem like there is a potential for dialogue. The European Union has basically said that they don’t want to intervene, this is an internal affair for Spain. Things may suddenly start moving very fast with a chain reaction of countries starting to recognize Catalonia. My personal opinion is that that would be unfortunate because it would be bad for Catalonia and bad for Spain economically and socially. At the same time — and a lot of my colleagues in Spain would disagree with this– if the majority of people in a region want to be an independent country, who are we to deny the rights of a majority? In practice, they could be an independent country already.