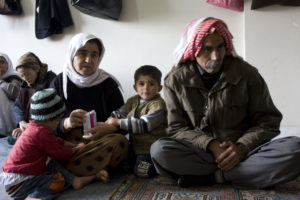 A Yazidi Family coping with the loss of their son who was killed trying to return to his village in Iraq’s north-west region to help others who weren’t able to flee. 2014 (Caroline Gluck/EU/ECHO)

On August 3, 2014, Islamic State in Iraq and Syria (ISIS) attacked Iraq’s Sinjar province in Northern Iraq, where around 400,000 Yazidis lived. The attack caused many to flee to Mt. Sinjar and was declared a humanitarian tragedy by UN Assistance Mission in Iraq chief and special representative Nickolay Mladenov. In the following days, around 10,000 Yazidis were killed and kidnapped, with around 6,800 young boys and girls forced to fight for ISIS, given to ISIS fighters, or sold as sex slaves.

Unfortunately, women who have returned will forever feel the impact of ISIS, and many are currently having difficulty recovering and reintegrating into society. Despite the atrocities committed and the dire situation these women face, this crisis has been under-reported by Western media outlets due to the lack of national and public interest. In addition to a lack of funding from Iraq, the Kurdistan Region and the international community, the Yazidi women do not have the necessary resources available to them. The road to recovery is just beginning for the Yazidi women, and the international community has a responsibility to support these women as they reintegrate back into society.

Who are the Yazidi?

The Yazidis are one of the oldest monotheistic ethno-religious groups in the region. Originating from Northern Iraq, the Yazidis also have genetic links to the original Mesopotamian people, and their belief system stems from pre-Zoroastrian Iranian religion and sun worship.

The Yazidis make up less than one percent of the Iraqi population and are often listed as ‘other’ in Iraq’s predominantly muslim society. Although they are Kurdish speakers and many consider themselves to be ethnically Kurdish, their religion is separate from the majority Sunni Muslim Kurds. The Yazidi combine various belief systems, a practice known as syncretism, and their religion is organized into a rigid caste system.

Sunni Muslims call the Yazidis “devil worshippers” due to misunderstanding the ambiguous linguistic and theological links between the devil and Melek Taus, the peacock angel created by God to complete the creation of the universe. Melek Taus is seen by ISIS as an analogous to Iblin, the djinni who defied Allah’s command to kneel to Adam. Melek Taus is seen by the Yazidi as having been forgiven by God. Due to these historical religious differences dating back to the Ottoman Empire, the Yazidis developed a closed community in Kurdistan. They rarely intermarry and generally do not accept religious converts.

The Current Situation for the Yazidi

A United Nations Human Rights Panel concluded in 2016 that the ongoing campaign of violence against the Yazidis qualifies as genocide. Beyond the many deaths and physical injuries sustained, some of the most enduring consequences of the tragedy have been the mental health effects on the women and girls who were abducted, raped and traded into sexual slavery. Every week, female survivors are hospitalized for suicide attempts. A study of 416 Yazidi women and girls found that more than 80 percent of them suffered from PTSD symptoms. Many of the women feel shame for being a survivor of gender-based violence even though the Yazidi religious leader Khurto Hajji Ismail, also known as Baba Sheikh, welcomed the survivors back into the community through reintegration and support.

Nevertheless, resources are limited. Much of the 2018 Iraqi national budget is geared towards the reconstruction of the Shiite-populated regions of the country, and budget cuts have further limited the services provided to these women as the war against ISIS has had a harsh impact on the Iraqi economy. Demographic changes are also a challenge to Iraq as Sunni families are encouraged to settling in the town Sinjar, and the Yazidi families are stuck in the Duhok camps due to the main road being closed down and full of ISIS fighters.

Iraq and the Kurdistan Regional Government (KRG) are at odds over the Dohuk-Nineveh road and the surrounding houses as it is scattered with booby traps and is extremely dangerous, making it hard for the Yazidi to leave the camps and return to their original homes. Additionally, as the Yazidi are being sought out by both Iraq and the KRG for electoral purposes, feuding over where the Yazidi should live, it makes it very difficult for the Yazidi to return home. NGOs trying to address this problem have essentially been powerless in this region due to volunteers frequently being arrested and having their offices shut down as they are not wanted by the KRG or Iraqi government.

Furthermore, according to al-Qaidi, 1,525 Yazidis remain captured by ISIS, and smugglers control their release in exchange for ransom. Many of these victims have been brainwashed, killed or are unable to escape. Nonetheless, Yazda, a Yazidi rights organization, has been working with Amal Clooney, a Lebanese-British barrister specializing in International Law and Human Rights, to bring ISIS to justice. Together, Yazda and Clooney successfully passed a resolution through the United Nations Security Council to establish an international investigation into the crimes carried out by ISIS. This is the first time the international community has attempted to prosecute ISIS and is a much-delayed step in the right direction.

What can be done?

Psychological treatment and support sessions are offered at centers in Northern Iraq, such as the Shanaz Women’s Social Centre and the Azadi Hospital’s psychiatric department. However, these resources are often far away from the villages where the Yazidi women live. In order to provide services to treat post-traumatic stress disorder, these resources need to be made more accessible. NGOs such as Women and Health Alliance International have tried to fill the hole left by budget cuts, but they simply lack the financial capability to train healthcare providers.

As the Iraqi government focuses on rebuilding the country after a war against ISIS, the responsibility relies on the wider community of NGOs and other nation-states to provide aid and vital resources, such as prescriptions, counselling and psychiatric help. Germany has made these efforts to address the issues Yazidi women face. Led by Jan Ilhan Kizilhan, a psychologist and Middle East expert who specializes in trauma, a program in Germany is helping more than 1,000 Yazidi women receive psychological treatment. However, the controversy with this program is that its difficult to determine who would most benefit from the program. Additionally, once the women arrive in Germany, they do not want to leave, so the Yazidi community does not want to send any more women abroad.

The international community should raise awareness about the situation of the Yazidi women and work towards a solution together. As Clooney argued, “this is a global threat. It needs a global response. And part of that response must be a judicial one. It cannot be only on the battlefield.” The Office of the UN High Commissioner for Human Rights also urged international recognition of the genocide so that more can be done to assure the protection of the Yazidi women, especially through funding of psycho-social and financial support. Furthermore, the dispute between the Iraqi government and the KRG needs to be resolved so the country can come together in the best interests of the Yazidi women.

Recently in October of this year, the Yazidi community found themselves thrown into the spotlight because Nadia Murad, a Yazidi woman, became the first Iraqi to win the Nobel Peace Prize. Murad was a powerful advocate to end the use of sexual violence as a weapon of war and helped push the UN investigation into ISIS’s possible war crimes. It is time the international community joined Nadia Murad by taking a stand against sexual violence as a weapon, not only for the Yazidi community but for human security and global stability.

Natalia Smith
“Natalia Smith is a Junior at the University of Southern California double majoring in International Relations and NGOs and Social Change. She is interested in foreign affairs, domestic policy and Law. Outside of her studies, Natalia is on the e-board of USC’s Troy Camp, interns at Los Angeles Central Trials, conducts research for Dr Steven Lamy and is on the Panhellenic Judicial Board. Previously Natalia has interned at the USC Shoah Foundation, been on the standards committee for Gamma Phi Beta, served as the Programming Chair for her building government as well as the programming board for USC’s Residential Student Government. Natalia has also participated in TIRP (Teach International Relations Program) which teaches complex issues surrounding International Relations to high school students. Over Summer Natalia participated in a Problems without Passports program in the Arctic Circle studying Climate Change as well as volunteering at Aegis Trust in Rwanda for a month assisting with content and program evaluation and development. Originally from the English countryside Natalia enjoys exploring Los Angeles, taking road trips and traveling. “