Hong Kong At a Glance

Known for its exquisite food, rich culture and opulent wealth, Hong Kong is heralded by visitors as a shining example of an equally efficient and enjoyable city. Tourists from all over the globe are drawn to Hong Kong for a variety of reasons: its sparkling bay, its proximity to Macau, its abundance of hiking trails and sensational nightlife, keeping Hong Kong the most visited city in the world.

However, the city is not the ultra-modern, glistening utopia projected on its exterior. Beneath the hustle and bustle, Hong Kong has an undeniable but often overlooked dark side: a side with unaffordable real estate and drastic class divisions. 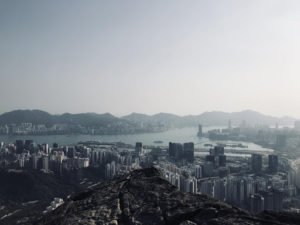 Hong Kong is known for its stunning skyline, yet beneath its glistening exterior, it has an undeniable and often overlooked dark side. (Leia Wang)

Overpopulation is undeniably one of the city’s main challenges. Hong Kong is one of the world’s most densely populated cities, and its 7.4 million residents bear the costs of the shortage of living space. As in many major cities, housing is an extremely expensive commodity. In Hong Kong, real estate prices hover between 150,000 to 200,000 Hong Kong dollars per square meter ($19,108 to $25,477) for apartments. As a result, Hong Kong is crammed with towering apartment complexes that house the majority of the middle class.

Many cannot afford these rent prices. Around 200,000 people, 40,000 of whom are children, fall in the lower-income bracket and can only afford to live in miniscule, illegally subdivided housing units known as “coffins.” Each unit measures only a barely liveable 15 square feet. Other low-income residents pack into squatter huts and cage homes with subdivided units and wire mesh-enclosed rooms.

Instead of accepting these subhuman conditions, others opt for more unconventional solutions to the problem of being priced out of the housing market, like the McRefugees, homeless populations who spend their nights at McDonald’s restaurants that stay open 24 hours. Such living conditions reveal stark disparities between Hong Kong’s financially insecure population and its wealthy upper class, whose comfortable and opulent homes sit atop the city’s many lush mountains. 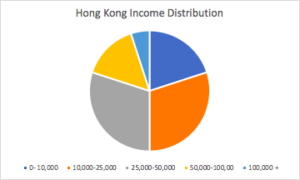 *amounts in Hong Kong dollars as of 2015

The housing disparities illustrate only part of the drastic divisions between the upper, middle and lower classes in Hong Kong. The upper echelon enjoys the very best of what Hong Kong, and indeed the world, has to offer. In fact, Hong Kong ranks as the number two city with the most billionaires in the world, with 67 of these individuals currently living there. Although they work across many sectors ranging from entertainment to telecommunications, most derive their wealth either directly or indirectly from the real estate or financial services sectors. Moreover, the business-friendly policies of the expansion-driven Chinese President Xi Jinping has only led to their wealth increasing. In fact, as of the beginning of 2018, Hong Kong’s richest 50 people saw their wealth increase by $60 billion to now total $307 billion.

Beneath the elite on the socioeconomic hierarchy lies the large middle class. A large portion of this population works within Hong Kong’s massive financial sector and enjoy the benefits of the city’s position as one of the world’s leading financial centers. The majority of them live in one of the many apartment complexes littered across the city, located either on the Kowloon or the Hong Kong island side. These massive high-rises often have anywhere between twenty to sixty floors with four apartments on each floor.

The remaining 20 percent of the population lives in poverty and leads drastically different lives. Those fortunate enough to have found employment as domestic helpers spend six days a week in other people’s homes. Waking up around four a.m., they spend 10 to 12 hours a day cooking, cleaning and taking care of children, before returning to their own apartments. Located in one of the backroads and less desirable places within the city, such as the Taikoo area, these spaces can hardly be classified as apartments and are usually between 40 – 75 square feet, not even large enough for a separate bathroom and kitchen.

The vast majority of those who are in this situation are Nepalese or Filipino women who have come to Hong Kong seeking employment opportunities. Although they only make the minimum wage of HK$4,410 ($562) per month, they send whatever money they can home to support their families still living in their home country. With a simple fast food meal costing around HK$40 ($5.10), these people barely make enough to live and are forced to rely on their employers for food and basic provisions. 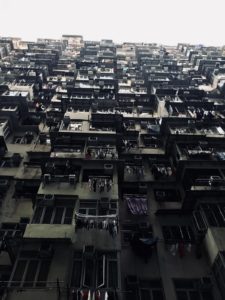 As harsh as this may seem, these people are considered lucky. For those faced with fewer prospects and extremely low-paying jobs, they turn to illegal activities out of desperation or pursuit of a better life. In Hong Kong specifically, the prostitution and drug trade dominate the underground market and are controlled by organized gangs. Hence, once an individual enters this underground market, it is extremely difficult to exit. Although most of these men, women and children turn to illegal activities out of necessity and hope to return to legal society soon, they find themselves trapped and their hopes of normal life dashed.

Despite its utopian facade, Hong Kong has systemic issues that will only worsen unless changes are made. The immediate solution would be to lobby the government to take action against inequality and resulting crime. But rather than fighting to remedy its issues, the Hong Kong government is turning a blind eye, and authorities hardly acknowledge the blatant issues surrounding them.

Moreover, the conflict of interests between land developers and residents makes the government hesitant and unwilling to step in. Although the sky-high prices of land and housing threaten the security and livelihoods of the majority of the population, some, like the city’s richest man Li Ka-shing, benefit from the discrepancy between supply and demand. On top of this, the unsteady political environment makes it nearly impossible for the government to successfully intervene.

Yet, even without the opposition, the Chinese government may be reluctant to increase regulation anway. This is because while the bottom percentile is clearly unable to escape the systemic cycle of poverty, the government seems more concerned with increasing the prosperity of the country’s upper echelon than taking care of the disenfranchised.

Currently, a few brave organizations, have taken matters into their own hands and tried to bridge the gap between the excess of resources and those who truly need them. Most, such as St. Stephen’s Society, are religious in nature and are addressing the physical needs through practical solutions like rehabilitation and job training. Others, such as Impact HK, focus more on community building and temporary acts of kindness rather than solving the systemic issue. Unfortunately, these groups are few in number, and more needs to be done to change the city’s situation. Only a systemic change implemented by the Hong Kong government can resolve the issue directly. By attracting the attention of international human rights organizations to these pressing needs, citizens and advocates abroad can put pressure on the government to take action and begin to redeem what seems to be a lost cause.