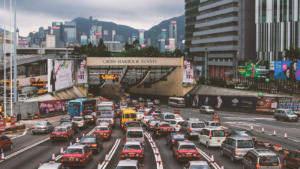 The days of Uber as the innovative app that will change the way we think about transportation is over – or at least it being the sole source of innovation. Today, many firms across Asia are starting to push the limits of what a ride-hailing app can do.  Singapore’s Grab, China’s Didi Chuxing, South Korea’s Kakao Mobility, and Indonesia’s Go-Jek have all emerged as major tech innovators. While all of these companies are very different, they do have one similarity: they started off following Uber’s footsteps and eventually pushed Uber out of the market. Additionally, all of these companies are facing increasing public scrutiny and scandals.

Each one of these ride-hailing services started off as Uber imitators, figuring out ways to build their brand in local markets across East and Southeast Asia.

Founded in 2012, Singapore-based Grab began by carving a niche for itself in the Uber-dominated Southeast Asia market. The company started off copying Uber’s model, but quickly began to innovate with Grabbike, a motorcycle ride-hailing service, throughout 2014 and 2015. With congestion being a major problem in many cities across Southeast Asia, Grab riders were able to weave through traffic while Uber drivers were stuck. Uber eventually launched its competitor to Grabbike, UberMOTO, in 2016, almost 17 months after Grab started. UberMOTO never quite caught on, and in March 2018, Uber sold its Southeast Asian market to Grab and took a 27.5 percent stake in the merger.

Grab rival Go-Jek captured the Indonesian market in a similar fashion, providing motorcycle-hailing services in Jakarta in 2014, long before competitors Grab and Uber arrived. The service quickly exploded, and Go-Jek riders’ green-apple colored jackets and helmets became a symbol to Indonesians for the best way to get from here to there. Go-Jek’s convenient phone payment system also helped bring in customers, as many Indonesians do not have access to credit cards.

Now that Uber is essentially out of the Southeast Asian market, Grab and Go-Jek are building up a vast war chest to compete head-to-head with each other. Grab has successfully raised USD $2 Billion, which includes USD $1 Billion from Toyota in its increasingly costly battle with the Indonesia-based firm. Go-Jek in turn plans on raising USD $2 Billion in order to aggressively expand across Indonesia and Southeast Asia.  Go-Jek and Grab’s aims are to out-innovate the competition and dominate the market

Becoming the end all, be all.

In competing to become the indispensable “super-app” for consumers, companies have begun to integrate ride-hailing with other services like messaging, social media, and online retail. Grab currently provides services in eight Southeast Asian countries and offers ride-hailing, bike-sharing and food delivery services among others. Grab Co-Founder Hooi Ling Tan stated that she plans on expanding Grab into a variety of markets from healthcare to financial services. She is also planning to create a “super-app” messenger service like the wildly popular Chinese-based WeChat that incorporates everything into a single app. The aim for Grab is to give partners “access to a combination of core Grab assets that no one else in Southeast Asia can offer” and “information relevant to exactly what you need.”

Go-Jek is also getting into the game of integration. Last December, the company announced that it has acquired three fintech companies to help the ride-hailing app become a “multi-platform technology group that leads payment services” in Indonesia and beyond. This follows Go-Jek’s strategy of trying to integrate multiple services and going beyond being just a ride-hailing service.

Just this year, South Korea’s Kakao which owns Kakao Mobility and the extremely popular messaging service KakaoTalk, has announced plans to invest USD $13.40 Million into JapanTaxi, Japan’s largest taxi-hailing company. Currently, Kakao users are already able to buy gifts, message friends and find public transportation, and adding a ride-sharing service would only strengthen Kakao’s position in the market. Kakao Mobility currently has about 18 million subscribers or approximately 35 percent of the total population of South Korea. Although Uber once dominated the ride-hailing market, due to a 2014 court ruling by the Seoul city government that barred the company from entering the market, Kakao saw an opportunity to enter into the ride-hailing business even though it was relatively late to the game. However, while many of these companies are experiencing extraordinary growth, many of them face a growing amount of controversy.

With such rapid success, many of these companies have started to face major controversies that are all-too-similar to Uber’s scandals in 2016 and 2017.

Just this month, China’s Ministry of Transport ordered the indefinite suspension of Didi Chuxing’s carpool service after two female passengers were raped and killed. As a result, carpool general manager Huang Jieli and the vice president for customer services Huang Jinhong have been removed from their positions. However, this has not been enough to stifle the intense public backlash online. On the Chinese Twitter-equivalent Sina Weibo, actress Wang Xiaochen sent out a post showing her deleting Didi Chuxing from her phone with the caption “goodbye!” and received more than 290,000 likes in the past month.

Go-Jek drivers are also facing an uncertain future. Due to their employment status as “partners,” Go-Jek drivers experience many of the same issues that Uber and Lyft drivers face in the US, namely the lack of legal protection and benefits that full-time employees enjoy.

Grab has also faced scrutiny over its Uber merger, as both customers and drivers adjust to Grab’s takeover. Additionally, government officials are concerned that Grab has violated antitrust regulations. There are mounting concerns that Singapore’s Competition and Consumer Commision may try to break up the merger, and there are continued issues with the slow pace of Grab taking over Uber’s share in the market.

Even KakaoMobility, which has had a relatively clean public record, is starting to face protest from South Korea’s powerful taxi unions over Kakao’s plan to offer new carpool services.

The question for ride-hailing companies like Grab and Go Jek will be whether they can continue to innovate while addressing the major problems they face, or if they will fall prey to the controversies and scandals that plagued Uber. However, if these companies succeed in integrating healthcare, messaging, fintech, and ride-hailing into a single integrated system, one can only wonder what other advances might be coming down the pipeline. While all of these companies seem to have major aspirations to innovate beyond being just a ride-hailing tech unicorn, there are still questions as to whether they can overcome the intense scrutiny that the public is starting to place on them.