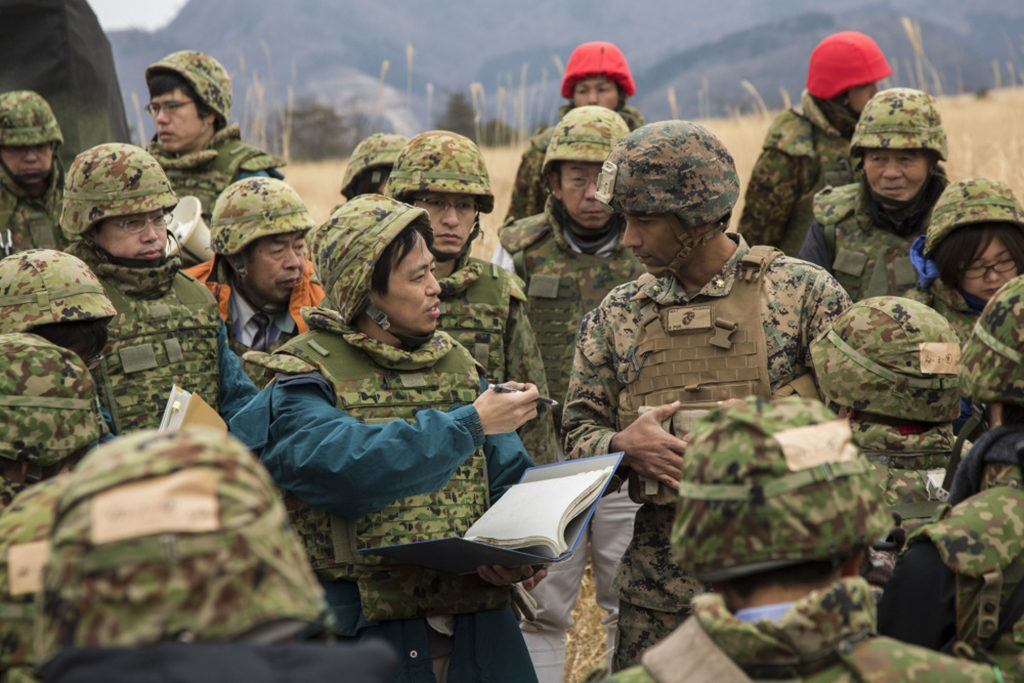 In a notable departure from its longtime anti-war stance, the Japanese government is becoming increasingly assertive on the world stage. The Japanese have grown accustomed to their unique identity as one of the world’s few pacifist countries, and many resist the new militarism, fearful that it signals a return to a dark, imperialistic past. However, Japan’s new policy direction marks a necessary and inevitable response to rising regional tensions.

Since the end of World War II, a pacifist consitution, heiwa kenpou (平和憲法), has dictated Japan’s international and military policies. For the past seven decades, the country has closely adhered to these values and refrained from going to war to settle any disputes.

This war-averse policy represents the reversal of a starkly different legacy: a century of imperialism and military prowess of the Empire of Japan during the first half of the 20th century. The Imperial Japanese Army terrorized the people of neighboring Asian countries as it endeavoured to expand its territory and gain control over the Asian continent. This goal never came to pass as the Empire and its fellow Axis powers were defeated at the end of World War II.

In 1947, Japan enacted a new constitution, drafted mostly by the staff of General Douglas MacArthur, the Supreme Commander for Allied Powers in occupied Japan. The constitution’s Article 9 states that “the Japanese people forever renounce war as a sovereign right of the nation and the threat or use of force as means of settling international disputes.” After decades of nonstop war, the Japanese embraced this new pacifist stance as a welcome opportunity to focus on rebuilding the economy and public morale.

Seven years of post-war American occupation gave birth to a US-Japanese alliance that remains strong to this day. With a powerful ally to call upon for protection–and American military bases operating throughout the country–Japan was free from worry of attack or war, especially in the last several decades of relative peace in Asia. The country so readily embraced its new pacifist identity that only the oldest generations now remember a warlike Japan.

However, the turn of the century brought changes at home and abroad. Japan is beginning to assert its military power through legislative decisions and budget priorities, likely as a response to the intensifying power struggle among East Asian countries.

Shinzō Abe, who served as Prime Minister in 2006-07 and was again elected in 2012 and 2014, is one of the most nationalistic and militaristic leaders to govern Japan since the end of World War II. One mark of his agenda is an increase in defense spending. The Japanese Ministry of Defense stated in August 2017 that it will request a record 5.25 trillion yen ($48 billion) for fiscal year 2018 as a security response to a series of North Korean ballistic missile tests and increasingly assertive Chinese naval movements in the East China Sea.

Beyond his fiscal policy, Abe revealed his militarism perhaps most clearly in his push to pass a bill to reinterpret war-renouncing Article 9. In 2014, the parliament approved a reinterpretation that allows military retaliation against countries that attack Japan’s allies, claiming this a form of “collective self defense.” This measure marks Japan’s philosophical drift towards what Abe calls “proactive pacifism.”

China has raised strong objections to Article 9’s reinterpretation. This alarm stems from a history of tension with Japan since its imperial rampage through the continent in the early 20th century. The two countries maintain a passive-aggressive rivalry – politically, economically, and now increasingly militarily with China’s aggression in territorial disputes in the water around Japan. China’s discomfort grows as Japan begins to reassert its military prowess and shifts closer in alliance with the US.

One other threat undeniably feeds Japan’s military expansion: its small impoverished neighbor, North Korea. The rogue state is becoming more vocal and aggressive towards Japan (and the rest of the world), emboldened by its development of nuclear weapons and intercontinental ballistic missiles. North Korea continues to test its missiles around and over Japan, the latest missile test in November plunging into the Sea of Japan.

With such hostile neighbors, it is clear why the Japanese government is eager to bolster its military might to maintain its regional power and international relevance. Yet the Japanese people remain divided on Abe’s new direction, some fearing that the country is embarking on a dangerous path reminiscent of its imperial days. The bill for Article 9’s reinterpretation passed with significant resistance, both from Abe’s opposing parties in parliament and from Japanese citizens. The streets were filled with protesters chanting “We’re against war” and “Don’t destroy Article 9,” brandishing banners like one with a picture of Abe that read “Heading to war – don’t let him.”

These opponents predict that Japan’s investment in the defense sector will almost inevitably result in war. While there is certainly now more potential to get involved in fighting, that does not necessarily mean that Japan will become involved in frequent wars. It certainly does not necessitate a reversion to the imperialistic empire.

Pacifism suited the country well in the latter half of the 20th century as it rebuilt from the ruins of the war. But now, 72 years after the end of World War II, absolute renouncement of any type of military action, even with the exception of self-defense, presents a glaring liability.
That’s not to argue that Japan must immediately develop an entire nuclear arsenal, or that the US should abandon its Japanese bases and leave its ally to fend for itself. In fact, its close American alliance removes the need for Japan to have its own nuclear weapons, lest it threaten or provoke China or North Korea and increase the likelihood of nuclear war.

This island country should not and will not become the next great military power. Yet in a tense regional and global political environment, it is more than appropriate for Japan to bulk up its military to deter conflict and be capable of protecting its people if necessary. It is critical for the future of Japanese security.

Japan’s heiwa kenpou (平和憲法) does not literally mean “pacifist constitution.” Kenpou (憲法) translates to constitution; heiwa (平和) means peace – not pacifism. The country has adhered to a peaceful constitution for more than half a century and it will continue to do so. Japan’s more assertive military policies will help secure and maintain the peace for its people among the growing tension and uncertainty with its neighbors.