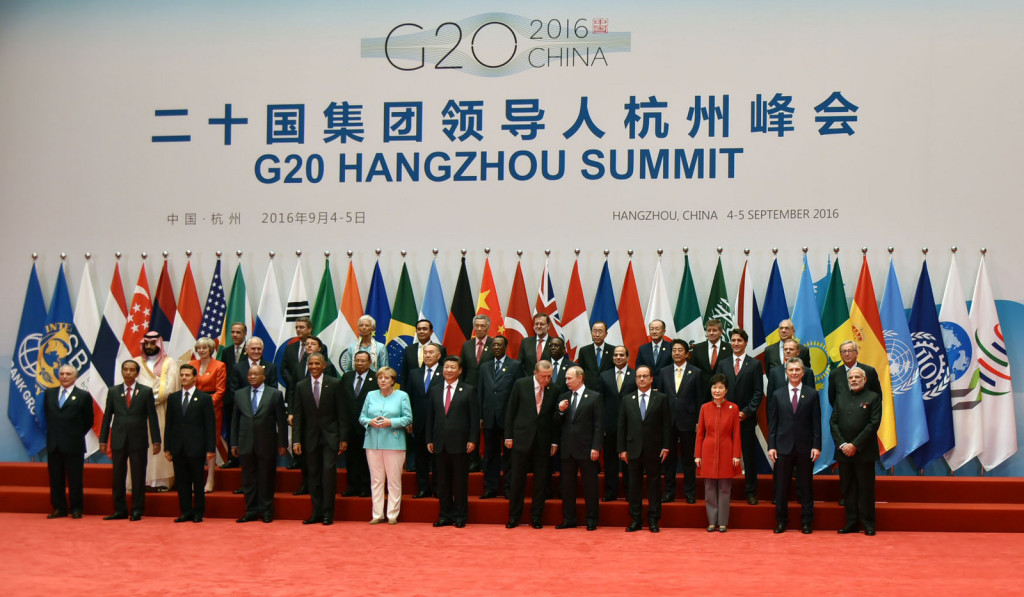 Heads of state assemble at the G20 Summit in Hangzhou, China, with Chinese President Xi Jinping in the center. September 2016. (Narendra Modi/Flickr)

On October 1 of this year China celebrated a “historic milestone” as the International Monetary Fund added the renminbi (RMB) to its elite basket of reserve currencies, joining the dollar, the pound, the euro and the yen. This codification of its currency is but one of China’s many milestones in recent years as it entrenches itself in the global economy. Given the country’s standing as the world’s second-largest economy with a growth rate that evokes jealously among developed nations, few question China’s rise as a preeminent economic power. Far from merely expanding its own proportion of the proverbial pie, however, China’s economic activities have assumed a fundamentally integrated character.  As the US prepares for a new president and China poised to overtake the US economy within a decade, China’s regional and global integration presents numerous challenges and opportunities that policymakers would do well to address now.

The internationalization of the RMB has long been a stated goal of the Chinese government. Although its past policy of weakening its currency has rendered the RMB a lightning rod for political criticism, the rhetoric has largely softened. This month, IMF Managing Director Christine Lagarde praised China’s strides in “liberalizing and improving the infrastructure of its financial markets.” In the Treasury Department’s latest report to Congress on Foreign Exchange Policies of Trading Partners, it assumed a markedly tamer position on China. It found that China made progress on allowing the RMB to appreciate and reining in its current account surplus; two contributing factors to the renminbi’s adoption as a global reserve currency.

Alongside advancing the wide use of China’s currency, 2016 provided another platform for Chinese economic collaboration and integration. For the first time, China held the presidency for the G20 Summit, which elevated Xi Jinping as the mouthpiece of the world’s collective twenty most advanced economies throughout the year. He further selected the summit’s theme: “an innovative, invigorated, interconnected and inclusive world economy” with China assuming a leading role in “advancing international economic cooperation,” according to Xi’s welcome message. 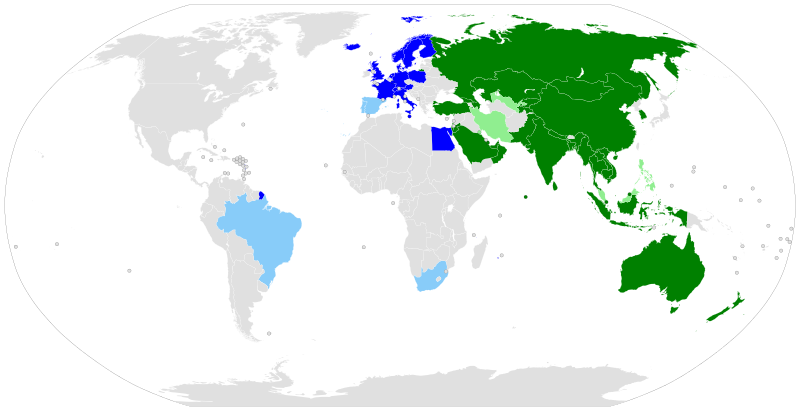 Perhaps China’s boldest incursion into the integrated economy was the establishment of the Asian Infrastructure Investment Bank in 2015 and its opening this year. Seen as the eastern analogue to the west’s World Bank, the AIIB has confounded US policymakers who cannot decide whether to jeer it or join it. Meanwhile, China has spent the past year assiduously promoting infrastructure projects to its regional neighbors though the One Belt, One Road initiative. To date, the AIIB boasts 57 members—including many of the US’s closest allies—a capital stock of $100 billion, and four inaugural projects.

These developments demonstrate that China is not operating as an independent actor on the economic stage, but rather a profoundly interdependent one whose rise now relies on cooperation and collaboration. As the election season tends to intensify rhetoric and force a dichotomous “good versus bad” view on China, one may reasonably worry about what this portends for the future. Realistically, China as a driver of integration is not inherently bad, but such a paradigm shift risks normalizing its significant internal challenges that the US can and should assume a leadership role to remedy before welcoming China as a major interconnected player.

China produced more cement in just three years, 2011-2013, than did the US in the entire twentieth century; 60% of China’s aluminum production has a negative cash flow, and China produces more than double the amount of steel as the world’s next top four producers combined. The EU Chamber of Commerce in China identified eight industries that are “severely affected” by overcapacity in which 20–35% of production is never used. China’s history of central planning haunts it today in the form of inefficient state-owned enterprises that accumulate such massive inventories, they begin to spill over into international markets. The US Trade Representative reports that overproduction in Chinese heavy industry distorts global markets and harms US workers, as well as other G20 members and developing markets. Last year, China produced 300 million tons of steel in excess of demand. Consequently, the steel flooded markets at artificially low prices, prompting the US, EU and Japan to impose a 450% anti-dumping duty this summer. Chinese industrial dumping depresses production in other domestic economies, applies downward pressure on wages, and triggers producer price deflation.

Many global financial leaders reportedly criticized China for its overproduction at October’s IMF and World Bank meetings. China, for its part, has called the steel tariff “irrational” and dismissed concerns about overcapacity as “hype.” Even so, China has announced a plan to eliminate 100–150 million tonnes of crude steel production, and it has begun paying companies to exit the chemical industry, another sector plagued by overproduction. In September the G20 proposed the formation of a global forum to coordinate reductions in steel overcapacity, but China must champion these production cuts given its wildly disproportionate market share. The US, meanwhile, can use its global influence to withhold market status for China and maintain the pressure of anti-dumping duties until it makes meaningful progress on restructuring its production and allows the so-called “zombie industries” to fail.

US President Barack Obama and Chinese President Xi Jinping wave from the balcony of the White House during a September 2015 state visit. At the visit, the two discussed issues of intellectual property rights and cybercrimes (IIP Photo Archive, Flickr).

General Keith Alexander has asserted that IP theft amounts to the “greatest transfer of wealth in history,” and it so happens that China accounts for the world’s largest source of IP theft. Cyber-enabled IP theft does devastating harm to the US economy, costing about $300 billion annually—a figure comparable to US exports to all of Asia each year. The US Trade Representative estimates that if Chinese piracy were reduced by 50%, legitimate software sales from the US to China would increase by $4 billion. These are just bilateral figures; projected to the world stage, China’s IP theft eviscerates the incentives to innovate, deprives entrepreneurs of hard-earned revenues and eliminates employment at businesses of all sizes.

Fortunately, there are already policies in place for the US to counteract Chinese IP theft. Section 337 of the Tariff Act of 1930 gives the International Trade Commission broad authority to sequester traded goods that contain or benefit from stolen IP. The Obama Administration issued Executive Order 13694 in 2015 declaring cyber-enabled IP theft a national security and economic emergency. The order, along with Section 1637 of the 2015 National Defense Authorization Act, provides for the unilateral use of targeted sanctions against foreign agents and entities that engage in IP theft or cyber espionage. These statutes provide powerful tools to combat China’s malicious activities before they spill over into the international economy, but they are currently grievously underutilized. The 2013 IP Commission Report co-chaired by Jon Huntsman and Dennis Blair offers over twenty specific policy recommendations to combat IP theft, including creating a civil cause of action for victims of cybercrimes. Policymakers should partner with American companies to deny Chinese hackers access to US markets and vigorously defend intellectual property rights and the hundreds of billions of dollars it contributes to the economy.

A primary reason for the US’s refusal to join the AIIB is China’s notoriously low and inadequate standards. The White House National Security Council has repeatedly questioned China’s ability to meet high international standards on its array of initiatives including the AIIB and the Regional Comprehensive Economic Partnership trade deal. Standards in this context refer to more than just physical quality; they also connote governance, transparency, accountability, protection of rights, and social and environmental safeguards. Xi Jinping’s unprecedented anti-graft campaign, China’s repressive stance against labor rights and the mainland’s irredeemably polluted air are evidence of the country’s significant struggles on these fronts.

From a policy perspective, the best way to effect change is from the inside. The US has mastered and championed the west’s idea of high standards and embedded them in negotiations with its Pacific Rim partners in the Trans-Pacific Partnership. The US should move to ratify the trade deal immediately, notwithstanding the ardent and economically illiterate anti-trade election rhetoric. Aside from its demonstrable economic and strategic benefits, the TPP embodies and would enact the “highest-standard trade deal ever negotiated,” with provisions that directly address good governance, state-owned enterprises, environmental protection, human rights, intellectual property and labor standards. 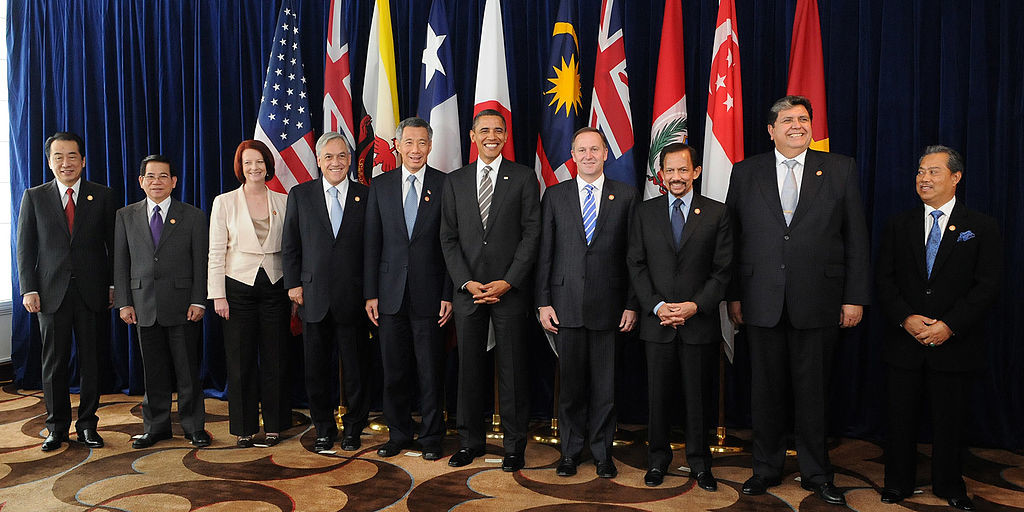 China’s RCEP by contrast covers none of these areas except intellectual property rights—which, for reasons discussed above, is not China’s strong suit. The US and its eleven partners concluded negotiation of the TPP, which excludes China, in November 2015. China and its fifteen partners met most recently in Laos for the 14th negotiation round of RCEP, which excludes the US. TPP encompasses $28 trillion in GDP; RCEP, $21 trillion. Seven members of each trade deal are members of both trade deals. The US and China are essentially engineering trade blocs in direct competition with one another, and it is incumbent upon the US, having concluded and signed the higher quality deal, to ratify it and admit the many nations that have since expressed interest in joining.

Failing to follow through, the US and global economy will find itself not so well served by the result. The world will follow someone’s example if not the TPP’s. China’s trade deal would prevail, and the Indo-Pacific—the world’s most robust economic and population center—would be held to the lowest of international standards. In game theory, this provides a prime example of a coordination failure. Under a ratified and enacted TPP, RCEP would likely collapse under its own weight, and the US could use the leverage of its regional partners to induce China to assent to the TPP’s standards and join the deal. Game theory would call this the optimal equilibrium, and indeed the world would be better for it.

As China’s own GDP growth rate begins to diminish, the country has clearly raised its gaze to the international arena. Many of its initiatives have garnered great success, from the internationalization of its currency to its successful hosting of the G20 Summit to its largescale infrastructural undertakings. In entrenching itself into an increasingly integrated world economy, China has discovered its niche for continued influence and growth. In so doing, however, it exposes the world to its own extensive economic ailments. There are many more than those discussed here, but each of these dimensions illustrates how the US and China, even on ostensibly bilateral issues, are operating on an international level with global ramifications. As the world’s largest, most interconnected and influential economic power, the US should not hesitate to prosecute its powerful tools of economic statecraft to chart a course for Chinese integration held to the highest standards.