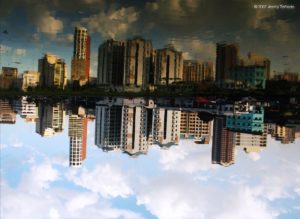 According to a report published by C40, a network of the world’s megacities committed to addressing climate change, over 800 million people will live in cities where sea levels could rise by more than half a meter, or approximately five feet, by the year 2050. Despite President Donald Trump’s contrary claims, climate change is real, and the global challenges we collectively face are daunting.

In Southeast Asia, the intense challenges of climate change have disproportionately affected its major urban centers. As a result, citizens in Southeast Asia’s megalopolises are finding themselves on the front lines of a changing planet. Home to approximately over 650 million people, the region houses major financial centers, such as Singapore, major contributors to greenhouse gas emissions, such as Indonesia, and places of immense ecological diversity across Borneo, Cambodia, and Burma just to name a few. Southeast Asia is also home to one of the world’s fastest growing populations, making climate change a very real and urgent threat. Three cities in particular, Singapore, Jakarta and Metro Manila have experienced the effects of and are coming up with new innovative solutions to best tackle climate change.

As both a city and a nation-state, Singapore has been more aggressive in addressing climate change than most other cities and countries in the region. Part of its push may lie in the immediate concerns for the city-state, with most of its land mass lying only 15 meters above sea level. Additionally, the infrastructure that the city’s intense urbanization requires has decimated the mangroves and forests around the city, which has lead to major challenges for future planning. 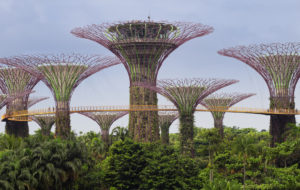 Garden by the Bay; a giant park that’s part of Singapore’s plan to transform itself from a “Garden City” to a “City in a Garden.” (Ray from Manila/Flickr)

With the mounting challenges, Singapore is poised to take massive strides in addressing climate change through direct government initiatives. Since its establishment in 2010, the National Climate Change Secretariat (NCCS) has been instrumental in shaping policies that will allow Singapore to adapt to the effects of climate change and develop new economic and green growth opportunities that arise. From a carbon tax to investments in natural gas and renewable energy, Singapore has implemented a wide variety of policy initiatives and is continuing to update its infrastructure to reach its target greenhouse gas emissions. According to the Government of Singapore’s projections, the city aims to save 15 percent of its 2013 electricity consumption in 2020. As a result, Singapore will have saved $44 Million USD.

Singapore is also uniquely situated to use its financial strength to develop new fields in finance. For instance, the city has an ambition plan to be a hub for green finance. Green finance, according to the United Nations Environmental Program (UNEP), is the use of financial flows from public, private, and non-profit sectors for sustainable development priorities. In June 2017, the Monetary Authority of Singapore (MAS) kick-started its plan to develop a green bond market with the “Green Bond Grant” that will be reimbursable of additional costs of up to $100,000 USD obtained through external reviews of a green bond. While this will be a useful tool to help spur green investment in the region, it is clear that there is still a lot of work to do; DBS Bank estimates that ASEAN countries require around 3 trillion USD of green investment until 2030.

North Jakarta, part of the sprawling megalopolis of metro Jakarta and home to 1.7 million people, could be 90 percent underwater by 2050. Indonesia is a major contributor to climate change and could see major consequences from its actions. Similar to Singapore, Jakarta faces infrastructural problems related to climate change. However, Jakarta’s main issue comes not from sea level rise, but rather from land level sinking. Sinking at an average rate of 1-15 centimeters a year, some of Jakarta’s neighborhoods and buildings have disappeared underground, and dirty brown, sewage-laden rivers have suddenly appeared, flooding major business and financial areas. 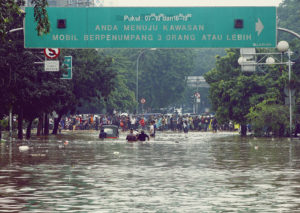 Jakarta’s precarious situation comes from a variety of factors related to location, rapid urban growth and, most importantly, an overuse of groundwater. According to a report produced by the Urban Climate Change Research Network, close to 90 precent of the Jakarta Metropolitan area lies below sea level, with around 50 percent of the population living in informal settlements known as Kampungs that are vulnerable to flooding. In fact, since its historical roots of haphazard land reclamation projects initiated by Dutch colonial authorities, the city has grown faster than infrastructure has been able to catch up or be maintained. Additionally, currently around 65 percent of Jakarta residents rely on groundwater. Due to demand, the groundwater is becoming more scarce, and wells have to be dug deeper and deeper, leading to a very unstable situation.

In order to alleviate these issues, Jakarta’s main project has been the “Giant Sea Wall,” or “Great Garuda,” which is a USD $40 billion undertaking that both strengthens existing onshore barriers and constructs a 15-mile outer sea wall with artificial islands to reclaim land from the ocean. However, there are major concerns from experts who argue that the project doesn’t address land subsidence or groundwater use and cuts access to the oceans that many Jakartans depend on. Local community efforts and community organizations may offer alternatives to better address climate change, but the verdict is still unknown. 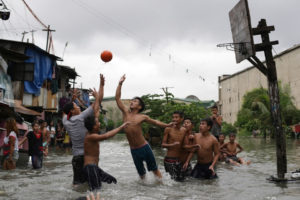 Youth in urban Philippines enjoying a game of basketball despite flooding. (Zach Dickow/Flickr)

As the biggest city in the Philippines, Quezon has made it a point of civic pride to become a leader in sustainability. Led by its current mayor Herbert M. Bautista, Quezon City has placed sustainability at the forefront of civic policy by reducing Quezon City’s carbon footprint, altering  the city’s infrastructure to become more sustainable and restricting the use of non-biodegradable materials such as plastic bags. Mayor Bautista and the Quezon City Council have been aggressive in addressing climate change policy as part of its  “Quezon City Local Climate Change Action Plan,” a systematic blueprint for the city to follow as it embarks on climate change policy.

Following Quezon’s lead, Manila and the Philippines as a whole have become aggressive in addressing climate change. During the 2015 Paris Climate talks, Manila issued a call to action on climate change, requesting cooperation, justice, and solidarity when facing this issue. Even the populist President of the Philippines, Rodrigo Duterte, who found a common kinship with the climate-denying US President Donald Trump, has stated that climate change is real and is a top priority for his administration.

While the planet continues to warm and global political leadership continues to flounder around on how to best address it, cities across the globe and especially in Southeast Asia refuse to wait for policy solutions from above to direct change. They are taking the initiative to survive and even thrive in this new terrible normal.