Trending:
You are at:Home»Regions»Americas»A Seat at the Table
By Nayeli Riano on October 16, 2016 Americas, Op-Ed 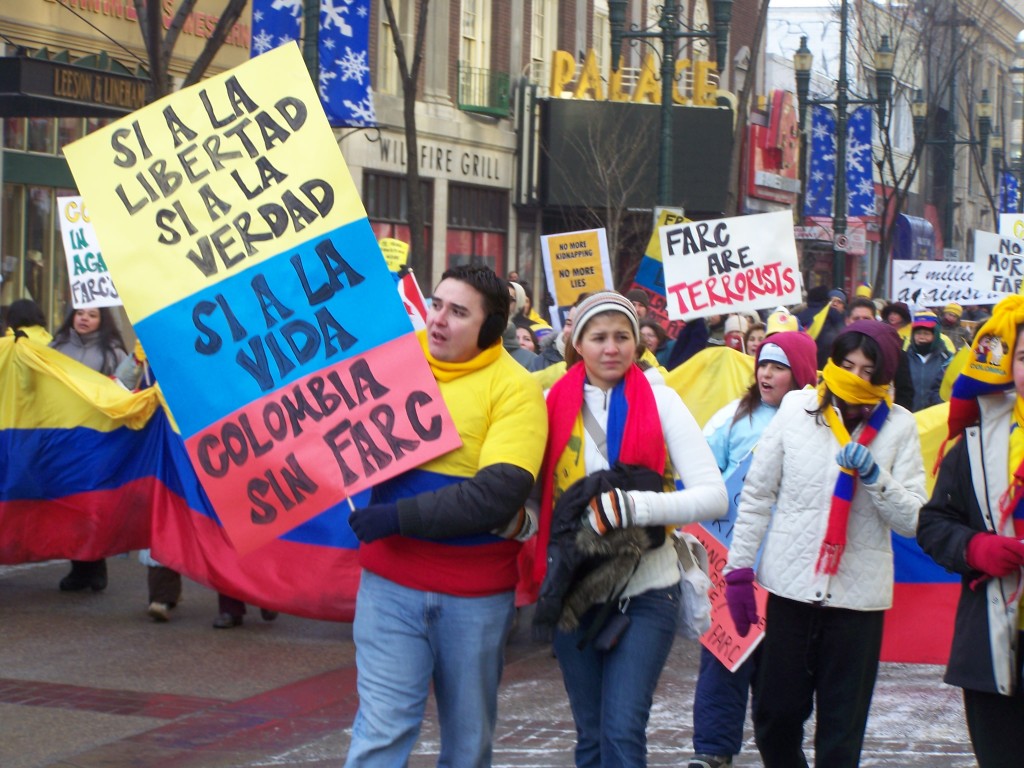 Politicians disregarded the impression they were leaving on their people when they cooperated with the leaders of an armed guerilla. (Wikimedia Commons)

In a historic turn of events, a country decided to vote against peace this October. A people tired and plagued by the longest-lasting armed insurgence in Latin America, when kindly offered the option to end what has been the greatest cause of their social unrest, decided to say, “No, thank you. We like war. Let’s keep things just as they are.” Or perhaps, in a reassuring turn of events, a country with a delayed promise of peace that started back in 1982 decided it was not going to settle for the political accords of corrupt politicians who speak of justice and peace as readily as the boy cried wolf.

The plebiscite in Colombia should serve as a lesson to those who favor rendering complex political questions as a matter of black and white—of yes or no. Like Brexit, it served as a reaffirmation of common law. More importantly, it demonstrated that the people’s opinion bears a social legitimacy beyond the comprehension of institutional politics.

The Colombian government promoted their Mesa de Conversaciones (Conversation Table) nearly four years ago as an effort to reach peace between the state and the Revolutionary Armed Forces of Colombia (FARC), a guerrilla group that has terrorized the country for decades. The problem is the peace accord was not supposed to be negotiated between the government and the guerrilla, but between the people and the guerilla, with government as a mediator.  Respected politicians decided to engage in civil conversation with Farc leaders, and in so doing Colombian officials made sure to pull Farc leaders a seat at their table but rarely ever offered a chair to the people directly affected by the guerrilla’s terrorism.

The table is a symbol of civility. An object that beckons conversation and welcomes the civil exchange of the ideas, opinions, and stories of those seated. When we agree to sit at a table with someone, we are acknowledging there is something to be said from one or both parties worth discussing. Which is why you wouldn’t sit at a table and converse with the people who once kidnapped your children, seized your land and terrorized your community in a bid for political power. When discussing diplomatic matters or domestic issues, we often forget that the same social expectations we have for our families and friends can and should extend beyond the household to our political lives. Politicians and criminals, likewise, ought to be held to the same expectations of common sense, morals and values that we extend to the people we encounter daily.

To their disadvantage, politicians disregarded the impression they were leaving on their people when they cooperated with the leaders of an armed guerilla. By sharing the communal space of a table, the government legitimated the guerrilla’s violent crimes. The plastic civility was a slap to the faces of war victims and depicted the country as weak and dishonorable as it succumbed to an army known for pushing its Marxist agenda at gunpoint. They forgot the table is also a symbol of equality—a leveled playing field for people of equal right and of equal premise to converse over the topic at hand. It follows, then, that civility plays a role in our view of what constitutes equal right and premise. If the other person seated at the table will not converse respectfully, and if their history goes against the very nature of civility, it’s impossible to pull them a chair and call them an equal. While Colombian politicians chose to snub these implications, the people took note of their disgraceful behavior. The plebiscite vote tells the rest of the story.

It is important to bear in mind that citizens voted on the accords of the treaty and not on peace itself. The accords reached during these conversation tables were rejected mainly because they failed to respect the common people. Once again I refer to our table analogy: to sit and share a common space also implies respect from one party to the other. The accords demonstrated that the guerilla leaders negotiating peace had little respect for the Colombian people. The supposed peace accords guaranteed several benefits to guerrilla members, including that they be able participate politically after their disarmament. Farc leaders also requested “transitional justice” to help their members find jobs in order to reintegrate them to a normal, civil society after the signing of the peace. The countless violent crimes that Farc members committed towards civilians, then, such as the use of anti-personnel minefields that blew up and mutilated innocent passerbyes, children, and farmers, would fall to the margins so that insurgents can have the right to live without having their pasts working against them post-peace. 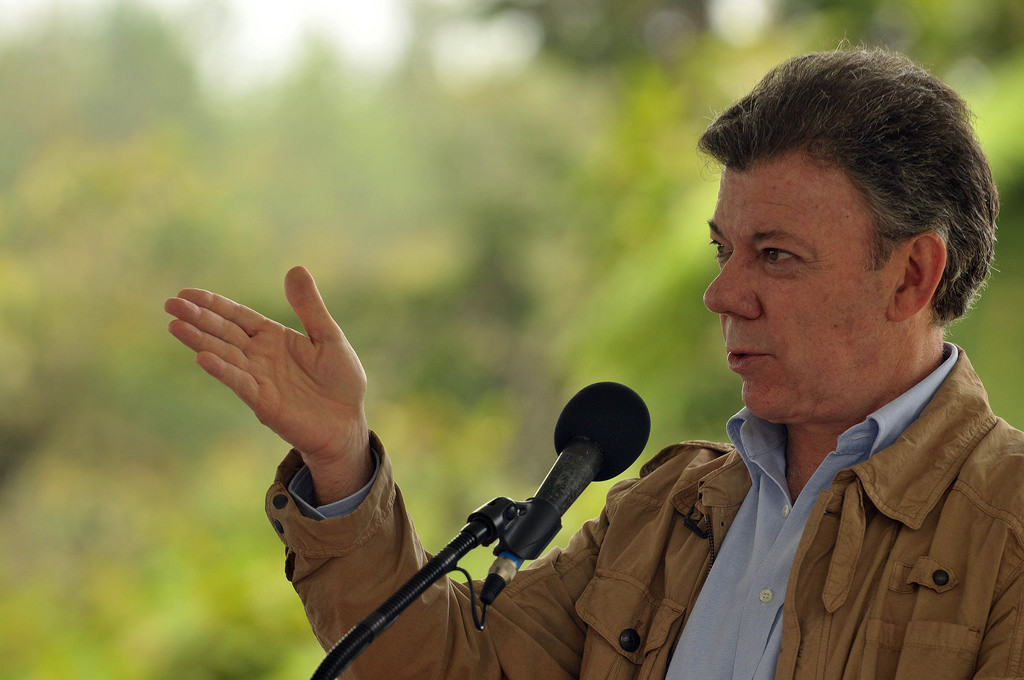 “He should also know that seeds are planted in soil.” (Ministerio TIC Colombia)

So what was in it for the Colombian people? Back in 2010, government introduced the law of restitution (Ley de Restitucion) that was meant to work collaboratively with the law of the lands (Ley de las Tierras) and the law of the victims (Ley de Victimas) to help those people who had been affected by the guerrilla attacks. The agreements included emotional and psychological support to victims of rape and violence and also offered to give them information of places that would provide legal and therapeutic assistance. This emotional support for victims was short-lived, however. Last year, the Colombian government revealed their political and special interest ties when they publicly stated that the Farc could not, and should not, be considered a terrorist group because they form part of the nation’s armed conflict and are protected under International Humanitarian Law despite the thirty-three other countries that label them as a terrorist group, including the United States. Government representatives openly promoted the Yes vote for the peace accords, suggesting that their best solution to bring about said peace is by consoling victims and forgiving criminals.

The Colombian government also managed to bastardize another important element of a “conversation table”: the table as a sign of hospitality. Diplomats embarked on a traveling peace show and paid millions of pesos to fly Farc representatives and other politicians to fancy hotels in the Caribbean and Scandinavia to discuss Colombia’s internal issues: They indulged Farc leader’s choice of traveling to their idea of utopia, Cuba; and they had their conversation take place in a “model” nation of peace, Norway. Inculcating civility and domestic peace through efforts done on foreign soil is absurd; it’s like taking a person who fails to demonstrate civility at our own table to another, foreign home hoping that they will change their manners. While Colombian officials excursed their conversation table around the world, they left their people back home feeling ignored and excluded from an issue that was personal to their shared and lived experience.

President Santos, who will be receiving this year’s Nobel Peace Prize for his efforts, stands by his peace talks stating that, “Peace needs to be planted” and that it cannot be implemented from one day to the other. If this statement is true, he should also know that seeds are planted in soil; peace doesn’t work implemented from the top down in a legislative court in Norway. The people who should have the greatest amount of say in these negotiations were ignored, and the place where the most important conversations need to take place was traded for international press coverage. The people that deserved a seat at this table were the Colombian people, not foreign humanitarians and politicians.

The Colombian government set up a table of conversation with rickety legs. Politicians misdirected and misallocated their civility, their equality, their respect, and their hospitality for a group that could never, and will never, understand the meaning of these words, even if it gets what it wants. In the name of peace the Colombian government wanted to present itself as an exemplary diplomat, but years of strife have left Colombians wanting political decorum as much as they want Lutefisk for dinner. When it actually came time to bring the vote of the accords back to Colombia, the people who knew the situation best voted from experience.

It is not because of their ideological views that Farc members should have been excluded from the conversation tables, but because no one who is willing to resort to violence and terror to prove their point is worthy of that respect. The Colombian guerrilla forfeited their opportunity to sit at the conversation table when they refused and failed to abide by the guidelines of a democratic and representative government; that is, to work for the change they want by convincing people of their position through civil exchange. This is what we do in a civil society, and anyone who refuses and fails to act with reason does not deserve a seat at any table. Peace for Colombia does not come from pretentious negotiations at five star hotels throughout the world; it does not come from men in suits and ties; it does not come from men in guerrilla uniforms brandishing their guns on their belts; it does not come from Norway.

It is worth mentioning that those who voted Yes voted out of the same frustration with their government and out of the same hope to see an end to a horrific internal strife that has affected generations of Colombians. The difference is that the No camp wanted to express their disapproval of the accords and of their government’s negotiation for peace, both of which were devoid of justice as they refused to punish guerrilla members for their past crimes. Above all, the No vote was a message to guerilla members and leaders: their crimes will not be pardoned so easily. Looking forward, the plebiscite vote has opened the door to a more democratic version of the peace process in Colombia that will include, hopefully, a renegotiation of the terms so that guerrilla members who murdered civilians will actually face a proper punishment for their crimes. Even if it implies a longer conversation, Colombians have demonstrated they want to have the tables turned in their favor and their voices heard over those of criminals who derive their power from terror.