Trending:
You are at:Home»Regions»Americas»A Resurgence of Racist Ideology in America
By Ashlyn Elliott on April 25, 2019 Americas, Politics and Governance 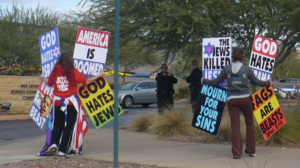 In May of 2018, two brothers of a historically Jewish fraternity, Alpha Epsilon Pi, were harassed and physically assaulted near Towson University, Maryland. Classified as a “hate-bias” crime in a statement released by Towson University, the incident was only covered by two local newspapers despite its graphic nature and public display.

To many Americans, the hostile political atmosphere following the election of President Donald Trump and the ‘Make America Great Again’ campaign have fostered an environment of intolerance, giving extreme right-wing idealists a platform to stand upon. With hate crimes on the rise for the fourth consecutive year, racially-fueled violence has become more acceptable in American society, desensitizing the public in the process and allowing incidents of hate crimes to go virtually unpunished.

One such incident, ignored and unpunished, occurred at Towson University in Maryland. As two members of Alpha Epsilon Pi were walking near campus in the middle of the day, two unidentified students shouted a racial slur, “f*** the Jews” and punched one victim in the face before the assailants ran off. After filing a report, the administration released an official statement condemning the behavior and declaring that any student found responsible for acts of hatred, racism or bias “could be subject to sanctions including suspension and expulsion.” However, their decision to use the word “could” instead of “will,” falls short of entirely condemning the actions and clearly outlining consequences, a troubling response from an institution expected to protect and defend its students.

From abuse of the Native Americans in the early 19th century, to the horrors of the Jim Crow laws, and even to contemporary political examples such as the Muslim ban, the United States is no stranger to racism. Towson University lies at the heart of a once Confederate state, and traditional Southern racism, although less overt, still exists today. In fact, Maryland reported 398 hate crimes in 2017, with 19 self-proclaimed hate groups operating at any given time. Thus it is evident that the historical precedent of racism and anti-semitism has not evolved with progressive ideals but rather festered under the radar for years, bubbling over when tensions are high.

The Towson case demonstrates a transition from subtle racism to unapologetic anti-Semitism. Simply walking along the street near their university, these two young men were targeted for their beliefs, harassed with hate speech, and physically abused. The University Administration, in combination with local news sources, refused to even label the incident as a hate crime, preferring “hate bias” instead, which minimized the severity of the events.

Despite the controversial debate regarding the racist principles of the Trump administration, it is irrefutable that his election has given a platform to those once forced to keep their racism behind closed doors. The “rise and decline” of overtly racist regimes serve to support the assertion that the desire for power and superiority can be building blocks for racist ideology, according to George Fredrickson in his book Racism: A Short History. Whether it made an intentional decision or not, the university may have opened the door for potential future abuse by signaling a lack of commitment to fighting against cases of racism or anti-Semitism. The soft condemnation of the actions along with the short and inadequate investigation by Towson University and Maryland law enforcement further reinforce the southern traditional illusion of white power and legal immunity. Appropriate action and accurate news coverage along with university-enforced policies to punish hate crimes must be taken to quell the repetition of deeper institutional racism within the U.S.

The Towson incident brings about larger ethical implications regarding public desensitization to overt and subversive racism. In March of 2019, a group of Southern Californian high school students went viral to millions of people on Instagram playing “German beer pong,” with the cups arranged in the shape of a swastika and a few individuals raising their arms in the Nazi salute. The immediate public outrage was met with a stunning explanation: this was not an act of anti-semitism. Rather, the teens simply didn’t know any better. While this does not serve as an acceptable excuse, it does draw attention to an alarming issue: this generation of American youth does not understand the severity of using racist images and derogatory phrases, nor do they understand the historical implications of using these overtly racist symbols. The resurgence of racist ideology has taken a more subtle foothold in American politics and society, while education regarding the matter is severely lacking.

Although the statement by Towson University condemned racism, the words are empty without action. Even further, it could be perceived by those who prescribe to themes of racism and anti-Semitism as the beginning establishment of a new social order or hierarchy where this type of overt racism is allowed. Towson was one specific incident with only two direct victims. However, applied on a larger scale, the apathy and indifference of Towson University, the Maryland Police Department, the news media and the general public indicates a shift in societal values. Less than a year later, the California teenagers under fire for playing “German beer pong” illuminated the shocking lack of education regarding racism and anti-semitism administered to American youth. To combat such a deeply-rooted tradition will not be easy. However, active resistance and acknowledgement is essential in order to preserve the liberal nation America has struggled so hard to build. The youth of our nation must understand the severity of racist ideology, actions and symbols in order to actively prevent this resurgence of cultural racism.

Ashlyn Elliott
Ashlyn Elliott is a junior at the University of Southern California double majoring in International Relations and History. During the summer of 2018, she interned for the Egmont Institute- a royal think tank based in Brussels, Belgium that focuses on issues of security in the EU. Ashlyn is also interested in foreign affairs, particularly military security and diplomacy in the Middle East, the United States, and Eastern Europe. Outside of her studies, Ashlyn is on the e-board of the John Quincy Adams Society, and enjoys volunteering at a local German Shepard Rescue. Previously, Ashlyn served at the Special Events chair for Alpha Delta Pi sorority and on the e-board for Greek Intervarsity. A native of San Diego, California, Ashlyn loves surfing, yoga, traveling, and painting.